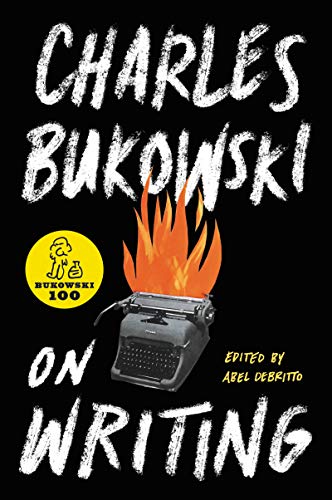 The oevre of Charles Bukowski, American cult poet of the latter half of the 20th century, is something akin to an Antarctic ice sheet that mysteriously keeps growing while you would expect it to melt away. Well over a dozen collections of poetry and personal letters have been published since his death in 1994, attesting to a lifetime of near ceaseless work. On Writing is the latest addition to this grand opus, a selection of letters—mainly to editors, publishers, fellow writers and so on—of unrestricted ramblings on the alleged essence of poetry, literature, and life.

You might sneer at the endless publication of “new” Bukowski material, even scorn Ecco for greedily exploiting their stash of his work. No less reason to admit that it was about time someone compiled Bukowski's meta-literary musings in an anthology.

The odd thought about the nature of writing springs up in many of his works, which seems natural given that he did little else for more than half of his life. From sentences such as "there is something about writing poetry that brings a man close to the cliff's edge" in Notes of a Dirty Old Man you could already guess that for Bukowski there was a precarious element in being a writer.

The letters in On Writing, covering the period between 1945 and 1993, dig deeper, giving you a much more well-rounded idea of what this kind of life meant for him. Their wonderfully implacable reflections on the struggle between the perilous pull and the affirmative force of his writing are revealing and often entertaining.

Reading about Bukowski's pleasure in writing—the same he takes in food, drink, and sex—is as upliftigung as the exploration of that unequivocally devoted, if not amorous, relationship to his typewriter is amusing. Notwithstanding his passion for the art, the effect his work had on him was ambiguous. “unfortunately or fortunately,” he wrote to an editor in 1969, “I feel my power more and more each passing day, each passing year, of course, there are minor lulls wherein I sincerely think of murdering myself and come very close.”

There seems to be no end to such conflicts in his letters. For one, that writing was synonymous with both life and death, that his poetry was at the same time the best and no good, and that he himself would be humble, and yet snootily self-assured. It might be a humoristic knack or a pathetic claptrap, but you cannot but believe that he believed in the truth of these contradictions. Be that as it may, it's a dialectic that's persuasive because it's realistic. There is no one way to look at success and failure, they never bob up single-handedly anyway. It's distinctly likable that Bukowski knew this.

It's not the existentialist vision, of course, but the derisive assessment of the literary scene that gives the ultimate flavor to the book. Shakespeare ("so bad"), Keats ("bag of shit") Faulker ("phony as greased wax") and Gide ("some fucker")—those are the main offenders, poor writers playing on empty subjects.

Expectedly, Bukowski's bashing knows no limits. It's not just the famous but the whole world of the written word that is shallow and corrupted. Editors are greedy vultures, art movements and intellectuals downright ridiculous, intelligent people "juggle his nuts." For him, the institutionalisation of art is equivalent to losing touch with life, and the formality that tends to accompany it is nothing less than a perversion of truth.

Bukowski is equally astonished and indignant with regards to the notion of normativity. To expect something from art, and to criticise what diverges from this expectation, is a restriction of free speech. Taking no prisoners, he advocates the freedom of creation with both quick wit and crude insults.

Apart from the delicious backbiting and the general insight into the creative process, however, a good portion of On Writing is rather dull. Bukowski's letters to his editors and publishers are often thankful, evaluative and generally shop talky in a banal way. Why editor Abel Debritto deemed it worthy to select lengthy descriptions of the submissions to various magazines, what they thought of his poetry and what he thought of them, I don't know.

For someone unfamiliar with the magazine scene of mid and late 20th-century America, this makes for a tedious read and would have benefited from a good trim. Nonetheless, it gives you a sense of just how well Bukowski knew this scene, and how consequently he analyzed the quality of the work it published. Despite his unrelenting condemnation, he was into it, really, and cared. About the state of art, definitely, and most certainly about the state of Bukowski.

Agatha Frischmuth is editor-in-chief of The Re|view where her fiction reviews also appear. She has both organized and presented at various literary conferences in Germany and the UK.