Wrede on Writing: Tips, Hints, and Opinions on Writing 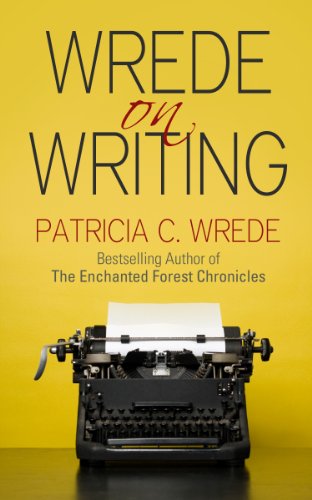 “. . . does provide excellent guidance on structure and mechanics . . .”

During my time at the publishing house formerly known as Harcourt Brace (now known as Houghton Mifflin Harcourt) I was lucky enough to be introduced to Patricia C. Wrede. Harcourt had just published Talking to Dragons, the third book in her amazing fantasy series The Enchanted Forest Chronicles, which began with Dealing with Dragons. I remember spending many work hours hiding in the stacks devouring these books, totally captivated and unable to put them down until they were finished.

Now, 20 years and countless books later, I am thrilled to have found Ms. Wrede's newest offering: Wrede on Writing: Tips, Hints and Opinions on Writing. Having read many how-to write books, I found the prospect of getting advice from a tried and true, successful author whose writing I admire much too good to pass up.

Ms. Wrede begins the book with a very prudent suggestion: "Take each and every piece of writing advice with a large boulder of salt." Just as there's an exception to every rule, not every writing tip works for everybody; and, writing suggestions shouldn't be viewed as hard and fast rules, but rather as a good foundation for finding what works for you.

To illustrate her point Ms. Wrede makes an excellent analogy about her mother, an avid cook, who tweaks recipes with her own personal flair that results in very enjoyable, yet difficult to emulate, food. The same premise should be applied to writing: take the basic recipe and add your personal touch.

The book includes something for every level of writing starting with the basics such as structure and word use and making the leap from concept to execution to more advance topics that include world building, efficient use, and implementation of flashbacks, and how to end a chapter (it ends with both closure and without closure). In addition to the what-to-dos, Ms. Wrede also includes a few words on things to avoid, such as the section Obsessive Overbuilding, where she cautions against going to the extreme on details.

By including illustrative examples and lessons from her own writing, Wrede does a great job of explaining not only the "what" of mechanics, but the "why."  In her eight-part Lego Theory a good amount of time  is spent on words and phrasing in regards to position of strength, which is helpful for most genres and levels of writing. Time is also devoted to the various points of view—i.e. first, second, or third person—with working examples of each. The various and sometimes perplexing sub-levels of third person are also discussed, taking away some of the confusion, though not all.

One of the things that most published authors have in common are the constant questions in regard to various aspects of writing, from where to get ideas to how to acquire an agent. Ms. Wrede has been nice enough to include many of these important questions, providing useful and thorough answers.

The final section discusses the emotions that come with being a writer, such as the fear of rejection or  not being good enough, the stress involved with both the writing and submission process, as well as the business end of things such as record keeping, writing query letters, administration (royalties), and publicity.

With so many books out there on writing it's difficult to know which way to turn. Wrede on Writing doesn't claim to be the end-all in how-to, but it does provide excellent guidance on structure and mechanics, thoughts and opinions on executing ideas and concepts, as well as solid suggestions on how to move forward once your book is complete.

Unfortunately, in writing there is no magic pill or one true way to do things. Finding one’s own voice and establishing a method is all part of the writing process—and the only way to do it is to just dive in and write.