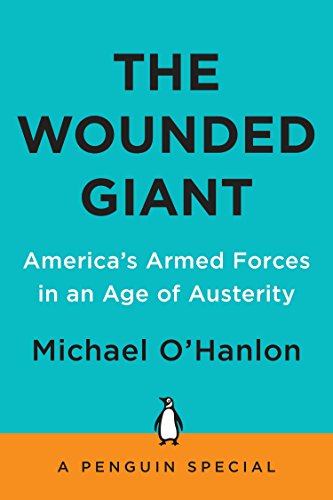 “Many will disagree with Michael O’Hanlon on essential points. But the level of debate is what counts so that our armed forces are supported by intelligent strategic decisions. No more lies about ‘weapons of mass destruction.’ No more promises to achieve policy objectives where they are completely impossible.”

Let’s talk about lateralisms. The reader recognizes, of course, that I am talking about multilateralizing multipolarity.

You see, once there was only a bipolar world—this was when the U.S. and the Soviet Union faced off in the Cold War. As one pundit put it recently in the Chaillot Paper #209 for the Institute for Security Studies: “Basically, the post-Cold War ‘unipolar’ world turned ‘multipolar,’ and as a result the West can no longer tackle global issues—made more pressing indeed due to this very transformation—on its own any more than it can deal singlehandedly with regional crises. . . . the West must be able to define together with other world and regional powers the norms and rules that are needed to drive concerted efforts to stay clear of some future clash of competing unilateralisms.”

Out of many . . . we’ll pick a few . . . and create “multipartnerships,” the neologism favored by Secretary of State Hillary Clinton. Howdy, partner Saudi Arabia. Bad on you, partner Israel. . . .

The utter incapacity of the defense establishment to formulate logical thought would be funny if the consequences not so damned tragic. The abject failure of U.S. policy in Afghanistan is one of those consequences. Soon Russia and China will replace the NATO forces there and carve up the spoils.

The U.S. happened to agree to those two countries’ participation in the war effort just about five years too late. We had to run the war effort ourselves, of course, and what a mess we made of it. And surely the mess in Iraq is just as much our fault. The people who send our heroic armed forces into these places with so little preparation should be called to account.

You have to ask yourself why we have computers running scenarios at the Department of Defense? This writer has tried, unsuccessfully poring over the defense budget and various related publications, to find out how many Crays (supercomputers) the DoD has purchased in the past 20 years. There must be at least 100 of them running scenarios in some basement of the Pentagon. Yet not one of them foresaw the possibility of an attack on the World Trade Center with hijacked airplanes?

Michael O’Hanlon’s book on how to plan our future military spending does not answer the question about the Crays. But it does do two very good things: It makes sensible and well-reasoned proposals about how we should plan for future conflict based on intelligent analysis of hard data. And it makes that analysis accessible to the general reader. You would not think crunching military budget numbers could make such pleasant reading, but Mr. O’Hanlon brings a bit of expository style to his policy wonking.

The premises are, however, somewhat difficult to accept. Mr. O’Hanlon maintains that the U.S. is still at the center of an essentially unipolar world order that brings about 80 countries into an alliance with us.

“The United States has achieved many, if not most of its post-World War II aims. The world we see today is a reflection of its foreign policy successes, not its failures. Most of the world’s wealth and strength is found among its allies or friendly neutrals. The international system works well for most major countries, and even would-be challengers like China or Russia are unlikely to see much benefit in challenging it fundamentally. By embracing its successes—and the diffusion of global power that they have helped to produce—the United States can probably do what no global superpower has ever done before and remain as strong as ever even as power disperses somewhat. That said, it can do so if its responses are proportionate to the challenges ahead, and neither inadequate nor excessive.”

This is a coherent and historically accurate conclusion—one may violently disagree with it, of course—but it is sound. Yet contrast Mr. O’Hanlon’s conclusion with what you hear from Senator Barney Frank on defense cuts: “Although terrorism is often harder to combat than traditional armies, anti-terrorist efforts are generally less expensive than long, drawn-out wars because terrorists do not possess the same, advanced technology.” What kind of analysis is that?

Add to it a little Ben Franklin imitation: “You can stop making people shoot each other, but we can’t make them love each other,” said Frank. Cute, Barney. How many of our soldiers will die for that bit of cheap populist whimsy?

Here’s Barney Frank on the threat of China: “We're told we have to contain China. And I think we overdo that. Again, I do not think that China is prepared to commit economic suicide by shutting down the sea lanes.”

How would that be economic suicide for China? Is that their only option? Is that a comprehensive assessment of potential military threat? Nice to see our leaders hard at work in Washington.
Mr. O’Hanlon, at least, tries to work out the possibilities: “On balance, as a defense analyst, I would describe China more as a friend than an adversary. But, if China is a friend, it is a friendly rival, and an extraordinary capable on at that, one whose rise to superpower status threatens to shape 21st century politics. History teaches us that, whenever such hegemonic shifts occur in world power distribution, the risk of war goes up. . . . This does not mean that the United States should simply double down on its military capabilities; we need to hedge against the possibility that China’s rise could go badly [thus making it more aggressive], that is the right prescription for minimizing the chance of war. . . . We should not go out in search of dragons to slay around the world, but neither should we close our eyes to the possibility that such dragons do exist.”

China is, itself, in such a state of rapid evolution that no one knows what will happen there. The entire government will be rejiggered next year. No one really knows how that will play out, especially if our economy doesn’t pick up. Can we afford to lack the means to affront an aberrant threat from China? Certainly not. Let the experts argue about the best means to do so, but let it be the result of intelligent thought, not some facile soundbytes.

Mr. O’Hanlon gets right down to the specifics when it comes to analysis like this:

“Admittedly, too, our military is tired. Up to two million committed Americans have been part of the wars since 9/11 in one capacity or another; hundreds of thousands have deployed not once but twice to Iraq and Afghanistan; more than six thousand are dead, and more than thirty thousand have been seriously wounded. . . . Yet most of its men and women take rightful pride in what they have accomplished over the last decade. . . . Yes, the military has nearly doubled its real spending since 9/11, from around $400 billion in 2001 to around $700 billion annually a decade later (expressed in 2011 dollars). But almost half of the increase was for wars that are ending.”

Here is author O’Hanlon’s “bottom line” assessment in The Wounded Giant. Our defense budget should consist of sufficient monies for:

• deterring an assertive Iran in the broader Persian Gulf and Middle East.

• helping keep confidence and stability in East Asia in the face of a major structural change—or, put more bluntly, hedging against a rising China, should it become more aggressive.

• keeping a sufficiently robust NATO alliance to provide some basis for global action by a community of democracies and to lower whatever remote risks remain of Russia’s again becoming disruptive.

• maintaining enough combat capability to wage one substantial and extended regional war while also carrying out two to three smaller operations at a time.

• Retaining a reliable and safe nuclear deterrent that is the equal of Russia’s and superior to China’s, even as the United States pursues lower force levels through arms control.

• retaining and promoting the world’s best scientific and defense industrial base.

• maintaining some capacity to help stop genocide as part of a coalition.

Michael O’Hanlon crunches the numbers and gets right down to what pieces of equipment the armed forces should forego in order to maintain the priorities he outlines above.

Many will disagree with Michael O’Hanlon on essential points. But the level of debate is what counts so that our armed forces are supported by intelligent strategic decisions. No more lies about “weapons of mass destruction.” No more promises to achieve policy objectives where they are completely impossible.