Wound Is the Origin of Wonder: Poems 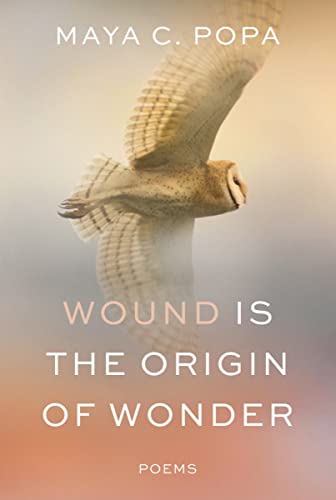 “What are days for if not to let go of days,” Maya C. Popa writes early in this second collection of poems following her award-winning debut, American Faith. The absence of a question mark signals appropriately that Popa's speaker is not requesting an answer so much as she is acknowledging an insight hard-won and gleaned after significant loss, which—as demonstrated throughout the rest of the poems in this collection—is twinned with experience and choice, one's lived experience.

In Wound Is the Origin of Wonder, Popa's elegant and moving exploration of grief and its causes and manifestations is more nuanced than simply observing that loss and living go hand-in-hand. A loose narrative unfolds through the collection, beginning with a number of lyric poems touching on separation from an intimate other, as in “Longing Explained by William James”: "a sort of slow vanishing/your image from every vantage/absented.”

The first and second sections of the book address this separation and subsequent mourning as a kind of catalyst for its central concern, which is how our capacity for wonder originates with vulnerability, our ability to be wounded. (The word wonder, the book's epigraph reveals, “is thought to be a cognate with the German wunde or wound.”)

Popa dissects not only the physical longing that occurs after love—"about the animal of the body, I have learned/it's in no hurry to be sated or stilled./It lives to serve the error that confounds it,” she writes in “Genii Loci”—but also wrestles with our emotional and intellectual dependence on The Other, which is perhaps only realized most fully once The Other is gone. These epiphanic moments are captured in poems such as "Letters in Winter":

It will be spring, I say over and over.

I'll ask that what I lost not grow back.

I see how winter is forbidding:

It grows the heart by lessening everything else

and demands that we keep trying.

In the book's third section, the narrative moves into poems that contemporary readers can associate with the pandemic—although one of the significant achievements of these poems is the way they manage to speak to that particular devastation and yet also feel dateless, germane to human suffering no matter the decade or century. While the collection's publication date coincides with a decrease in deaths from COVID and a general dilation of society across the globe, Popa's language shies away from being locked to the category of “pandemic poetry” (a term that isn't intended as a pejorative, but is nonetheless very much of a moment).

In this culminating section of her book, Popa manages to address suffering and grief in a way that feels urgent and timely, but also timeless. She evokes markers of the pandemic’s onset and the rising instability of both the natural world and civilization in poems such as “Letters to Noah's Wife”:

Lately, I worry every black dress

will have to be worn to a funeral.

Anything but illness, I beg the plagues,

but shiny crows or nuclear rain.

Not a drop in London May through June.

I bask in the wilt by golden hour light

with any precision how others lived,

or else, it is a tax paid disbelievingly.

and nothing to lessen the undoing.

As the speaker in these poems looks to reconcile herself to the absence of an intimate relationship, the world shifts and she must confront a solitude even deeper than what she felt before: “It’s plain we didn't see/the future coming. Even spring/came and left as a surprise” (“Les Neiges D'antan”). The isolation of quarantine, the limits of circumstance and fate, “the self-same sorrow said a different way,” (“Signal”) become the moments around which Popa wrestles with grief and its constancy while also marveling at how her life persists, at its constancy as in this from “There Must Be a Meaning”:

It's the way with some things too sweet

to be lived out. I've buried you each day

in the dirt of a life I keep tilling,

dazzled by the sunlight that tenders it,

the rain amending her position midair,

Wound Is the Origin of Wonder opens with a poem titled “Dear Life,” wherein the poet acknowledges “I can’t undo all I have done to myself,/what I have let an appetite for love do to me.” In this poem, the poet feels Life’s "hook . . . too keenly" and asks Life to “loosen the line.” It's a daring if not ominous way to begin a book of poems. By comparison the closing poem, “Spring,” feels less dramatic. The speaker’s voice is softer, more weary—but also, less wary.

After one reads all of the preceding poems that weary voice feels earned, and maybe more true, than the opening poem's fraught one. It might be that “Spring” embodies not Life loosening its hold on the speaker, but the speaker granting herself some slack and acknowledging—somewhat begrudgingly—what she cannot control: “Time persists, yes, I can see there are new branches.”

There's no pretense at a happy ending for this collection, just a quiet, honest, moment of calm, because nothing has truly ended. Popa allows that, despite personal and global suffering, the world—and the poet’s response to it— persists: “Color is pouring back into the hours,/” she writes, “or forgiveness, whatever the case may be.” And with the collection’s final line she poses another not-a-question so that we might allow our focus to skip over fleeting happiness and instead fixate on what holds more value: “When joy comes, will I be ready, I wonder.”

Sarah Kain Gutowski is the author of Fabulous Beast: Poems, runner-up for the 2018 X.J. Kennedy Prize, winner of the 14th annual National Indie Excellence Award for Poetry, and a 2019 Foreword INDIES Finalist. Her poems have been published in The Threepenny Review, Painted Bride Quarterly, The Gettysburg Review, and Phantom Drift: A Journal of New Fabulism. She is a professor of English at Suffolk County Community College.