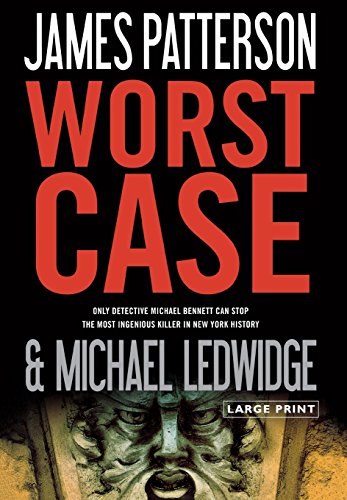 James Patterson’s name appears first and foremost in white lettering on the top of the cover of Worst Case, followed by the title and then, in gray lettering, the name of Michael Ledwidge. Perhaps this is how it should be. Patterson is immediately recognizable as the seminal author of detective series novels, whereas Ledwidge is arguably not so well known, at least not yet. To his many fans, Patterson’s style is high, wide, and handsome, even though it’s had some pretty heavyweight criticism in the past. Ledwidge’s, on the other hand, is noir-ish, urban, and dark. And, although these writers have collaborated before, it was interesting to see how the two styles might compliment or kick against each other in Worst Case. Set in New York, Worst Case is about a disillusioned kidnapper wants to make people sit up and take notice of the corporate misuse of the planet’s resources. To this end, he abducts and kills the children of the filthy rich, having first subjected them to a Q & A session about the exploitation of the Third World. Failing to answer every question correctly will earn the victims a bullet in the brain. It’s obvious from the start that this is no ordinary kidnapper. There’s more to him than the average abductor-for-money and he’s certainly a complex piece of work. Mike Bennett, a hard-boiled New York detective, is teamed up with Emily Parker, a hot-shot FBI agent from Washington D.C., to solve the case. Bennett and Parker immediately hit it off together and there’s a sexual affinity between them that may or may not be consummated. Both are likeable enough characters, if perhaps a little predictable and no more than the sum of their parts, as they try to catch up with the highly intelligent and surprisingly philosophical killer, who quotes T. S. Eliot and can speak Latin. Bennett realizes it’s going to be difficult to deal with a kidnapper who doesn’t seem to have any demands, but the NY cop manages to form a bond of sorts with the man over the phone as he explains his motives and attempts to justify the killings. The narrative is uncluttered by too much exposition and displays an intimate knowledge of New York City which, together with the Irish back-story, hints strongly at Ledwidge’s input, rather than Patterson’s. The short chapters are made for easy reading and give the pace of the story the staccato effect of Parker’s Glock forty-caliber. The repartee between N.Y. cop and FBI agent, as they bounce off each other, is both hard-edged and humorous, in a lively, peppery, Mickey Spillane mode. Tension mounts as the M.O. of the kidnapper changes, forcing Bennett and Parker to re-think their assumptions about him and re-examine their almost non-existing leads. Is this third abduction a copycat crime? Is there another psycho out there? We are also left puzzling throughout why, if the kidnapper-killer wants to get his social message across, he doesn’t go YouTube with the Q & A sessions, instead of just explaining his motives to an unsympathetic Bennett over the phone? Or why he doesn’t realize that killing young people will turn public opinion against him, no matter what his message is, and simply kidnap and kill the rich, instead of the children of the rich. His motives are revealed, however, as the breakneck resolution roller-coasts at increasing speed round New York City. The kidnapper-killer is identified at last and Bennett and Parker must use all their combined resources to foil his Machiavellian plan. The final manhunt culminates in an edge-of-the seat showdown at the Stock Exchange on Wall Street, where a single gun-shot can mean the difference between deliverance and disaster. On the whole, Worst Case is an entertaining and light-footed read. The narrative runs on ahead of itself and the dialogue is gritty-real, ricocheting from the pages, and chipping against the eardrums. Bennett’s cosy family life, on the other hand, is all-American in its sentimental self-consciousness, contrasting with the flintiness of the rest of the story. If the book is clichéd and a little pretentious in parts, it can be forgiven insofar as it is clever and informed in its analysis of the problems of the world and is intelligent in its assessment of the causes of those problems—even if it ultimately rejects the solution.