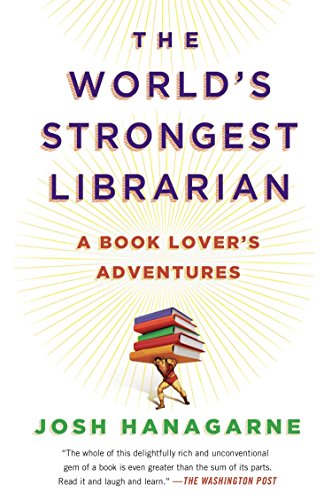 “A thoroughly delightful book replete with humor, colorful writing, and an easygoing style . . .”

“People stared. Even holding the gaze of another person was too heavy. I screamed. I walked. I screamed. I scratched myself. My arms waved about, striking at invisible swarms of beets. Tic tic tic tic tic. I slapped my face and chewed my lips until my eyes watered.”
—Josh Hanagarne

The old adage—Into everyone’s life a little rain must fall—does not apply to Josh Hanagarne.

Rather, at the age of six the skies opened up and continued to drench him for the next three decades. Readers of The World’s Strongest Librarian will have an opportunity to walk in Mr. Hanagarne’s soggy shoes as he relates his contentious relationship with Tourette’s Syndrome and the effects it’s had on him personally, professionally, and spiritually.

Those unfamiliar with Tourette’s will gain an education while reading this book. Mr. Hanagarne paints a very clear picture of what happens when he is in the grip of “Misty” or “Miss T” as he refers to his condition. Although the first thought that comes to mind when anyone mentions Tourette’s is the uncontrolled and often foul language that flows from a person’s mouth, there is much more to this illness. In Mr. Hanagarne’s case, the physical flailing, punching, and inability to remain still for any length of time outweighs the grunts and sporadic yips that escape his lips.

But make no mistake, this book contains no whining, complaining, or blaming. Mr. Hanagarne clearly illustrates the details of his Tourette’s but does so with grace, honesty, and quite a bit of humor. Obviously well read, he sprinkles many literary references throughout the book. It’s no wonder he landed a job at a library.

As for that job, how on earth does someone who has little control over the noises and movements his body makes become a librarian? It’s not easy, but the author’s secret weapon in the library’s basement keeps him on track.

But before he lands in the hallowed halls of William Shakespeare and Stephen King, the author travels a rather bumpy road that involve family dynamics, church, childhood, and all the aspirations, follies, and terrors of growing up with Tourette’s lurking in the shadows ready to pop out, often at the most inconvenient times. His efforts to force Misty into “retirement”—from medication and a nicotine patch to a quirky faith healer and Botox injections—are comical and touching.

Readers tag along as Mr. Hanagrane attempts to live out his Mormon responsibilities; he offers much insight into this religion and the obligations it places on its members. Nonjudgmental in his approach, he doesn’t hide his personal ambivalence about the denomination.

This church comes to play a bigger role later in the book as he and his wife try to adopt a child, further complicating his indecisive relationship with Mormonism. The church’s “Plan” demands its members “do more good things than bad things, repent of the bad things, you’ll be rewarded.” But Mr. Hanagrane preferd his father’s definition: “This is the church of Don’t Be a Dick.”

Family serves as a central theme in the book, first the one into which he was born and later, his own. A genuine throwback to the television families of the ’50s, the Hanagranes set aside Monday as family home evening, where they “. . . played games, told jokes, went to the movies, occasionally had scripture study . . . we did what we wanted and we did it together.” This unequivocal and sincere affection helped the author weather the roller coaster ride that inevitably comes with Tourette’s.

The title of the book hints at one of the ways in which Mr. Hanagrane manages his condition. While family and his own determination provide a solid foundation, a strenuous workout at the gym succeeds in banishing Misty, if only for a short time. The author’s father deserves the credit for introducing Mr. Hanagrane to the wonders of heavy duty exercise. Once the author discovers this magic elixir, he becomes a true believer. For the hour or so when he lifts weights, the tics subside.

At one point, the author meets another exercise enthusiast—actually a true fanatic—who literally helps to beat Misty into submission. But when the tics return, unaffected by his previously successful weightlifting program, Mr. Hanagrane takes his father’s advice to “hike up his skirt” literally and enters the Highland Games, ancient Scottish athletic events that involve throwing weights, stones, logs, or sheaves of straw. And of course participants must wear a kilt.

Throughout the story, there are times when the author slips, when life throws him a curve he can’t handle. And for a while even the strict workout regimen takes a vacation. Mr. Hanagrane’s tales of his rocky social life, as the reader might imagine, would make good fodder for a situation comedy.

A thoroughly delightful book replete with humor, colorful writing, and an easygoing style, The World’s Strongest Librarian will draw in readers from the first chapter. As a librarian, the author hopes to impart a lesson or two. As a person held captive by an elusive condition that impacts every aspect of his life, he attempts to offer hope for other sufferers. In both these endeavors he succeeds.