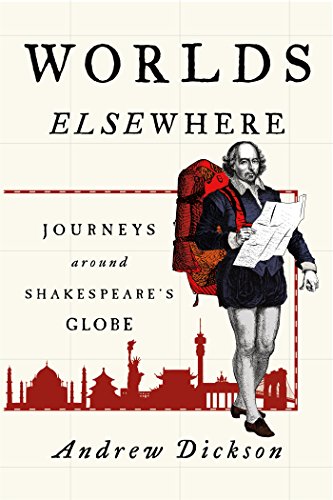 Andrew Dickson is former arts editor at the Guardian, was at the 2012 Shakespeare festival at the Globe Theater in London highlighted by productions of Shakespeare from all over the world and performing unexpected translations and adaptations. As Dickson watched A Comedy of Errors staged by Rah-e-Sabz (Path to Hope) an Afghanistan troupe performing the play in Dari Persian, he observed, “It occurred to me . . . this story of journeys, mistakes, confusions, misplaced identities-being in a strange land.” Why were Shakespeare’s plays and poetry resonating in other cultures and languages centuries after they were written?

Dickson decided to investigate more and his book Worlds Elsewhere: Journeys Around Shakespeare’s Globe is a fascinating theatrical travelogue that explores Shakespeare’s impact in various countries around the world. Early on Dickson dispatches any conspiracy theories about Will’s authorship of the world’s most performed collection of plays, and makes his case for Shakespeare as being a singularly prolific, visionary actor-playwright whose creative imagination was a big bang in the theatrical universe.

Shakespeare did not travel much, but, Dickson asserts, he lustily studied histories and various cultures and was not above stealing plots from other playwrights, determined to present them in a heightened theatrical versions. The starting point is Stratford and London where the Globe and Fireside Theaters were populous cultural hubs for the British masses. But after Shakespeare’s death, as Dickson reports, his plays were actually banned in England on moral grounds; amazingly, they were already the rage elsewhere in 16th century Europe.

The British soon realized what they had and theater artists and academics rescued Shakespeare’s authentic editions of The Quartos actors’ scripts from the Globe. The official First Folios were printed and Britain eventually reclaimed Shakespeare as their genius author. Voltaire was in London in exile from France for insulting a nobleman, and attending Shakespeare productions, went from deriding them for their innovative devises, then completely embracing Shakespeare as the dramatist of his age. But what if the universality of Shakespeare was an illusion? What if it really was a Eurocentric fantasy to think that Shakespeare naturally had relevance everywhere?

Dickson recounts the first globalization of Shakespeare via British actors who toured to such Bardian meccas as Gdańsk, Poland, where a theater was built to stage the plays. In his chapter Hamletomanie Dickson tracks the phenomenal theatrical lineage that kept the Bard in currency around the world. Germany even tried to claim him as “our Shakespeare” to recast Shakespeare as having German origins even as literary titans Goethe and Schiller played fast and loose with the plays. Repatriation reached the pit of grotesqueness in the Nazi era, where Joseph Goebbels, Hitler’s propaganda henchman, used certain plays as vaunted propaganda.

Dickson travels across the U.S. in search of Shakespeare past and present in his chapter Buried Richards. He digs into the Folger Shakespeare Library in Washington, DC, first with its priceless collection of Shakespeare’s official, but in their time, commonplace first edition folios, now only numbering worldwide in the hundreds, each ever increasing in value. Folger’s forensics on the comparative text and most accurate copies from the earliest editions is breathtaking literary science, but gets a bit heavy going.

He livens things up for himself (and readers) as he heads west to find that as much as Shakespeare was starting to be revered in academia, he was equally embraced by 18th century American audiences across socioeconomic lines. One staging of Othello had in its cast no less a personage than Ulysses S. Grant as Desdemona when he was a clean shaven military cadet in Texas. And new affordable editions of the main plays were readily available. In California even the ’49 gold-rushers knew their Shakespeare soliloquies better than, Dickson reports, many college students would today.

The chapters on pre and post liberated India and South Africa are the most illuminating in the book. In colonial India, he recounts the backstage dramas of Indian Bardians trying to make it as actors as the country was breaking away from Britain. In the chapter Gurudeva the Bollywood Boom reclaims the Shakespearean canon, with filmmakers raiding the plays for plots, themes, characters, and dizzying contemporary mash-ups of Hamlet, Romeo and Juliet, Othello, King Lear, and The Taming of the Shrew, among others.

“William Shake—The Sword” is most incisive and backstage thrilling. Dickson interviews the cast of an inspired improvisational performance of Julius Caesar, translated to multiple South African languages with the actors switching parts at any given time during the performance—symbolic of post-Apartheid culture—and proving the adaptable strength of Shakespeare.

South African linguist Solomon Tshekisho Plaatje translated Shakespeare’s plays in South Africa, where he was also a native South African journalist and equal rights activist in the early 1900s, and a founding official in what became the African National Congress. But however well-intentioned Plaatje intended his efforts, Dickson writes “by attempting to bridge two cultures, Plaatje had trapped himself in no man’s land.”

Clement Doke, a colleague of Plaatje, openly wondered whether “other types of literature are not at present much more urgently needed in Setswana than this.”  And who could fault such a backlash as British colonialism was putting in place the mechanisms of Apartheid. Othello, not surprisingly incited myriad sociopolitical baggage. First presented by a touring company in the early 1800s in Cape Town, with many productions to follow, were both blatantly racist while other productions served as exposés used to lacerate the injustices of British white supremacy.

Dickson was mesmerized by a company from Shanghai performing The Revenge of Prince Zi Dan aka Hamlet and another troupe staging a Mandarin translation of Coriolanus. On his journey to China he investigates how Communist China Mao’s regime, embracing the writings of Marx and Engels, came to view Shakespeare as a "keen observer of Class war." The literary and metaphysical aspects of the plays and verse were embraced by Chinese scholars in the 1800s as a populous tool for modernist ideas. Chinese Theater scholar Shen Lin explains to Dickson that Shakespeare is popular in China because the plays are "Ideological."

Dickson’s wry, chatty writing style keeps this for the most part getting too dense, but some of the detailing does get distracting. Yet Worlds Elsewhere is without doubt an important book, a trove of information on the history and living theater of Shakespeare. As Dickson reports the evolution of Will’s universe with continue to expand as long as All The World (continues) to be a Shakespearean stage.