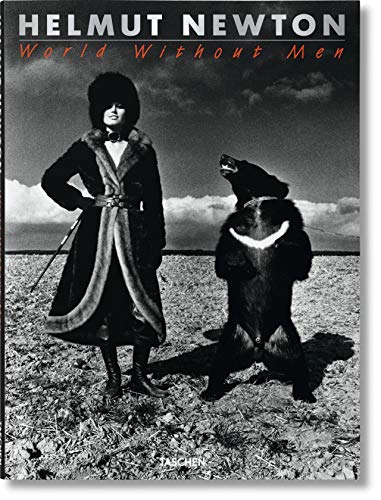 “. . . a crash course in some of the greatest fashion photographs of the 20th century.”

Looking for a reason why books should still exist as printed matter? Here is an outstanding one: World Without Men is a prime example of a book that shines. Of course, this is all predicated on your being a Helmut Newton fan or having a great love of photography and fashion during a golden era.

There are a few ways to look at the volume by the late Mr. Newton: aesthetically through the lens of his photography and thought processes and intimacy required to create them, or hierarchically via their place within the pantheon of legendary photographers of the 20th century. For this reviewer, there were images I have grown up with which have been seared into memory for over 35 years; and then there are those at which I marvel—the imagination that went into bringing each of them to life!

World Without Men is a crash course in some of the greatest fashion photographs of the 20th century. If you are easily offended by nudity, eroticism, or a bit of perversity, then by all means move on. Mr. Newton was the precursor, if not inventor, of edgy photography—and yet he always delivered the ultimate product without ever sacrificing the subject matter through prurience.

As Grace Coddington said in her autobiography Grace, “I liked it better in fashion when fashion came first.” Mr. Newton’s images are outrageous, controversial, always memorable, and certainly never commonplace or boring.

The text in the book is derived from Mr. Newton’s personal journals that provide the explicatory foundation for all the images—and yet even without words, the book would tantalize as simply a visual feast. The time period covered is from the 1960s through the 1980s and contains many of the greatest designers of that time as seen on the editorial pages of some of the world’s greatest and most iconic magazines, filtered yet again through the eyes of the visionary mind of Helmut Newton.

A minor criticism is that you have to wait to till the very end to recover the origin and date of each photo. Small price compared to overall presentation and organization.

With so few books ever published on Mr. Newton’s body of work, World Without Men demands its place in your library of fashion and/or photography titles. You can look at it as a pictorial diary from one of the most revered and eccentric masters of fashion photography.