The World That We Knew: A Novel 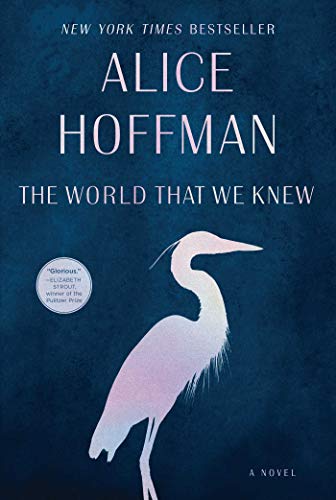 “Different kinds of mystical pairings are beautifully interwoven throughout the pages.”

When this novel focuses on the magic parts of its story, its language is magical:

In Nazi-controlled Berlin, “There were more demons every day, so many, there was no longer any room for them in the trees or on the window ledges. They walked through the streets as if they were men.”

A young girl hiding in a convent learns to speak the language of herons, and as others overhear the birdsong, “Some of the girls began to cry and others laughed out loud. The sisters remembered things they had long forgotten.”

But the rest of the time, when The World That We Knew is a historical novel about how four Jewish teenagers struggle to survive the Holocaust, it’s pedestrian.

Luckily, the plot is a page-turner. (How could a story of escape from evil, by a bestselling pro like Alice Hoffman, not be?)

The novel is also saved by the passion of its non-magic theme: the depth of a mother’s love. In this case, the mother is Hanni Kohn, the Jewish widow of a doctor in 1941 Berlin, who hopes to save her 12-year-old daughter Lea by invoking a golem, a mystical Jewish creature made of mud. There have been several major novels in the past two decades about golems, and each one differs somewhat in the details, but essentially a golem has superhuman strength, needs little or no food and sleep, and is unflinchingly loyal to its designated human.

Hanni pays Ettie, the unusually learned 17-year-old daughter of a local rabbi, to create a female golem that they name Ava. Crucially, Hanni pours a vial of her own tears over Ava’s eyes, silently commanding the golem: “See as I see. Do as I would have. Be who I might have become.”

Ava, Lea, Ettie, and Ettie’s younger sister Marta all manage to arrange train tickets to France. However, Marta is killed en route, and Ettie is separated from the other two.

Through five main narrative strands, The World That We Knew traces their paths over the next three years.

Lea and Ava first stay with Lea’s wealthy cousins in Paris, where Lea and Julien, the younger son, fall in love. After a magical heron warns Ava about the impending Nazi mass roundup of Jews, she and Lea flee to a convent in the Rhone Valley, then to a small village deep within a forest “almost completely cut off from the rest of the world, a place known for taking in refugees.”

As with many adventure novels, there are too many characters to keep track of. Even worse, the point of view switches frequently, sometimes in mid-paragraph.

The novel’s main weakness, however, is that Hoffman seems to get bored when she’s not writing about magic and just grabs the nearest cliché.

Ettie is beautiful (although she refuses to believe it) and a chess whiz after only a few games. Victor is handsome and the best driver and explosives-maker in the Resistance. (His “scar had only served to make him more handsome.”) Julien is an excellent artist, mathematician and runner and a favorite teacher at the refugee school and has “fierce dark eyes that were flecked with gold.” What is this, a YA romance?

But the magic in this novel draws the reader as powerfully as Ava and Hanni’s love work to save Lea.

Different kinds of mystical pairings are beautifully interwoven throughout the pages. There’s the Jewish concept of the world we know and the world to come, and another set of worlds, the happier worlds that Lea, Ettie, and Julien barely remember and the horrible world they now inhabit. As well, Lea’s grandmother has taught her that the world consists of hunters and wolves. When Lea meets a wolf in the forest, “they knew each other and they could feel one another’s loneliness.”

The greatest magic in this novel is humankind’s enduring capacity for love— a love that survives even in the midst of the most evil human behavior. It persists in Hanni’s love for her daughter, and in the romantic love of Lea and Julien, and also in Ava’s growing humanness. When she and the heron dance, “Ava looked luminous as she danced barefoot, and sometimes she threw her head back and laughed with delight.”

If only there had been more magic—not just in this novel, but also in the actual Holocaust, so that more people could have been saved.