The World: A Brief Introduction 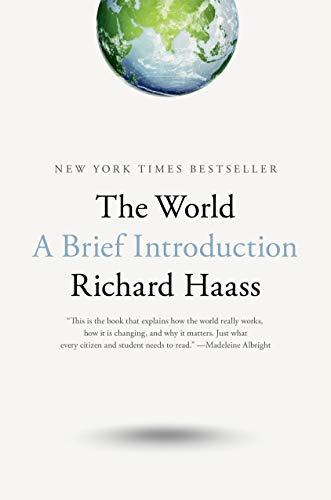 Richard Haass, President of the Council on Foreign Relations, provides the reader with a comprehensive analysis of our world—a valuable guide for every alert citizen as well as for scholars and students of international affairs. He  seeks to offer a path to “global literacy”—a filter by which to interpret the news and think about the big issues of our time, warding off the prejudiced partisanship that envelops our senses.

Haass begins with the historical setting—the main events from the Thirty Years’ War to our present post-Cold War era. Next come brief but authoritative studies of the world’s key regions such as Europe and the Middle East.

Somewhat more controversial are the author’s discussions of global issues such as terrorism, nuclear spread, and currency problems. Although much of what Haass writes should be familiar to readers of major newspapers, many will be enlightened by the author’s descriptions of the World Bank, the International Monetary Fund, and why the US dollar remains the world’s most used currency. On development issues, Haass distinguishes foreign aid meant for humanitarian aid to cope with crises and efforts to boost long-term development. He underscores the positive contributions of improved education and technical training and legal protections for private property.

Most controversial is the book’s final section on order and disorder—all the elements of chaos and those that have been integral to the liberal world order. In all these discussions, there is a right-of-center tilt, one that finds comfort in “realism” and worry about “idealism.” But the author’s most urgent  concern is with the Trump administration and its subjective choices that are neither realist nor idealist.

The key to order, for Haass, is a stable balance of power—not some hope that actors, guided by ethics or law,  will exercise self-restraint. While some self-styled realists see nation-states as the only essential actors on the world scene, Haass notes the often important roles played by local governments and non-governmental actors such as corporations, Greenpeace, the media, religions, and—not least—terrorist networks.

However, Haass argues that the United Nations has had little impact on world order because its most powerful members seldom agree on vital issues. Hence, we live in “international systems” rather than an “international society.” To be sure, international laws and courts exist and do help to regulate some international behavior, such as diplomatic immunity, but they do not prevent governments from going to war when they believe it useful. China is claiming most of the South China Sea even though a court at The Hague says it has no grounds to do so. There is one shred of good news: most fighting for years has been within states—not between them.

The “liberal world order” is rule-based and has evolved since 1945, buttressed by a bipolar and then by a unipolar world. That order has fallen apart thanks to the rise of China, hyper-nationalism in many countries, excessive use of force by the United States, and the complex challenges of globalization.

A new, improved world order needs to be formed. It would keep the World Trade Organization, for example,  but tighten rules to prevent abuse by a China that now has the world’s largest GDP. To build it, the United States must change its behavior to be seen again as a benign—not malign—actor.

To do so will require policies that rely less on military force and other forms of bullying. A new world order led by China would be illiberal; however, it is unlikely that a viable new world order could be based on a coalition of medium-sized democracies in Europe, Asia, and Canada. A reformed United States remains what others have called the “indispensable” leader of a liberal world order. Some observers see this change as improbable unless Democrats win all three branches of government in November.