A World Beyond Physics: The Emergence and Evolution of Life 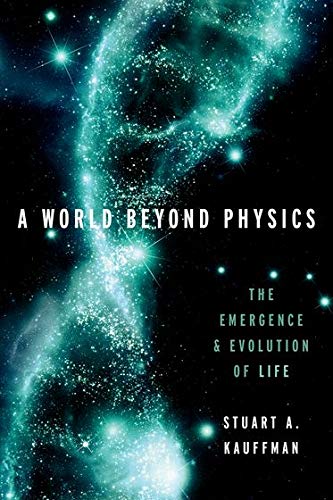 “the generalist interested in how the world works can scour A World Beyond Physics with great benefit. The book summarizes many facets of contemporary science and presents a viewpoint that, whether one agrees or not, is worth deliberating.”

A World Beyond Physics can serve as a primer for learning about science and, more generally, life—from individual psychology to the dynamics of macroeconomics. Kauffman’s thesis is the world is not a machine. Life does not evolve in any deterministic mode. Many features of physics seem to follow laws articulated by Newton, Einstein, Schrödinger, and others, but even these grand theories can conflict with each other and do not give us the entire picture. At any rate biology—the evolution of life in all its various forms—does not follow the laws of physics. No one can prestate how most things will develop. All facets of life emerge from “adjacent possibles”—the new and often unforeseeable consequences of innovations in technology and the idiosyncrasies of each human’s thoughts and actions.

Is this thesis mere common sense? No. It contradicts the featured article headlined on the cover of Scientific American for July 2019: “How the Mind Arises”—how networks in the brain create thought, by Max Bertolero and Danielle S. Bassett. Their study of brain networks is a marvel of nuanced detail but not, Kauffman would say, their conclusion. They adopt mathematician Pierre-Simon Laplace’s explanation of mechanistic determinism and apply it to the brain. One’s mental state, they say, is a “compilation of past states that can be used to predict the future. A neuroscientist who knew all the principles of brain function and everything about someone’s brain could predict that person’s mental conditions—the future, as well as the past. . . .” If we knew what was already in someone’s brain, we could predict their future thoughts and, by implication, their actions. “With enough engineering ingenuity, we may develop implanted devices that alter or even generate new brain networks or edit genomes” so as to prevent mental disorders.

The Scientific American article jibes with the views of Nobel laureate in physics Stephen Weinberg, whose views Kauffman counters. Weinberg argues that the explanatory arrows always point downward from social systems to people to organs to cells to biochemistry to chemistry and finally to physics. The more we know of the universe, the more meaningless it appears.

Against Weinberg, Kauffman argues that no laws at all “entail” the evolution of the biosphere and that reductionism, Weinberg’s dream of a final theory, fails at the watershed of life. The explanatory arrows do not point downward from functions such as hearing to physics but upward to the selection of organs that abet hearing. The process of selection acted at the level of whole organisms as hearing evolved. That is why such organs exist in the universe.

Weinberg, according to Kauffman, belongs to the same tradition as Laplace: the world amounts to a huge machine. God has retreated to serve as the grand watchmaker who set up the world with its initial conditions and let Newton’s laws take over—a blight on Shakespeare and other poets’ natterings.

Weinberg, says Kauffman, omits the crucial force of agency. Kauffman argues: “We are agents playing our complex, filigreed games with one another. . . . This complexity is part of the complexity of the universe.” The emerging biosphere explodes into the exploding adjacent possibilities that life itself creates. It includes ever new, unprestatable functions that only come to exist because they abet the survival of the organisms having those functions, for example, eyes and sight.”

The reader need not take sides on these debates without deep study of the basic materials. But the generalist interested in how the world works can scour A World Beyond Physics with great benefit. The book summarizes many facets of contemporary science and presents a viewpoint that, whether one agrees or not, is worth deliberating.

Besides the insights into biology, Kauffman’s arguments about the emergence and evolution of life have profound relevance to current debates about protection of the environment and all the life forms under threat from human and other forces.  Our adjacent possibles, we learn every day, can have destructive as well as positive effects on the marvels of being.

Reflecting on this book, the reader may well embrace Albert Schweitzer’s concept “reverence for life” as the fundamental principle of morality: “that good consists in maintaining, assisting and enhancing life, and to destroy, to harm or to hinder life is evil.”

Kauffman became a medical doctor, a theoretical biologist, and a complex systems researcher. He has held professorships at the University of Chicago and University of Pennsylvania and was awarded a MacArthur “genius grant” in 1987. He is the author of seminal works such as The Origins of Order and Humanity in a Creative Universe, also published by Oxford University Press.

Full disclosure: Kauffman and I met in 1955 as counselors at a camp for diabetic children. As a junior in high school, he was then writing a musical but knew enough philosophy—mostly by intuition and common sense--to help me, a recent grad of Notre Dame’s great books program, to cope with the contradictions between St. Thomas Aquinas and David Hume.

To underscore the range of scientific viewpoints being debated, Scientific American authors Basset and Bertolero teach and do research at the University of Pennsylvania, where Kauffman is an emeritus professor. Basset, like Kauffman, has been a MacArthur Fellow, and leads a Complex Systems Group. Whether these individuals follow Descartes or not, each seems to accept his belief, “I think. Therefore I am.”

Walter Clemens is Professor Emeritus of Political Science at Boston University. He is the author of more than 20 books, including Complexity Science and World Affairs. His many articles on both domestic and international affairs have appeared in scholarly journals as well as The New York Times, The Washington Post, The Wall Street Journal, and other leading newspapers in various countries. His latest book is The Republican Virus in the Body Politic: How to Reboot America.