A Work in Progress : Notes on Food, Cooking and Creativity(Hardback) - 2013 Edition 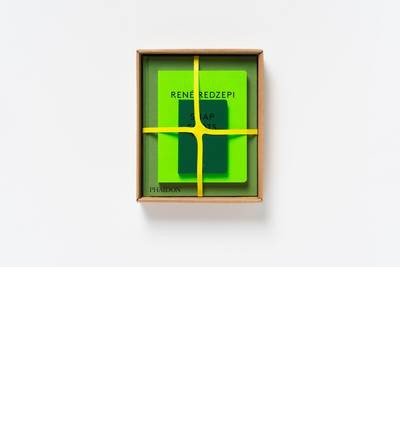 Food trends, like fashion, are largely a top down proposition. You may never own a Versace or a Chanel, but chances are there is a distant cousin hanging in your closet.

The same goes for food. Traveling to Barcelona and plunking down hundreds of dollars to eat at elBulli back when it was considered the best restaurant in the world may not have been in the cards for you, but you have probably tasted some variation of the culinary foam for which its chef and owner, Ferran Adrià, was celebrated.

It matters what high-end chefs are doing in their restaurants today because a version of it may end up on your plate tomorrow.

Like many chefs, René Redzepi was a troubled youth who found his way into a kitchen and discovered his calling. He honed his modernist culinary sensibilities as a young chef working at the temple of modernism, elBulli, where he learned to turn out twenty-course meals built on innovative cooking techniques and flavor combinations.

He returned to his native Copenhagen to open Noma, a restaurant featuring modern Nordic cuisine in 2003. In 2010 Noma unseated elBulli as the best restaurant in the world at the World’s 50 Best Restaurants Awards and René Redzepi released his first cookbook, Noma: Time and Place in Nordic Cuisine to critical acclaim. He also founded the Nordic Food Lab in 2008, a nonprofit organization established to explore Nordic cuisine. All this by the age of 33.

René Redzepi is a man on fire. Not content to rest on his laurels, he seems to be constantly pushing himself to break new culinary ground. A Work in Progress reflects this drive.

Like the restaurant on which it is based, A Work in Progress is unconventional with a mix of both high and lowbrow elements. It is packaged as a plain looking three-volume set that is bound together by a rubber band. Unwrapping the package, you will discover in ascending size, Snap Shots, a pocket sized book of candid photos taken at Noma; René Redzepi Journal, a plain paperback designed to look like a composition notebook set in typewriter font; and finally the end product, Noma Recipes, a hardback book with beautifully photographed dishes—each one a presentational masterpiece—that were created during the 12-month journaling period.

Once you tear yourself away from all the drop dead gorgeous photographs in Noma Recipes (all the while thinking how beautiful they would look as framed art hanging on the walls of your home) the place to start is the journal with cross-references to both the snap shots and recipes.

It won’t take long before it dawns on you that A Work in Progress is a groundbreaking work of genius. Yes it is sometimes challenging to juggle three volumes at once (and the teeny, tiny page numbers in Snap Shots seems unnecessarily mean to those of us with older eyes). But that is the point. Redzepi is deliberately trying to challenge us to not only rethink our understanding of the cookbook format but also to reconsider our notions about what is edible.

“Food is everywhere” writes Redzepi. If elBulli was known for culinary foam, Noma is known for foraging. Redzepi draws his inspiration from the natural world making him something akin to a culinary David Thoreau.

The journal is an edgy, knotty, sleep-deprived look at the creative process inside one of the world’s leading restaurants where 16-hour days are the norm, and the mood is thick with tension. But out of this frenzy Redzepi manages to turn the humblest of ingredients into a fine dining experience—albeit one that tests the limits of his diners.

Over the course of 12 months, Redzepi and his team create 100 new recipes and experiment with new cooking techniques like dehydration and fermentation as a means to intensify flavors.

He also experiments with new ingredients and here is where he is testing the boundaries of what people are willing to eat for large sums of money. It takes a leap of faith to bite into a live fjord shrimp to get that in the moment, fresh-from-the-ocean flavor experience.

And it is at this point that you begin to realize that Noma and its modernist brethren are more about creating an experience rather than actual dining. This is performance art, and you, dear diner, play an integral role.

Or is it conceptual art? His use of fish scales and leek bottoms to create dishes that are referred to as ‘trash cooking’ are distinctly reminiscent of Marcel Duchamp who famously signed a urinal and called it art. If René Redzepi serves it to you, it is food.

Or is it? What are the limits of what we consider to be food? Will you happily play along when served a beautifully composed plate with live ants frolicking on a dollop of crème fraiche next to a pretty bouquet of mixed tender greens? Or will you balk as one dining couple did.

Redzepi writes, “‘Why are you making us do this?’ they demanded. ‘Because they’re delicious,’ I said . . . I told them that we’re finding a new range of extraordinary flavours. And that’s why we do it—not to shock them.”

He goes on to reflect, “The couple refused to try them, and I’m worried it might be an omen of hurdles to come. It’s a big step to take, and I wonder if we’re really ready for it. If you don’t serve them [the ants], there won’t be any problems, I tell myself. But the fact that there seems to be a nonsensical objection to eating insects, perhaps tinged with a bit of Western self-righteousness, just pisses me off. When it really comes down to it, the incredible flavours have got to me, and there’s no turning back now.”

As the title suggests, René Redzepi is himself a work in progress. Now in his mid-thirties he is still a relatively young chef who has many years ahead of him to refine his ideas and express his creativity.

Gosh, I hope it wasn’t because of the ants.