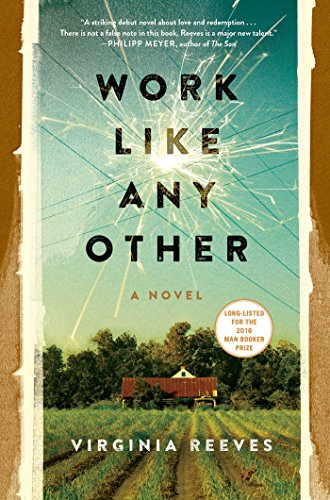 When you’re on the last few pages of a book and find yourself longing for more, then you know that it is a very powerful read. Such is the case with Work Like Any Other. Author Virginia Reeves has delivered a commanding, dramatic novel of life in 1920s Alabama, inside a family torn apart by anger, resentment, shame, guilt, and desire.

This is a deeply gripping portrayal of Americana in the Deep South, replete with racism, violence, and heartbreak. It is astonishingly well-written, particularly for a debut novel. Reeves delivers powerful heartrending scenes of despair and hope. The reader is immersed within a family torn apart by guilt, yet connected by an undercurrent of love. Reeves paints magnificent scenes with expressive and direct language. Her characters are well thought out and deeply permeated with emotion.

Roscoe T. Martin is an electrician who loves his city job, but he is forced to leave it in order to live with his wife and son on her family farm, work he finds distasteful and unrewarding. His true love is working with electricity.

After Roscoe decides to skim electricity from the utility company for their house and farm equipment, a lineman for the utility company is electrocuted working on the wires that Roscoe has altered. Roscoe is sent to prison, along with the kind farmhand he talked into helping with his scheme (“Wilson”). Martin’s prison life is filled with agony and despair. But Wilson is black. In 1920s Alabama, the life of a black man is valued only for hard labor in unforgiving conditions. Instead of prison, Wilson is leased out to a mining company, where he loses an arm in an underground explosion.

As Roscoe begins his prison sentence, his wife, Marie, abandons him with their young son. She visits Roscoe in prison only once, obtaining his signature on divorce papers when he is barely conscious after a severe beating. Their son, Gerald, desperately wants to maintain contact with Roscoe, but Marie won’t allow it. The price for his crime is too much for her to bear. But the story is much deeper than that. She unconsciously despises Roscoe after their son is born and her uterus is severely damaged, preventing future pregnancies. This guilt and associated anger is transferred to Roscoe.

Roscoe befriends inmates and does his best to perform various jobs at the prison, some of which are dangerous and distasteful. His physical and emotional strength deteriorates. Roscoe is stabbed by a prisoner within an inch of his life. Later he is beaten severely by a guard, resulting in permanent nerve damage in his arm. And each day he falls farther away from the family that he loves but is unable to retain.

Guilt is the common denominator in this novel. There is no more powerful emotion, and Reeves weaves it intricately and perfectly. Here we find shattered dreams, moral failure, empathy, and compassion tied to a perfectly well-grounded story, with dialogue and scenes reminiscent of the time and place.

Work Like Any Other is astonishingly beautiful and tender, with finely honed, haunting characters and dynamic dialogue. Reeves adeptly employs metaphor, uses alternating first and second-person perspective, and wraps it all within a non-linear format.