Wordslingers: An Epitaph for the Western 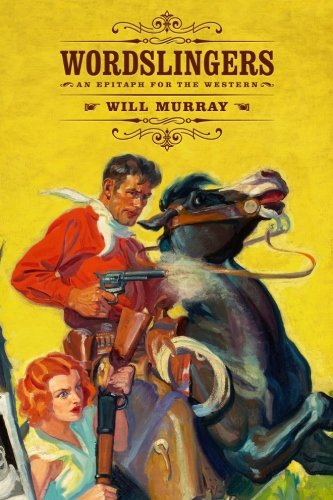 As a measure of how impressive these sales are consider that they happened at a time when the population of America was around 122 million. This was before radio and at the same time movies were growing.

Because of their price and portability pulps tended to be passed on to other readers—resulting in a lot of folks enjoying the medium.

This incredible wave of love for westerns lasted for decades. Combined with the earliest movies—for what appeared on screen influenced western writing and vice versa—these pulp classics helped shape the way many of us look at a America’s history.

The only problem is that this history is false, shaped by years of deliberate misrepresentation and manipulation. Looking to sell books and make money, editors and writers built story after story creating a romance about cowboys, gunslingers, and the west that is almost entirely fiction.

The evolution of the western tale as compared to the harsh reality of prairie and western life is just part of literary history covered inside Will Murray’s Wordslingers: An Epitaph for the Western.

From America’s earliest western-themed tale The Leatherstocking Tales by James Fennimore Cooper, until the genre’s eventual collapse after decade upon decade of formula and redundancy, Mr. Murray covers every aspect of western pulp history imaginable. The backstory of genre’s earliest days is fascinating.

After the Civil War factories and manufacturing developed to produce weapons and clothes often retool. This helps speed the development of mass printing and the train brings about massive changes in distribution.

The modern western formula essentially begins with the dime novels. Based on the stories of Buffalo Bill and published under the pen name Ned Buntline the template that would serve westerns for the next 50 years begins to take place.
These become the fictionalized conventions of the modern western novel.

There are the action packed heroics, horses, bar fights, and everything else with which we are now overly familiar. As the industry develops, so does the template for success.

These changes don’t happen overnight. But by the start of the 20th century the system to get readers to buy cheap magazines and books was in place. This unprecedented upsurge in printed material needed writers. By the 1920s it needed lots of them.

The number one ingredient to getting published was action. Stories needed to start with a gunshot, a dropped card, stolen cattle or anything else that was part of conflict. There was no room for characterization or emotional growth. The mutation of the formula is just one of the ideas at the core of Mr. Murray’s history.

One of the most valuable parts of his research includes a look into the world of writer’s magazines that were being published at the time. Using Writers Digest and other instructional magazines, he constructs a parallel history of how the formula evolved.

These magazines were designed to help new writers get published. It was a function that served the seller and the publisher, for western pulps were chewing up stories faster than they could keep up with.

Each issue held interviews with editors, successful writers and hints about how to get published. Even at a penny a word, writers were anxious to get into print.
In the twenties movies were feeding the desire for pulps and the content of pulps was driving what movies featured. Both industries paid close attention to what was working for the other.

As the American economy expands and contracts over the following decades so does the pulp industry. As these changes occur Mr. Murray brings life and energy to the scramble being made by editors to find out what the public really wants to read. The way these changes come about is as interesting and involved as the western stories being published.

In addition to the magazines and stories they hold, Mr. Murray also focuses on the life of the writers and how they create. He documents their struggle in a marketplace where for several years no one wants anything but violence and non-stop action and a year later sales have dropped tremendously.

Factors such as the depression of 1929, the economic dip of 1937, and Hitler marching into Poland in 1940 are just some of the other ways that deeply affected the western stories being told. While these cannot be ignored, the quality of the stories themselves was an important part of the magazines rise and fall.

Over time readers grew tired of an obvious adherence to a strict formula. The editors had even to begin to acknowledge this in print. Published letters began to bemoan the familiarity of it all.

But a few months later westerns always seem to be reborn. Only this time instead of a lone gunfighter the character may now be a lawyer going from town to town encountering adventure and even, of all things, a woman.

With artwork opening each chapter that is taken straight from the original pulps themselves, Mr. Murray’s dissection of this once popular genre crosses all lines. Incorporating political, personal and world histories, the two dimensional world of the western pulps becomes three dimensional.

Filled with lively characters (both real and fictional), the noise of pistols and rifles in the air, the sound of horses racing over dirt and raising dust, the confusion of editors and publishers, and the terror of a writer who needs to sell a story to feed his family, Mr. Murray gives life to a corner of popular literature.