The Words That Made Us: America's Constitutional Conversation, 1760-1840 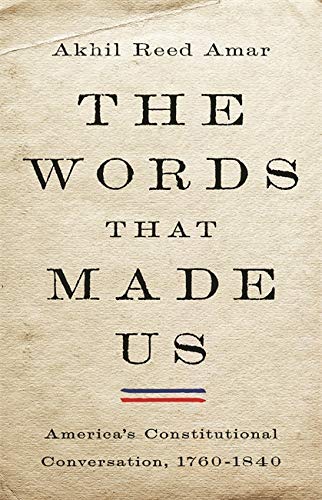 Every once in a while a book comes along that can simultaneously enlighten and engross you by taking a seemingly esoteric subject and turning it into an absorbing page-turner. Professor Amar has penned a marvelous tale of how our uniquely American Constitution came to be and the larger than life characters that conceived, gave birth, and nurtured our system of self-government.

What makes this volume stand out from the first page is the seamless way he melds history, political science, and legal scholarship to take the reader on a journey to understand the legal, philosophical, and political roots of our founding documents and the government they spawned.

As he points out in his conclusion, "Too few law professors know history, and too few history professors know law." This sums up the entire motivation of the book as the reader begins, appropriately enough for a professor of law, with a critical court case in 1761 that becomes the genesis for the entire voyage to show how our current system of government came to be.

The journey continues through various summations and applications to American political thought and jurisprudence of the political writings of Enlightenment thinkers like John Locke, the legal precedents of English common law, the significant differences between the unwritten English constitution and the written American version, and the unique discourse of burgeoning colonial legal minds like John Adams, and James Otis.

Although Professor Amar does not shy away from complicated legal topics and issues such as the actual precedence set by famous legal cases such as Marbury vs Madison (it's not as important as most high school courses say, according to his legal analysis) or what a writ of assistance is, he does not bog the reader down with too much legal jargon and explains all of these highly technical legal issues with an ease that makes sense to the average reader while moving the narrative briskly along.

These sections of the book will particularly appeal to legal students who want a better understanding of the practical application of the Constitution to the numerous early court cases that arose to interpret the intentions of the founders.

Professor Amar also does a superb job of tying together seemingly unrelated events such as the drafting of the Northwest Ordinances and the Louisiana Purchase into the Constitutional realm, showing that the Constitution, while truly a watershed document in the evolution of self-government and democracy, was not entirely unprecedented, but could be better described as the amalgam of decades of practical experience in self-government by colonial legislatures combined with the harsh lessons learned from the Articles of Confederation and the experience of fighting for independence from England.

Most importantly, he does not shy away from controversial topics such as the role of slavery in forming the constitution via the Three-Fifths Clause and the very solid legal argument that secession was in fact illegal under the Constitution. The role of slavery in both the formation of the Constitution and the settlement of early legal cases involving property, taxation, and the voting power of southern states are laid out without undue bias, clearly showing the behind the scenes presence of southern concerns for the potential abolition of slavery from the founding of the country, either by taxation or diminution of the Three-Fifths Clause.

Readers may be surprised to know that many Congressmen considered the 12th Amendment, which changed the rules of Presidential elections in the wake of the highly contentious election of 1800, an opportunity to eliminate that clause, an opportunity that was rejected by slave holding Thomas Jefferson and a solid southern bloc of Congressmen.

However, the Constitution was only so many words without sharp and patriotic people able to make it work. This is the measure of the book that will appeal to history students. Professor Amar presents the expected cast of characters—George Washington, Alexander Hamilton, Thomas Jefferson, John Adams, James Madison, and some other characters perhaps not as familiar: John Marshall, Joseph Story—and others that all played critical roles in making the early American republic work—mostly.

The reader may be surprised to find out how much the experience of the Revolutionary War shaped the structure and early implementation of the American government, particularly the need for a strong economic system, power of taxation, and robust presidency to “provide for the common defense,” both Washington's and Hamilton's greatest desire in the wake of their wartime experience with an often ineffective Continental Congress.

Although these men were certainly giants among the Revolutionary generation, they were also complicated politicians who could be vain, greedy, petty, and partisan, and Professor Amar does not shrink from showing their flaws as well as their virtues. Americans who think that a partisan press, fake news, and scandal-mongering are recent scourges of American politics may be surprised to learn that our Founders were just as adept at mud-slinging and backstabbing as any modern politician. It is gratifying to know that even with their own human weaknesses, they were able to craft a system of government that has endured for over 200 years.

There is much to unpack in this volume's 800+ pages, but it is well worth the effort and the chapters seem to fly by with Professor Amar's engaging and conversational writing style along with his incisive and balanced analysis of the critical events, people, and documents that made American not merely a collection of states, but truly the United States of America. In the postscript, he hints at the potential for two more volumes to complete his Constitutional conversation. One can only hope they will be as perceptive and engaging as this volume.