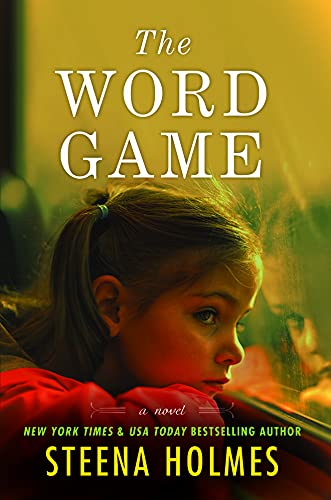 Of course no one should expect chick-lit or mom-lit to be well written. These beach reads are propelled not by beautiful language or deep characterization, but by plots that dramatize the worst fears of single women (my best friend will steal Mr. Right!) or mothers (my child will be kidnapped! my daughter will be sexually molested!).

But they do have to have a plot.

Ending Chapter One with the phrase “what could go wrong?” is not a way of building plot tension.

For the first 50 of its 207 pages, The Word Game by Steena Holmes consists solely of clichés, TMI explanations of every character’s job and motives, cute squabbles between happy couples, and a few ominous hints. Apparently, at a co-ed slumber party of 10 to 15 year olds, a few girls and boys were found in the boys’ room doing something that wasn’t serious enough for the host parents to get really upset about (presumably, some sort of heavy making-out).

The main character, an accountant and mother named Alyson Ward, is—as she tells us on pages 2, 7, and 11—“a control freak” who has never before permitted her 10-year-old daughter Lyla to attend a sleepover. (Nor eat much sugar, nor speak German with her German-born grandmother.) Finally, Alyson relaxes enough to let Lyla join her cousins and her dance classmates at the aforementioned sleepover party at Alyson’s sister Tricia’s house.

At around page 50—that is, one-fourth through the book—Alyson learns that more than heavy necking has been secretly going, although not at the party. Lyla says that Keera, one of the other preteen girls, has been repeatedly molested by her stepfather (who all but twirls his Snidely Whiplash mustache in some of the earlier chapters).

That revelation leads to a new batch of ominous warnings in the form of half-finished sentences hinting at Something that happened in Alyson’s childhood. For instance, Alyson’s father starts to say to her mother, “Ever since she was little and—” at which point the mother conveniently interrupts him.

It takes another approximately 50 pages for the plot actually to get complicated, as different characters convincingly give different responses to Lyla’s accusation. Has Keera been abused or not? Who is lying? Now the pages can’t fly rapidly enough.

The problem is that with this genre of fiction, the reader shouldn’t have to slog through fully half of the book to get hooked.

And with the dreadful writing, it really is a slog. In a single paragraph, the Wicked Stepfather is “sadly mistaken” and also “in for a rude awakening.” As the kids eat pizza at the fateful slumber party, “the mayhem in her kitchen knew no bounds.” (The only further description of said mayhem is that the girls either sat at the table or stood at the counter.) But never fear: Less than 48 hours later, “it seemed likely today was the day of reckoning.”

As the bestselling author of several such light-lit novels, Holmes should know how to pace her narrative better than this. Perhaps The Word Game is an unfortunate example of how, after a stream of hits, no editor dares to touch a successful writer’s work.

In which case, this book is also proof that no author is above the law of good writing.