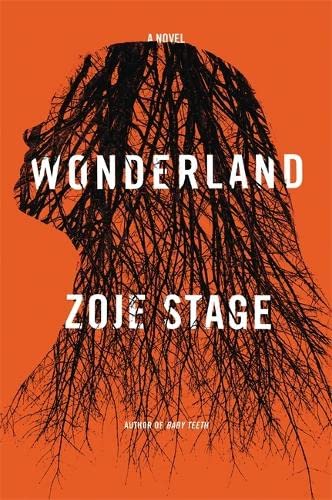 “An unseen entity will test the defensive power of maternal love to its utmost. . . . Wonderland is a subtle and haunting nerve-wringer.”

When ballerina Orla Bennett retires, it’s husband Shaw’s turn in the spotlight, and he declares his independence by moving his family—Orla, nine-year-old Eleanor Queen, and four-year-old Tycho—from New York City to a farmhouse in upstate New York where he grew up.

For the children’s sake, Orla makes the move an adventure, but secretly, she fears it may become something else. She tells herself it’s simply because she’s no longer the focus of attention, but she can’t be sure.

“Her life was gone. And the landscape unrecognizable. Her husband would never say it but it existed in the silent space between them. My turn. We agreed. Your part is finished. The curtain had fallen and wouldn’t rise again. And she was afraid of the dark.”

The farm isn’t large, but there’s definitely more space than in their New York apartment. Being alone in the quiet takes more adjusting as the winter countryside manifests itself in odd ways.

There’s the aurora, a fabulous light display in the sky, seen by no one but the Bennetts. A blizzard blows in while the children are outside, so sudden and blinding they barely make it the few feet back to the house.

While out hiking, Shaw stumbles on the ruins of a cabin, and that image stays with him as he makes his way home.

It’s the first subject he paints. Learning the cabin was a cure cottage, a home for terminal tuberculosis patients in the early 20th century, he researches the architecture and restores the cabin on canvas. Afterward, looking through an old history book left in the farmhouse, he gets a shock.

“He flashed her a page from the book, a black-and-white photo. ‘This is the chimney. Look. And the cabin I painted looks exactly the same.’

‘Are you serious?’ Orla squinted at the washed-out title on the spine: The Settling of Saranac Lodge Village.

‘This is the chimney I found. That’s what I painted. I’m dead serious—that is our land!’”

Shaw is elated by the discovery, but Orla sees it differently.

“‘People came here and died. Of tuberculosis. In our backyard. Maybe our land is haunted by people who died here?”

The most unsettling thing, however, is the pine tree, a 500-year-old giant, dwarfing the trees around it.

Shaw says it speaks to him. It inspires him. Orla has to agree. His paintings are beautiful, often whimsical, occasionally disturbing. Daughter Eleanor Queen says she also feels an affinity for the giant pine while Orla and Tycho feel nothing.

Perhaps it’s the isolation, the sudden change in environment, but all Orla senses is unease and dread. Shaw shuts himself in his studio, creating more and more bizarre paintings. Eleanor Queen becomes hostile, talking back and becoming disobedient.

A second blizzard seals the family inside the house with no phone service or internet, forcing Orla’s fraying nerves to the snapping point. Shaw becomes distant, forbidding anyone entrance to the studio, but Orla forces her way inside—to find him with a shotgun, resting against his mouth.

His explanation is an incoherent ramble.

“‘Someone, something needed me. I couldn’t let it in. It kept pushing at my consciousness—In, in, in, it said. It scared me, Orlie. What if I couldn’t stop it? It’s bigger than me, stronger.’”

Orla offers the only solution: “‘We’re gonna get out of here.’”

It doesn’t happen. The snow prevents escape, and soon, Orla discovers the entity haunting Shaw has turned its attention to Eleanor Queen.

What is the connection between the giant pine, the ruins of the cabin, and the patient who died there? What does the thing want?

Winter and snowfall always bring a sense of isolation, even for those living in a big city, as if a blanket of white becomes a barrier to more civilized aspects. As the others adjust to their new home, it initially seems only Orla is affected simply because she’s no longer the center of attention, removed from her natural habitat, the city. The odd things happening are explained away as part of their new environment, happenings one wouldn’t experience in a city, events occurring only in the remote countryside.

Gradually, through Shaw’s experiences and then Eleanor Queen’s dreams, the insidious idea of possession creeps in. There’s an entity in the forest, somehow connected to the giant pine that lords itself over the other trees. Its age alone sets it apart, and somehow, it knows the secret thing attempting to invade the family’s minds and lives.

Eventually, it will become a battle of wills between Orla and this sentient essence inhabiting the tree. An unseen entity will test the defensive power of maternal love to its utmost, and the outcome is the revelation of a haunting future for all.

Wonderland is a subtle and haunting nerve-wringer.