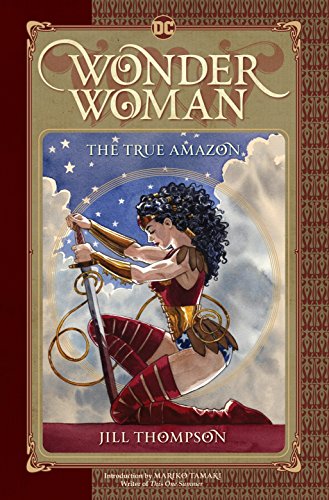 Released in 1968, Music from Big Pink by The Band changed the musical landscape. The acoustic, harmony-rich, Ozark and Mississippi root rush of the music made by the Band was 100% against the psychedelicized grain of the times.

In Wonder Woman: The True Amazon, writer and illustrator Jill Thompson has created the warmest, most natural, and clearest story of Wonder Woman’s seventy-five year career.

The apocalyptic cynicism of the modern age has no place in this tale. Thompson’s origin of Wonder Woman is fully human, filled with a sense of responsibility and definite purpose. Which makes the eventual outcome so ultimately painful for everyone. It doesn’t matter if you are the parent or child, some lessons in life arrive too late. Cynicism is easy, dealing directly with the real world has painful consequences.

It all begins with the simple language of a fairy tale. “Once upon a time there was an island in a distant sea,” writes the artist and writer as we float with her across water moving toward the home of the Amazons. Like fairy tales often do, a moral, an ideal or a lesson that may or may not be larger than the story itself begins to slowly take shape.

When we then meet Zeus, Hera, and Herakles, we hear the story as a myth being told while listening to the Gods speak. In keeping with tradition, Thompson affords the Gods their own level of very human behavior, holding them up as a mirror to mankind.

With lightning bolts striking out from his eyes and a majestic robe flowing as if the winds of the spheres were personally dressing him, Zeus stands revealed as the ultimate expression of cruelty attached to power. From Hera’s own treachery toward her husband to Herakles’ greed and lust, the Gods stand as mirrors to mankind’s own behavior, often echoing the shallow pettiness of the men who live on the earthly streets below Mt. Olympus.

Thompson is shaping a deeper meaning and stronger sense of personal identity than we have seen in a Wonder Woman story before. The Amazon ideal finds that there is a dignity in loyalty, to an ideal larger than yourself while still being true to who you are.

At the end, we, like the heroine in the title, begin to step into the reality of the modern world. Yes, Wonder Woman is leaving gifts from the Gods such as a lasso and bracelets and the girdle of Alethea. But all Diana knows of them is what they stand for, not their real power. That she will need to find out down the road.

From her earliest days in the Golden Age, the art featured in a Wonder Woman story has often stood apart. In 1941 there were the thick lines of original artist H. G. Peter; his slightly brutish ideal of compact, Olympic perfection did seem odd but were perfect for the time.

In the late sixties a powerless, rail-thin, Emma Peel-style fashion icon took over for a while. As brilliant as George Pérez’ reimagining in the eighties was, (it set a standard that Thompson clearly equals), Wonder Woman was still essentially lily-white perfection. No matter who drew her, Wonder Woman bore little trace of ethnicity as her apparent Greco-Roman roots would seem to demand.

Thompson’s island of Themyscria is filled with women of all races and body types. It isn’t Paradise Island. There are problems. Thompson doesn’t cheat the reader with cheap heroics. These are real people with attitudes and problems. Not idealized stereotypical comic book buxom lasses.

Page after panel testifies to the wisdom of Thompson’s decision to write sparsely as her art matches the beauty of Amazon ideals while retaining the touch of comic fantasy. Her image of Poseidon is one part Mad Hatter and two-parts brilliantly colored plant-man. No one in history has shown a Poseidon such as this.

Occasionally Thompson seems to be tipping her hat to other incarnations of Wonder Woman. An early panel focusing on the gods holds an outline of battle that resembles Alex Ross’ Kingdom Come. At another point Wonder Woman drops from the sky in dark silhouette, ready for battle just as she did in Frank Miller’s Dark Knight Returns.

Wonder Woman, more than any other comic book hero, has come to mean something much larger than the medium itself. Gloria Steinem famously chose her for the cover of the first issue of MS. Magazine in 1972. The name of the character has become a slang term for a woman who can do it all. With the magic of Thompson’s art and the story she builds, much of that sociological importance falls away as you become lost in the world that Thompson has created for Diana and the Amazons.

From her work with Neil Gaiman on Sandman for DC, to her own Scary Godmother title, Thompson has been creating incredible work for decades. As Music from Big Pink once drove Eric Clapton to put down his psychedelic blues and reevaluate his entire musical being, Thompson’s Wonder Woman: The True Amazon will cause a few others to question how they tell stories and draw modern comic books.

There is no other book in comics today that you could hand to a 10 year old, this year’s graduate student who specializes in the work of Joseph Campbell, or a Supreme Court Justice and get the same reaction: “This speaks to me. And it is gorgeous.”