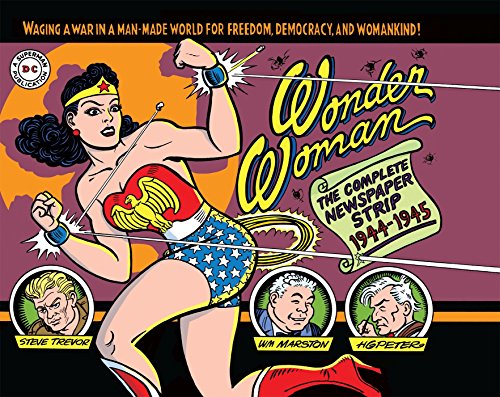 “Historically important as well as wildly entertaining, Wonder Woman the Complete Newspaper Strip (1944–1945) is the find of the year for everyone who loves adventure, history, women’s studies, comic books, and heroes.”

Since her first appearance in All Star Comics #8 (December1941) Wonder Woman has, for a million reasons, become an icon to millions. As the first widely successful female superhero in comic books she is considered to a groundbreaking achievement in the medium.

It wasn’t just that she was a female superhero who could tangle with the best and most rowdy of men. Her origin lay in something much deeper and more complex than almost any other hero on the newsstands of the day.

That origin and her subsequent adventures are beautifully bound together in a new collection from The Library of American Comics, Wonder Woman the Complete Dailies (1944–1945). For the first time ever the complete run of newspaper comic strips featuring the world’s most famous Amazon have been gathered in one place.

Since most folks only know her from the comic book, the seventies TV Show featuring Linda Carter or animated cartoons such as Super Friends or The Justice League, these strips will come as a revelation. They also serve as the perfect introduction to what makes Wonder Woman great.

This collection brings retells her rich and complex origin beginning inside the first months’ worth of newspaper dailies.

We are introduced to the idyllic world of her early life on Amazon Island. A brilliant spotlight shines on the stories behind her magic lasso, the reason her bracelets so easily deflect rounds of ammunition and that famous invisible plane.

The motivation behind her move to America and her adoption of an eagle as part of costume are an important part of her success. One of the biggest reasons that she has lasted all these years is her association with patriotic ideals. Ideals that we discover lay far back in time among the Greeks who first outlined the democracy that lay the foundations for this country.

Wonder Woman’s origin is markedly different from that of other heroes. The idea for Superman came from the world of science fiction and those behind the creation of Batman pulled his dark origin from the world of pulps and crime.

Her origin comes from a deeper tradition of storytelling that is filled with gods, goddesses, and mortals. She is something modern with more than a touch of classical studies. Above all, her beginnings come from something positive and born of an ideal for peace.

As glorious as this all sounds. Bruce Canwell’s introduction reminds us that just underneath it all lay a somewhat subversive and not-so subtly sexually charged hero. Almost all of which is due to her creator, the Harvard educated psychologist Dr. William Moulton Marston.

As part of the advisory board for DC Comics in the forties, he had long advocated for the introduction of a female hero into the world of comic books. Challenged to create just such a character, he created Wonder Woman.

It is impossible to separate the influence that Dr. Marston’s own life and beliefs brought to the strip. He supported the idea of a matriarchal society and was quite open in his belief that, for various reasons, women are superior to men.

While he was married his wife had allowed a second woman into their marriage. Together, they all carried on as a trio for decades. This was a revolutionary lifestyle in the thirties. His beliefs clearly infused the early years of Wonder Woman.

The opening panel of the second week of dailies shows Ares, God of War and Aphrodite, Goddess of Love are looking down from the heavens on Earth. Ares says that “We men shall rule with the sword.” Aphrodite quickly replies, “My women will conquer with love.”

The words “rule” and “conquer” highlight the difference in the way that the two Gods think. It also reinforces the contrasts in the way that Dr. Marston believed the two genders approach life.

The comic book was notorious for its scenes of bondage and since many of the stories for the newspaper run were adapted from the book, those scenes are still prominent.

In a strip dated May 19, 1945, we see Wonder Woman bound to her neck in a tightly contractive, full length costume doubly reinforced by belts. The final panel of that daily shows a group of men surrounding her . . .

Then there is the image of a group of scantily clad Hawaiian Aloha dancers falling across a horizontal Diana. Especially when one of them is quietly using a lei to bind her ankles . . .

Depictions such as this may be the one of the reasons that the strip lasted less than two years. Another may have been Dr. Marston’s choice in artists to bring his writing to life.

Over fifty when he received the call from Dr. Marston, H. G. Peters’ artistic style is marked by thick lines and, especially in the early days, he created panels crowded with action and characters. This made for overly-packed images inside smaller the smaller world of newsprint.

By the time Peters seems to have adapted to the needs of newsprint publication, the strip had been canceled by many of the papers it appeared in. Even with these concerns Peters clearly brought a highly individualistic style to the Wonder Woman book which. A style which also infused these dailies.

No matter what we read into the strip today, there is no arguing with the adventure found in each story. Dr. Marston knew how to build and sustain action. This strip flies with both adventure and conviction.

When these strips first saw print the country is at war. Wonder Woman is doing her best to combat saboteurs, spies, and the villains and thieves that populate these dailies.

Historically important as well as wildly entertaining, Wonder Woman the Complete Newspaper Strip (1944–1945) is the find of the year for everyone who loves adventure, history, women’s studies, comic books, and heroes.