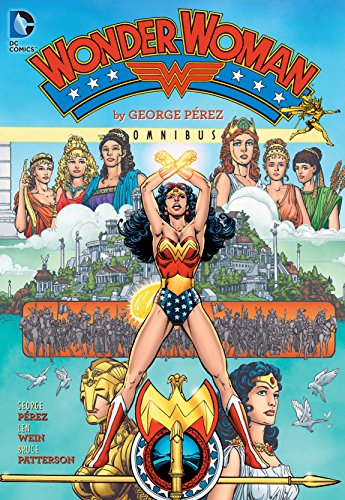 Today it is acceptable for a comic book hero to unravel, disappear, die, be reborn and on occasion, even be reincarnated in a different form, costume, or body. In 1986, the year that a new Wonder Woman debuted to both critical and public acclaim, this reinvention wasn’t the norm. Fans and the public had no idea what to expect.

What they got was one of the most brilliant and beautiful reinventions of a character in the history of the comic medium. Wonder Woman Omnibus by George Pérez gathers together the first 24 issues of the famed Amazon’s rebirth in a deluxe, easily affordable format.

Pérez not only created the art and layouts for the series, he was responsible for the plots and ideas that led to the character’s rebirth. Working closely with editor Karen Berger and from ideas laid out in an earlier proposal made by Greg Potter, Pérez took Wonder Woman straight into the world of ancient mythology. Then he dropped her into Boston.

As an iconic American hero born of the villainy of World War Two, the artist and writer understood that he was dealing with a character history that demanded respect.

The most important change he made was establishing a direct connection between her and the first story-telling arc of the modern Western world, Greco-Roman Mythology. Pérez moved the heroine in a direction that was modern, yet directly connected to 2,500 years’ worth of universal storytelling.

To her much-valued history he added Zeus, Hermes, Heracles, Poseidon, Demeter, Hestia, and even the ferryman who carries all souls across the river Styx. Most importantly, just the Greeks did thousands of years earlier, he imbues each of these gods, their offspring and other denizens of Olympus and Hades with rich, fully realized characterizations.

Driving the action from the evil side of the fence he give the reader Ares, son of Zeus, God of War, a wildly violent side that demands the enslavement of mankind. A second story finds Pan (or is it?) serving to goad Zeus into considering the Amazons as his harem.

In this new version he kept integral characters of her long-time storylines such as Steve Trevor, Etta Candy, and memorable villains such as The Cheetah. As to the famous bullet-proof bracelets, her Golden Lasso of Truth and even her very birth, Pérez places these as well as other aspects of her long-lived existence squarely in a deeply logical mythological origin.

The rebirth of the world’s most famous Amazon came as a result of DC restructuring their own universe. Fifty years after publishing their first issue, the comic publishing company found themselves loaded down with excessive and often contradictory continuity.

As it rebuilt a companywide narrative foundation, DC also took occasion to restructure their several of their own flagship characters. They killed off The Barry Allen version of Flash as well as Supergirl. Superman received an updated version of his origin by artist and writer John Byrne.

Most of the publicity at the time went to the rebirth of Superman as well as the company as a whole. This is one of the things that makes Wonder Woman Omnibus by George Pérez so prime for rediscovery. The complexity and depth that he instilled in the story of Wonder Woman still serves the character well today.

While many will be drawn in by the story he creates, his touch with a pencil is one most individualistic, organized and flowing in the history of comics. The artist knows and understands the medium of comics as only an expert can. In the manner of the great Jack Kirby, can create a single page that thunders with action and bursts straight out at the reader. On the other end of the spectrum he can build a single page will hold you breathless using twenty panels.

If one page stands as a testament to the originality of Pérez’ work it is page 19 of Wonder Woman #19 (February 1988). Diana is racing through the darkness of Hades trying to beat a flash of escaping demons to Doom’s Doorway.

As she fights to hold the door closed against a demonic onslaught, Pérez uses nineteen panels to crosscut around the world as both the world of the Amazons and the world of Man experiences the consequences of Wonder Woman’s battle.  While each world begins to splinter, the artist portrays the action in a series of panels that seem to tumble and fall apart, as if they were each a mirror to the action of the world around her.

When he shows us Mt. Olympus, home of the Gods, he builds a world of marble and stone that seems to move in four directions at once. As M. C. Escher once built castles, staircases and worlds that worked logically in opposite directions, Pérez builds a world of antiquity that defies logic and gravity yet still holds together.

This is exciting, adventure and action packed comic story telling with a sensibility that places the work on another level, one that stood out from the tone of the times in which these stories first appeared. The series Pérez created is free of the cynicism of other big books from roughly the same era such as Watchmen and Dark Knight Returns.

This isn’t to say that everything is perfect. Zeus is, as he always was, a horndog and Ares is one bad, bad God. While not on their level of cruelty and hubris, the newly created character of Mindy, the exploitative publicity agent who markets WW’s appearance in this world, is clearly reflective of the greed and self-absorption that grew in the eighties.

A deeply engaging storyline packed with action and emotion matched by art that influenced everything that followed it, Wonder Woman Omnibus by George Pérez is one of the best collections of 2015.