The Wonder Boy of Whistle Stop: A Novel 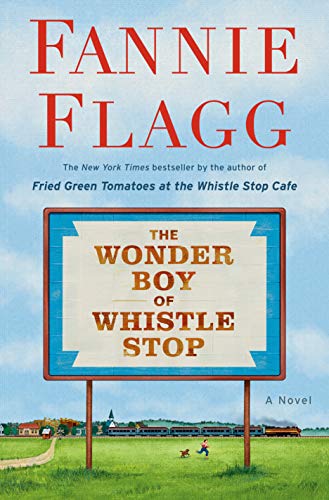 “The Wonder Boy of Whistle Stop is a captivating novel with characters and relationships to be savored, as well as ample servings of hope and inspiration.”

Some of our most celebrated authors have a writer’s voice nearly as distinct and identifiable as their fingerprints. Granted, there are genres of storytelling that share similar styles, and so a novel in the romance category may resemble others in that group, as could mystery or horror tomes echo their counterparts. But the odds are slim to none that a reader would ever mistake a work of Hemingway’s for one by Stephen King. Nor could a novel by Jane Austen likely be confused with one by Anne Rice.

In the pantheon of iconic authors, Fannie Flagg must be acknowledged as having a writer’s voice that is wonderfully recognizable as her own. Look up the word “folksy” in the dictionary, and the definition might include a reference to Flagg’s oeuvre. Her fans, of which there are legion, will be entirely beguiled by her latest novel, The Wonder Boy of Whistle Stop. It is charming, engaging, and highly satisfying.

Beloved figures from Flagg’s bestselling Fried Green Tomatoes at the Whistle Stop Cafe reappear in this new book, while others are included as a significant part of the memories of the returning characters. The years of this story span the 1930s to the “Present Day,” and the locations are national and occasionally international. Chapter headings offer the necessary information, and the chapters themselves are succinct and resonant.

Whistle Stop in Alabama is a town that has fallen to ruin. But it was once a thriving community, home to Dot Weems, who published the town’s newsletter, and Idgie Threadgoode and Ruth Jamison, who ran the Whistle Stop Cafe together.

Ruth left her abusive husband to return to Whistle Stop. Her son was legally adopted by the Threadgoode family. Ruth named him Buddy Jr. after Idgie’s deceased brother. It is Buddy (aka Bud) who is the wonder boy of the novel’s title. As Idgie’s sister-in-law Ninny explains, “he’s always a wonderin’ about somethin’ or another. Why do kittens purr, or why do rabbits have long ears?”

The novel details the exodus from Whistle Stop over the years. As railroads decline, so does the town. Idgie closes the cafe and moves to Florida. Dot and Wilbur Weems move to Fairhope, but Dot sends a Christmas newsletter each year to the old Whistle Stop gang, and her correspondence forms a part of the novel’s narrative.

Bud grows up to be a veterinarian and to serve in Germany with the Army’s K-9 corps. He marries Peggy and they have a baby girl. He has an artificial limb to replace the arm he lost as a child.

Bud’s mother Ruth does not live to see her granddaughter born, but Aunt Idgie couldn’t be more delighted when she gets the telegram announcing baby Ruthie’s birth. After they return to the states, Bud opens a veterinary clinic in Maryland, and takes his wife and daughter to visit Aunt Idgie in Florida.

Idgie and Ruthie take a trip together, just the two of them, to Disney World, and become the best of friends. The chapter recounting this visit is especially poignant, among so many touching stories in this heartwarming book. It ends on a summation of future changes that will be familiar to many, with other priorities and other people replacing what might be most important in life:

“They meant to come back. But Bud and Peggy got busy with the clinic, and time got away from them. . . . a few years later, Ruthie removed the photo of herself and Mickey Mouse that she had stuck on her vanity mirror, and replaced it with a picture of her current boy crush.”

Ruthie grows up to marry Brooks, a fine young man from an old money family. He has a snooty mother who values appearance over substance and who becomes a classic monster-in-law to Ruthie.

Along with Bud, Ruthie is a main character in this novel. Also vital to the plot is Evelyn Couch, a woman who experiences an inspiring transformation and changes the lives of more than one individual in The Wonder Boy of Whistle Stop. These three represent a memorable trio among many unforgettable characters.

After Bud’s wife dies, he moves into assisted living. And he wants to ride past Whistle Stop one more time. His journey to his old hometown is as rich and momentous as what happens when he gets to his destination. Flagg is an expert at keeping the interaction of her many characters flowing smoothly across locations and times. She plants clues, teases about the possibility of surprises, and brings the people in her novel together to share meaningful thoughts and experiences, all to wonderful and joyous effect.

The author is clearly having fun with these old friends of hers she has brought back to her readers; as just one example, there is a deliciously tense poker game to rival anything in a James Bond novel. Readers may find themselves talking back to this book, offering aloud cheers and tears alike.

What is especially comforting and cozy about The Wonder Boy of Whistle Stop is that the reader can feel safe with Flagg. Her characters may lose arms, they may drink too much and gamble too much, they may feel lost and alone, but they’ll be okay. Ultimately, they’ll be better than okay. There is danger in the larger world of Whistle Stop, but it never threatens to destroy anyone. There is heartache and loss, but they are survived.

The Wonder Boy of Whistle Stop is a captivating novel with characters and relationships to be savored, as well as ample servings of hope and inspiration. These are venerable storytelling qualities which surely are needed now more than ever. The Wonder Boy of Whistle Stop should garner an even wider fan-base for Flagg, a well-deserved outcome for an exceptional writer.