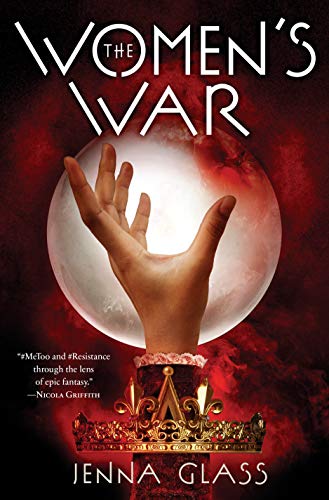 “a fascinating and entertaining read, and a welcome addition to the world of epic fantasy.”

A blend of the traditional Western European epic fantasy and the birth control revolution of the 1960s, The Women’s War takes the reader on a journey toward revolution.

The book begins as so many Western European epic fantasies do, with warring kingdoms and serfs caught between. The women are subjugated and frequently used as pawns for political marriages; however, the book does not mince what happens to those who fail to produce the correct gendered heir or who simply get too old. These women are sent to live at the Abbey of the Unwanted and wear red cloaks in a very Handmaid’s Tale fashion (the women who live in the Abbey are called “abigails”).

“This was called the Abbey of the Unwanted because it was filled with women no one wanted as wives. Women who were unchaste—or at least accused of being so. Women who were disobedient, who caused trouble, or who inconvenienced their husbands or fathers. Women like Aly’s mother, who had gotten in the way of her husband’s desire to marry another.”

The women of the abbey are the only women allowed to practice magic, although magic use is uniformly taught to men. The magic system is built around a trinary gender system, in which magical elements used to build magic spells can either be male, female, or neuter. Women can mostly see female elements and neuter, men can mostly see male elements and neuter. More adept people can see more into the other gender’s elements.

Women’s elements are thought to only be good for women’s spells, such as love potions and healing tonics. Men’s elements work best in war spells and things considered “more aggressive.” The elements come from “wells,” which are natural openings in the earth, frequently near water. The elements also occur in some foods and beverages, but despite this, there are definitively rare and common elements, hence making a decent backbone for the magic system.

The main character, Alys, is a former princess. Her mother was cast into the abbey when her king father decided he needed a new wife, and thus Alys and her brother became bastard children. Alys’ mother plots and executes the greatest kind of revenge and along with several other women creates a powerful spell that affects the entire world: women will only become pregnant when they actually want the child.

For a world based upon political marriages and desire for boy children, the spell is catastrophic. Miscarriages flood the land and men must suddenly start pretending to care about women—at least if they want to knock them up. There are numerous unforeseen consequences as well, such as the creation of a new well (“Women’s Well”) out in the desert that releases incredible numbers of rare elements, and a new “power” element that is given, unendingly, to women who have been raped.

With these new gifts and the smallest shred of power now over men, Alys and her brother stage a rebellion and turn Women’s Well from a place of exile to a place of inconceivable hope.

The world-as-character portion of this epic fantasy is strong and well built. The kingdoms and their various political structures and customs are well defined and make sense. Although men are thoroughly the villains in the book, there are still a number of three-dimensional male characters that give hope for the future the abigails fight for.

While there are a number of women POV characters, Alys and her daughter Jinnel, and Queen Ellin are the most dynamic. Alys is the primary magic user of the group, and it is through her that the reader learns of spells and the potential of Women’s Well. Jinnel is a spunky teenaged girl who repeatedly surprises her mother with her aptitude for political intrigue, and breathes some much-needed lightheartedness into the book.

Queen Ellin is dynamic and has the best plot arc of any of the characters. It is in her final triumph that The Women’s War first makes the turn from grimdark to hopeful, and readers will delight in every moment of Queen Ellin’s reign.

The only drawback to the book is the uniform coding of villains as fat or obese:

“His frown made his bottom lip all but disappear into the folds of fat that formed a cascade of chins, and his eyes filled with tears.”

While the man above, Yurvan, is only portrayed as distasteful (in that he utilizes the prostitution services of the abbey, which is staffed with unwilling women), all the villains at some point have their “larger than healthy” weight mentioned. Delnamal, the primary villain (Aly’s half brother), is repeatedly discussed in terms of wearing stays to hold in his gut:

“At first, Alys thought Delnamal had lost a little weight since she’d last seen him. The mail coat he wore—as if he were personally riding into battle—hung comfortably on his stout frame with no sign of straining. His cheeks, however, were as puffy as ever, and his second chin even more pronounced. When she realized he was standing unnaturally straight, she surmised that he was wearing stays under his mail, and it was all she could do not to laugh.”

Prince Waldmir is almost the exception to this trend, but despite being spoken about as a general villain throughout most of the book and described as “tall and thin and severe-looking,” Jinnel eventually finds him to be a fairly decent person which makes sense, of course, because he’s not fat.

Despite falling into the problematic trope of coding all villains as fat, The Women’s War delightfully manages to subvert a number of other problematic tropes inherent in Western European epic fantasy. The book’s focus on reproductive freedom and women’s worth, as well as the potential to explore non-binary genders with the comingling of visible elements (people who can see a good mix of female and male elements), makes it a fascinating and entertaining read, and a welcome addition to the world of epic fantasy.