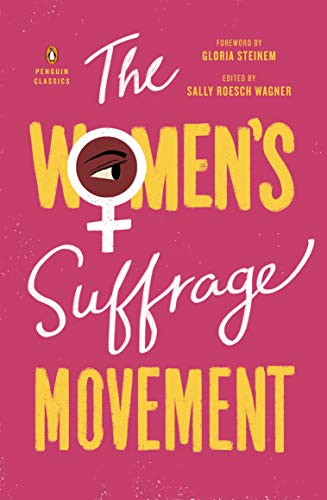 “The Women’s Suffrage Movement is for men as much as it is women. It’s for everyone, no matter what their sex, gender, ethnicity, or the color of their skin. As the 1960s civil rights activist Fannie Lou Hamer said, Nobody’s free until everybody’s free.”

The Women’s Suffrage Movement offers 80 documents that trace the long battle that lead to 19TH amendment to the U.S. Constitution. Next year, 2020, will mark the 100TH anniversary of the women’s right to vote. Not surprisingly, the documents in this comprehensive collection also cover a wide variety of topics: sex, marriage, the family, slavery, free love, men, and more.

They begin in the 1830s, gather speed after 1900, and culminate in 1920 when the 19th Amendment prohibited the states and the federal government from denying the right to vote to citizens of the United States on the basis of sex.

As this book shows, that right was a longtime coming. Many men fought against it tooth and nail; some women also fought against it. Black men won the right to vote before white women. The story of race and sex in America is a story of betrayal as well as brotherhood and sisterhood.

In hindsight, it seems strange that it took nearly 150 years for women’s suffrage to be guaranteed by the Constitution. After all, the U.S. was founded on the principle that “all men are created equal, that they are endowed by their Creator with certain unalienable Rights, that among these are Life, Liberty and the pursuit of Happiness. “

For some, the word “men” meant white men of means. For others it meant everyone. For Abigail Smith Adams, who became the First Lady when her husband was elected president, women were as deserving as men to receive the inalienable rights of life, liberty, and the pursuit of happiness.

In March 1776, while the founding fathers were meeting at the Continental Congress, Mrs. Adams wrote to Mr. Adams to say, “Do not put unlimited power into the hands of husbands. Remember, all men would be tyrants if they could.”

She added, with a sense of prescience, “If particular care and attention are not paid to the ladies, we are determined to foment a rebellion, and will not hold ourselves bound to obey any laws in which we have no voice of representation.”

For some unexplained reason, only a part of Abigail Adams’ letter is included in this anthology. A larger piece ought to have been included, and it ought to have appeared near the start of this collection, not after 50 pages.

Chronology does help. Adams’s letter was written in a period of revolution that touched the lives of men, women, slaves, slave owners, laborers, soldiers, and servants. Abigail was caught up in the revolutionary fervor.

In 1881, Matilda Joslyn Gage recognized, in her History of Woman Suffrage, that Mrs. Adams was “the first American woman who threatened rebellion unless the rights of her sex were secured.”

Sally Roesch Wagner, the editor of the volume—and a distinguished American historian—could have given Adams more credit than she receives in these pages.

The Women’s Suffrage Movement is divided into ten sections that are arranged chronologically. There are well-know figures, such as Susan B. Anthony, Victoria Woodhull, Ida B. Wells, and Elizabeth Cady Stanton, who is represented more than any other single person.

There are also works by lesser-known figures such as Anna Howard Shaw, Abby Price, and Susan Wattles, though they were well known during their own lifetimes.

Sally Roesch Wagner is at pains to show that women voted before the U.S. became a nation and that women organized for their rights before the Seneca Falls Convention of 1848 that is often regarded as the event that launched the movement.

Take this sentence: “The history of mankind is a history of repeated injuries and usurpations on the part of man toward woman, having in direct object the establishment of an absolute tyranny over her.”

That’s not a sentiment that any of the founding fathers would have expressed.

“The woman cultivated the arts of peace and the sentiments of kinship, and all there was of human love and home-life,” Stanton wrote in 1891 of Native Americans.

Former slave, abolitionist and author Frederick Douglass—the only male to attend the Seneca Falls Convention—said he would not accept the right to vote unless women had the same right.

Douglass is one of the few males cast in an admirable light in The Women’s Suffrage Movement.

The 1875 trial resulted in a hung jury, but not before the whole nation saw his reputation tarnished.

Woodhull explained her views about love and sex in an 1871 speech titled “And the Truth Shall Make You Free,” which is included in this volume.

“Yes, I am a Free Lover,” she wrote. “I have an inalienable, constitutional and natural right to love whom I may, love as long or as short a period as I can.”

Woodhull sounds like a 21st century woman. Undoubtedly, she would have joined the #MeToo movement.

In her Foreword, feminist and activist, Gloria Steinem, writes that all through the 19th century, abolitionists and suffragettes “were not sure that slavery would be abolished, or that universal adult suffrage would succeed.”

Suffragettes formed the backbone of the anti-slavery movement, though many male abolitionists were against the vote for women. One hundred years later, men who called for civil rights, black power and an end to the War in Vietnam also opposed feminism.

Given the fact that American citizens have been increasingly disenfranchised over the last decade or so, and that districts have been gerrymandered to favor one political party over the other, The Women’s Suffrage Movement tells a timely tale about the march of democracy and the efforts to abort it nearly every step of the way.

The Afterword by Wagner that’s titled “Now That Our Journey Is at an End” seems to be wrongheaded, though Wagner encourages activism today, which suggests that the journey isn’t at an end.

“A dozen can start a movement, a hundred can swing an election, a thousand can change the course of history,” Wagner writes. That’s a nice sentiment, though it’s not true.

Dr. Martin Luther King, Jr. wrote that, “No great victories are won in a war for the transformation of a whole people without total participation.”

King’s words are as alive today as when he wrote them in 1967 after the passage of the 1965 Voting Rights Act and in the midst of a “counterrevolution,” as King called it, that aimed to roll back the progress that had been made because of the civil rights movement.

In her 1776 letter to her husband, Mrs. Adams wrote that, “Men of Sense in all Ages abhor those customs which treat us only as the vassals of your Sex.” Men of sense still abhor the customs that treat women as inferior to men.

The Women’s Suffrage Movement is for men as much as it is women. It’s for everyone, no matter what their sex, gender, ethnicity, or the color of their skin. As the 1960s civil rights activist Fannie Lou Hamer said, Nobody’s free until everybody’s free.

Let’s hope that in the run-up to the centenary of the women’s right to vote, Americans will turn to this book and learn the history that has often been left out of the history books.