Women from the Ankle Down: The Story of Shoes and How They Define Us 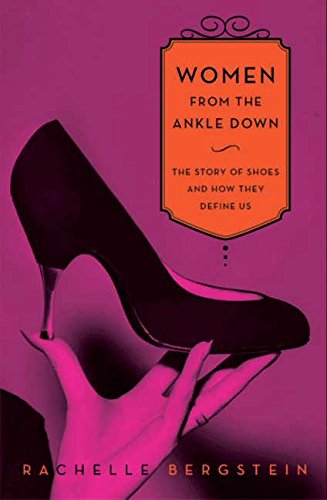 Author Rachel Bergstein has organized the history of women’s (and men’s) shoes from heel to toe into not only a readable history, but also an enjoyable one.

She presents her story—for that is what this is—in chronological order starting from 1900 through the present, missing nary an epoch or a style.

In each chapter, Ms. Bergstein provides the reader with biographical history of people and eras important to the evolution of the shoe.

From Salvatore Ferragamo in Bonito, Italy, who brought his eye for beautiful and comfortable shoes to the Hollywood Hills; to Christian Louboutin and his “sky-high platform pumps” coveted by the likes of Naomi Campbell, Lady Gaga, Angelina Jolie, and the stars of “Sex and the City,” Ms. Bergstein takes us on a fantasy excursion.

The author starts us on this journey with a biography of Ferragamo and how his love for women’s feet brings him to America where Hollywood starlets, movie producers, and designers alike adore his styles. At the same time World War I causes a shortage of supplies, as well as change to everything related to style. Soon flappers and the Jazz Age send the world into a style frenzy.

Ms. Bergstein delves into the Great Depression and comes out the other end with Hollywood’s adaptation of the Wizard of Oz, leading to America’s love affair with a pair of ruby red slippers—just the beginning film defining the latest in women’s footwear.

But with the advent of World War II, shoe styles head in yet another direction. As men go off to war, the role of women in the workforce brings attention to a heavy-duty shoe appropriate for factory work, and with it, the image of Rosie the Riveter catches America’s attention.

Despite the lack of chic in the ubiquitous workboot, the glamour of the female leg remains on the minds of the men who fight in far off lands as the Varga Girls, wearing high-heeled shoes and not much more, add an inherently sexy patina to that footwear.

It isn’t only the high-heeled shoe that begins its rise during wartime; the high-heeled boot, as worn by Wonder Woman, brought a whole new definition to women’s legs and feet. Once boots came on the scene, they never leave; boots are always in fashion in one form or another.

Hollywood continues to take the lead in developing and promoting the femme fatale during the late 1940s, as exemplified by Barbara Stanwyck in her role as Phyllis Dietrichson in Double Indemnity. Stanwyck’s character is truly a woman who, given half a chance, would eat off her husband’s face, then saunter casually down the stairs in her white pumps, wearing an anklet drawing attention to . . . her legs! At this time during Hollywood’s heyday, the likes of Lana Turner and Marilyn Monroe bring femme fatale roles to everyone’s attention as shoes in the movies of this era invite men to come hither, disaster be damned.

In Women from the Ankle Down, discussion of the stiletto—a tiltingly high, narrow shoe—even covers China and the binding of women’s feet. The height of the heel diminishes only slightly when Marilyn Monroe steps into the role of “The Girl” in The Seven Year Itch in 1954, wearing a pair of thin, slingback sandals, immediately designating them as the “quintessential CFM shoes.” (Note to reader—if you don’t know what CFMs are, you will have to read the book to find out!).

Then in the 1950s, flats become popular with younger women due in no small part to movies such as Funny Face starring Audrey Hepburn. The advent of flats provide an opposing concept for shoe styles from the stiletto, introducing the contrast between intellectual and restrained versus sexy and flirtatious.

As the world moves into the politically touchy 1960s, icons such as Jacqueline Kennedy bring a new look to fashion and during these volatile years, young people begin to question their parents’ styles—no longer just accepting what is passed down to them.

And then along come The Beatles with a gaggle of British musicians and British designers who bring a whole new look to America and the world. Dressing gets more innovative and includes unusual pairings of clothing with shoes from sneakers to oxfords to Vans. During this time, the attention to legs and feet come to include men as well, and the Cuban heel finds its way into the limelight at the same time as John and Paul popularize the Chelsea boot.

Ms. Bergstein revisits how Nancy Sinatra brings boots once again out of the closet, as does the remake of Wonder Woman. Boots “became an indication of a female character’s physical and moral strength.” Jane Fonda, in her role as Barbarella, proves alluring—a combination of male strength and female compassion—as she travels through this fantasy in thigh-high boots and a bikini.

In the 1970s, the desired shoe style morphes into the platform shoe worn by men and women; concomitantly, androgyny becomes a way of life with names like Marc Bolan and David Bowie (aka Ziggy Stardust) heading the list.

By the late 1970s, early 1980s, designers such as Manolo Blahnik, Charles Jourdan, and Walter Steiger begin dressing businesswomen who are just starting to push on corporate America’s glass ceiling. At the same time, author John Molloy reaches out to businesswomen through his book, Dress for Success, creating a look for go-getters based on how they express their particular style.

As women reach and begin to punch through that glass ceiling, style grows into an important factor in challenging men for positions in upper management—and classic suits and high heels send a clear message: I am woman, hear me roar.

Not until a transit strike in New York City would any up-and-coming female executive ever think of adding sports shoes to her business ensemble. That strike makes a new place for the walking shoe, and with it, fitness gyms become a second habitat for women.

In the late 1980s early 1990s, the popularity of Vans is challenged by Reebok, Nike, and other designer fitness footwear, but survives the storm when grunge hits the scene. During this time, Chuck Taylors and Doc Martens take a foothold (no pun intended) on young feet for men and women.

As the book opens into the new millennium, the TV show “Sex and the City” draws attention back to high-end footwear.

As Ms. Bergstein ends (or perhaps “delays” would be a better word) this amazing journey of the shoe, she returns to the concept of the search for the ruby slippers with a discussion of a new version of the slipper as designed by several celebrated designers for a 2008 display at Saks Fifth Avenue. Blahnik, Choo, Randall, and Louboutin—all know that celebrity and celebrity memorabilia sell, and they benefit from this at every chance, designing shoes that “are symbolic of the wearer’s hope and dreams. Be it wealth, fame, career success, or a happy marriage. . . .”

Informative, interesting, and just plain fun, Women from the Ankle Down: The Story of Shoes and How They Define Us by Rachel Bergstein should stand tall on bookshelves of every woman and man alike.