The Woman's Hour: The Last Furious Fight to Win the Vote 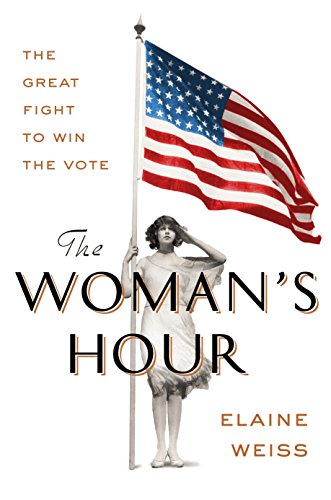 Some of the history of the United States is known to many, yet the story behind the events and circumstances that make up that history not always necessarily so much. Consequently, it is desirable to have the opportunity to acquaint oneself with that story in the interest of self-education, information, and enlightenment.

In this case, it is a chance to peruse the events that culminated in the final ratification necessary to add the Nineteenth Amendment to the Constitution, that which gave women the right to vote. More specifically, it is the story of the fight in Tennessee to put the amendment over the top following its ratification by 35 previous state legislatures.

What may be interesting, and unrealized to many, is the fact that this was not just an “us vs. them” or men vs. women attempt on the part of male anti-suffragists to prevent women from attaining full citizenship status and civil rights. It was also a matter of women having their say in government representation in terms of issues that affected women such as equal pay for the same work, divorce and child custody, property, and contraception and other health concerns.

This was a multifaceted fight that found not only male against female and women opposing women on the issue but also involved multiple economic, social, and other machinations of various business and political interests as well as the ubiquitous national issue of the time: the race question. With ratification, it was understood that the amendment would also include suffrage for black women who would come under its purview as well.

Inasmuch as women were seen as being “dry”—supporters of Prohibition—the liquor interests were as opposed as the railroad and other corporate entities that saw women suffrage as antithetical to their own business objectives on pay, labor policy, and so forth.

Considering the fact that it was Tennessee, a Southern state, that was the focus of the fight, the effect on the honor and virtue of white women was considered along with the perceived disruption of home and domestic life and the idea that women had no business being involved in the dirt and “depravity” of politics.

Indeed, there were other considerations for opposing ratification. On the one hand, both political parties and their presidential candidates (1920 was an election year) wished to claim credit for this socially progressive concept yet were not always so forcefully enthusiastic given how “unpredictable” women might be when empowered with the franchise.

By the same token, some states were reluctant to vote for ratification and thereby force the ramifications on states that had already rejected the amendment. Additionally, some Tennessee legislators were concerned about violating their oaths of office relative to the state’s constitution, a matter shot down by United States Supreme Court decision.

In any event, the story here is told in all its ugliness, from alleged bribery and other legislative chicanery, to the dogged determination of the various women’s organizations to see the battle won, for weal or woe. The cast of characters is considerable on both sides and one almost needs a program to keep track of the players, although that is not intended as criticism.

The final result is known now, but the climax at the time was as much of a nail-biter as one could conceive. It’s pretty much of a page-turner when the waffling and fence sitting as to legislators’ pledges of support or opposition, their sometime reluctance to address the issue and the pressure, stress, and strain on them is considered.

Besides the historical significance of the story itself, a real highlight is the inclusion of two sections of contemporary photographs of relevant subjects, especially of those individuals who prominently figured in the text yet may be largely unknown or unfamiliar to most.

As the author is not a professional historian, there are no traditional citations. The notes herein tend to reference quotations and other important points with their source then being provided. Otherwise, the bibliography is extensive, particularly from various personal and governmental collections within the state of Tennessee.

It was hoped that the publication of this volume would coincide with the election of the country’s first female president. Although that did not happen, this is still an extremely relevant, interesting, and important contribution to the historical literature in light of the cultural upheaval extant in contemporary American society.