The Woman in the Woods: A Thriller (Charlie Parker) 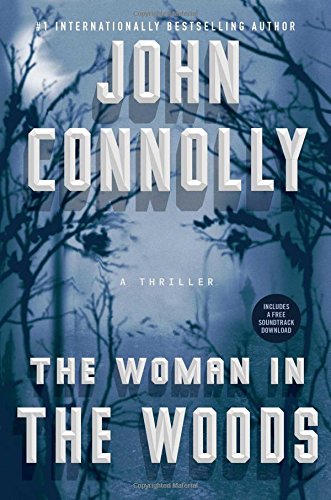 For fans of John Connolly’s Charlie Parker series of paranormal mysteries, his most recent book, The Woman in the Woods, will probably meet their expectations. For those who are first time readers of the series, perhaps not so much.

Connolly introduces a large number of new characters as well as some repeats, specifically Louis and Angel, a gay interracial couple who have on occasion assisted Charlie in his private detective activities. In this story, Angel has undergone a serious operation, and Louis refuses to believe that this indicates the end of life.

Connolly has developed two strong antagonists in Quayle and Pallida Mors, the type the reader really learns to hate but can’t stop reading about them.

It takes 56 pages before the woman in the woods is discovered, although Connolly drops small crumbs of clues indicating death is soon to make its appearance. In those 56 pages, the story arc begins its slow rise to the surface and the basic story unfolds. Abused women escape their tormentors and make their way through the modern day equivalent of an underground railroad.

Dobey, owner of Dobey’s Diner in Cadillac, Indiana, is part of this trek, and one woman whom he helped becomes his undoing. Dobey is also a buyer and seller of rare books, and when a man named Quayle appears at the diner, it is obvious he is interested in one rare book and one escaped woman.

Along with his female assistant, Pallida Mors, a woman who smells of death, they deliver the same to almost everyone they come in contact with. Thus it is with Dobey when he is unable to provide Quayle with the answer to a question, Where is Karis Lamb and the book she has?

And thus the search continues as Quayle and Mors follow the path that leads them to Maine and Charlie Parker. In their search, they leave behind dead bodies—anyone they have encountered during their search who may be able to identify them is not left to make that identification.

In the meantime—and there are a lot of meantimes in this story—a woman’s body is found buried in a shallow grave in the Maine woods. There is no identification, but it is determined that she died shortly after giving birth. Her death was not murder, but the question of the child’s whereabouts is disturbing. Charlie Parker is hired by his lawyer and friend, Moxie Castin, to pursue this woman’s identity, for no reason other than it is right to put the dead to rest.

A side story rises when Louis sets fire to the pickup truck owned by Billy Ocean (Stonehurst), a local white supremacist, simply because Louis doesn’t like the message Billy sends. The connection between this act and Quayle’s search becomes obvious later in the story.

As Charlie takes his investigation to another level, a number of paranormal issues come into play. Holly Weaver, divorced and single mother, protects her son, Daniel, with a vengeance—especially since the discovery of the body in the woods. Daniel, hears a voice from his toy telephone—his mother’s voice, and no, it is not Holly. It is Karis Lamb, calling from the grave.

The crux of the story is not just that Quayle wants to find Daniel, but more importantly he is searching for an atlas, a roadmap to world destruction, and he believes that Karis absconded with the book and that Daniel now has it. Daniel’s life and that of his mother and grandfather, Owen, mean nothing to Quayle, although he is willing to let them live if he obtains the book.

At the same time, Charlie’s dead daughter, Jennifer, makes contact with his live daughter, Samantha, and Jennifer becomes involved in observing Karis, and Daniel. The reason for this is not clearly explained.

As the story progresses, another group known as The Backers wish to see Charlie Parker dead; it is not clear why, except that they are associated with Quayle, who also wants to see Charlie dead. Again, the reason for their appearance, other than to add more tension to the story, is confusing. It is possible that the Backers are a carryover from previous Charlie Parker stories—that being given, the reader new to this series will be befuddled.

During his search, Charlie discovers the deaths of several people in Cadillac, Indiana, and he makes the connection to the woman in the woods. He meets Leila Patton, who had worked for Dobey, and convinces her to reveal to him her knowledge of Karis Lamb. During their conversation, she gives him a book that Karis left with her (another paranormal issue); it is a living book that cannot be destroyed. Charlie takes the book back to Maine with him, where he asks Bob Johnston, a rare book expert to look at it, and Johnston discovers the book’s mysteries. But he can’t explain them.

As the story winds down, the action ramps up. Charlie realizes that Holly and Daniel, and Holly’s father, Owen, are in trouble, and he has Holly and Daniel placed in a safe house. Owen, however, has disappeared, into the hands of Quayle and Mors. It does not take Quayle long to learn that Charlie has the book, and Quayle has Owen, so a tradeoff is arranged.

Although there are a number of loose ends that are not tied up at the end of the story, Connolly does leave the reader with the thought that there is still more to this story because of these loose ends.

The premise is interesting, the story feels long-winded at times, and it is not until the second half of the book that the story starts to move quickly. The numbers of characters that Connolly introduces throughout are, at times, difficult to stay in touch with, but he manages, for the most part, to bring the story home.