The Woman in the Veil: A Victorian Mystery 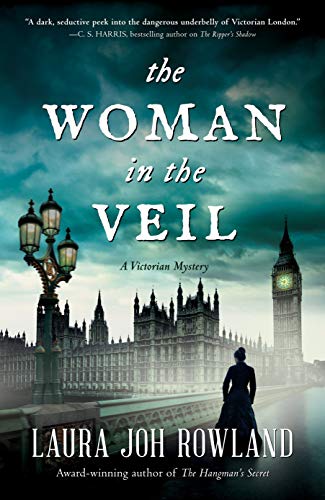 Sarah Bain and her two friends, Lord Hugh Staunton and Mick O’Reilly, are called to a murder scene. An unidentified, nude woman with a slashed face lies beside the river Thames, just the kind of sensational crime her editor, Sir Gerald, loves.

Sarah prepares to take the final photograph of the woman’s face. “Sir Gerald—and the public—will want to see the worst that the killer has done.”

As Sarah brushes the woman’s hair away from her face, she feels a warmth that shouldn’t be there, and hears a “soft noise like liquid sucked through a whistle. I see mucous bubbles at her mouth.”

The woman, the supposed murder victim, is alive.

Sarah, Sir Hugh, and Mick follow the ambulance to the hospital where the victim is washed and the slashes on her face sewn up. “. . . she looks like the rag dolls that little girls in Whitechapel carry about, her face a patchwork crisscrossed with stitches.”

Whoever attacked the woman wanted to erase her identity, as well as kill her. As Sarah sits with the unconscious woman, she vows to find whoever is guilty and make them pay. As soon as the victim awakes from her coma, Sarah will learn the attacker’s name or at least obtain a description.

Sarah’s plan is stymied by the unexpected as the victim awakes with total amnesia. She not only doesn’t remember the attack, she doesn’t remember her own name or of having a past life at all.

Dubbed “Sleeping Beauty” by Sir Gerald, a name copied by the rest of the press, the woman becomes a media sensation. After Sarah and her two friends solved a sensational murder case, which resulted in very healthy sales of the Daily World, Sir Gerald is practically salivating at the thought of the sales if the trio solves the Sleeping Beauty case.

Sarah very much wants the same thing, but is dubious about Scotland Yard’s reaction to her interfering with an investigation. Sir Gerald, his eye ever on a profit, reassures the three friends that he has smoothed their way to become involved.

“I’ve twisted some arms in high places and worked out a deal. . . . The Daily World’s stories will bring in tips from the public and help the police solve cases . . . I’ll throw in a little praise for the boys in blue.”

Sarah knows her fiancé, Sergeant Barret, will not object to Sir Gerald’s deal, but she suspects the rest of Scotland Yard will not be pleased at all.

A subplot concerns Sir Gerald’s son, Tristan, and his relationship with Lord Hugh. The editor disapproves of the relationship, but doesn’t want to alienate his son with heavy handed threats. Lord Hugh has already has been publically exposed as a homosexual and disowned by his family, so he has nothing further to lose. As a former priest, any scandal surrounding Tristan will not only destroy him, but also Sir Gerald and the rest of the family.

But something is wrong. Tristan leaves Sir Gerald’s estate at night and doesn’t return until morning. He doesn’t meet Lord Hugh, has, in fact, stood up Lord Hugh several times. Sir Gerald believes Tristan is in trouble, while Lord Hugh wonders if he has found another lover.

Although Sarah sympathizes, her mind is more on Sleeping Beauty’s identity than on Lord Hugh’s affair with Tristan.

The Telegraph, the Daily World’s competitor runs a story about the trio which reveals their unsavory histories. The story reveals Lord Hugh’s homosexuality; Mick’s early life as “a dirty little ragamuffin . . .” supporting himself by acts of petty larceny; and Sarah as the daughter of a suspected murderer who is now a fugitive.

Although Sarah is not pleased to have the trio’s dirty laundry exposed in print, it doesn’t deter her from the need to identify Sleeping Beauty and find her assailant. Nor does the story shake her intentions to one day find her father.

The newspaper stories results in numerous people claiming to know Sleeping Beauty, but three different claims seem to have validity: a famous but unpleasant artist who says she is his wife; a woman and her two daughters, co-owners of a nursing home, who claim she is a missing stepdaughter; and a little girl who believes she is her mother.

Which claimant is telling the truth, and which one might be the murderer who tried to kill Sleeping Beauty?

While The Woman in the Veil holds one’s attention, the two subplots distract from the central plot: Who is Sleeping Beauty and who wants her dead and why?

Rowland’s Victorian mysteries featuring Sarah Bain, Lord Hugh, and Mick are interesting, but don’t quite match the intensity of her Sano Ichiro stories. Which series one chooses to read depends on whether one is in the mood for the exotic setting of 17th century Japan or 19th century London.