The Woman at the Front 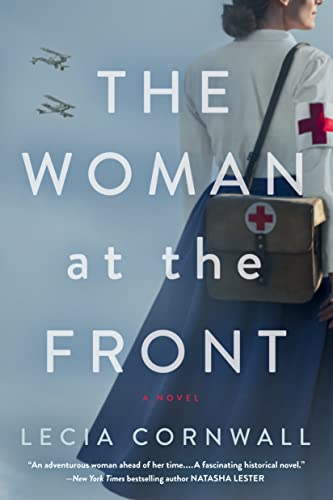 “The book highlights the bravery, courage, and determination of a female doctor ahead of her time, saving broken bones as well as broken souls. Every woman's heroine. Compulsively readable.”

March 1918. The last year of WWI. A female doctor is sent to France to bring home a wounded pilot. The male doctors are shocked. Bombs explode, hitting the outpost. She's only doctor left to treat the wounded soldiers. Her skills as a doctor have never before been tested so acutely. Will she pass the test? Thus begins the story of Dr. Eleanor Atherton.

Eleanor Atherton always wanted to be a doctor. Her father, the local doctor of her town, Thorndale, used to show pictures of the body to Eleanor and her twin brother, Edward.  Edward and his friend, Louis, the son of a countess, play together outside but bully Eleanor and tease her. She, however, has a crush on Louis.

Her father encourages Edward to write the entrance exam for medical school. His daughter also wants to go to medical school. However, Eleanor's mother, Grace, tells her that a woman's place is in the home. She's expected to marry a local doctor and have children. She helps her father in his clinic, changing bandages and other mundane jobs. Eleanor studies hard for the entrance exam but doesn't see Edward do the same.

The day of the exam arrives. Eleanor is so nervous that she freezes when she looks at the questions. Edward, however, approaches the exam with confidence. Eleanor is sure she's failed. When the letters arrive from the medical school, their father opens them and summons both of his children to his office. Eleanor is shocked to learn that she passed the exam but Edward failed. Their father is so angry that he berates Edward and discourages Eleanor from attending. "For the first time in her life, she heard John Atherton yelling. Grace had been stunned . . . burst into tears."

Eleanor is determined to attend medical school despite her father's objections and is sure that she can pass the exams and become a good doctor. Her father scorns her and is sure that she'll fail. Her mother is also disappointed and insists that a woman's place is in the home.

Eleanor has to face the smirks and scornful insults from her male classmates and teachers. But she persists and receives her medical degree. Her parents ignore the good news, and her father doesn't speak to her. However, in her determination to help out the war effort as a doctor, she approaches a colonel in the war office in England with her request. He laughs at her and tells her she would not be able to stomach wounded soldiers. He tells her, "Young woman, my advice to you is to go home, sit down, and take up something more useful, such as knitting. If I'd known that E. Atherton was female, I would not have taken this appointment at all."

Disappointed, Eleanor leaves. On her way home she hears a cry for help. Charlie Nevins, whom she knows well, brings her over to a truck where his father has a bleeding wound in his leg. She presses on the wound to stop the bleeding. She convinces Charlie to take him to another hospital because Dr. Atherton is away.

At the hospital, the surgeon refuses to operate on common folk. But the countess, who owns this hospital, orders him to do so.  Later in the week, the countess calls Eleanor into her home and tells her that she wants to send her to France to a clearing station to bring her wounded son, Louis, home. Eleanor jumps at the chance to finally be the doctor that she always strived for. However, when she tells her father this news, he tells her that he expected her to fail. "I have never wished or expected you to practice as a doctor in your right. In my opinion, no woman is fit for that." He picked up his pen. "Close the door on your way out."

She travels on trains and in trucks for three days without food or water. Her plain skirt and blouse are creased and her locks of hair hang through her hat. She becomes frightened when a group of young soldiers mock her, try to rape her and grab her medical bag. She tries to retrieve it but they continue to play with it until a commander orders them to stop. The man who held her hair and yanked it says, "You a doctor? Are they sending bloody women to cut us open?"

On the last train she meets a stretcher bearer named Colonel Fraser McLeod. She sees wounded soldiers on stretchers being carried to clearing stations or hospitals. Fraser worries that such a "wee lass" would faint at the sight of blood. However, he takes her to the clearing station where Louis is being looked after. She walks in and all the nurses and doctors look at her with hostile eyes. When she announces that she's a doctor assigned to Louis Chastaine, they look at her with disbelief and tell her to go home. "I understand you think you're a doctor . . . but why are you here?” She produces a letter from the countess. They have no choice. But they continue to look at her suspiciously and tell her that she's only allowed to tend to Louis and no other wounded soldier.

She meets Louis who can't believe that she's actually become a practicing doctor. Her twin brother is a lieutenant at headquarters in Paris. She hasn't heard from him since he left for Cambridge after she graduated. Louis broke his leg in several places when his plane was shot at, caught fire but he made a spectacular landing with a broken leg. Soldiers pulled him from the fire and saved his life. He's a hero. He looks at Eleanor with eyes that make her blush. He's become a spoiled brat who whines that he's bored and in pain and wants to walk. He tries to flirt with her. "It's you I'm interested in, El."

Dr. Bellford, the head of this clearing station tells Eleanor that Louis is getting the best medical care and doesn't need another civilian doctor, especially a woman. How will she be able to undress a man to look at his wounds? These men wouldn't let any woman touch them. Matron Connolly, the head nurse, is strict and always looks stern. She's especially hostile to Eleanor and lets her know. She doesn't want some outside woman doctor to give her instructions. Eleanor tries to ignore her and visits Louis every day to check his bandages and cuts and make conversation. She tells him that his mother sent her here to bring him home when he's ready to travel. He sneers and berates his mother. She wants him home to take his responsibilities as a viscount which Louis abhors at the thought. "She had to be stronger, braver, better than her male classmates, fully armored."

Dr. Blair is the only one who admires her skills and falls in love with her. But every time she sees a stretcher bearer bringing in the wounded and dying, she hopes it's Fraser McCloud. One day, as she's tending to Louis, she notices Captain Findlay in the next bed gasping for air. She runs over, sees that his lung is collapsing, opens his shirt and pokes a needle into his bare chest. She also loosens the bandages. He profusely thanks her. "Are you one of my father's angels?" However, Matron Connolly berates her for touching another patient. "You are going to kill him!" Louis looks at Eleanor with disbelief and jealousy. He continues to whine that he wants to get out of this hospital. Eleanor tends to his pouting and whining and tells him that he's still not ready to fly.

They hear gunshots coming closer and closer to the clearing station. Fraser and other stretcher bearers arrive carrying hundreds of wounded and dying soldiers. He convinces Eleanor to help him with triage and teaches her how to perform this task. Eleanor is frightened but learns fast and shows that she's up to the task. Even Fraser worries that she would faint in seeing all that blood and burnt flesh from gas. But she tends to the soldiers with compassion and is quickly able to determine whether a patient needs a hospital, the clearing station, or whether it's too late to save him.

Dr Bellford, head doctor, is furious. But Dr. David Blair is impressed and asks Eleanor to eat supper with him. She has a pleasant time but is in love with Fraser McCloud. She continues to tend to her soldiers very closely with Sergeant McCloud. He realizes that he's falling in love with that "wee lass," who talks to him about Thorndale and gets him to talk about the grass and hills of Scotland. They decide to clandestinely sleep together and Eleanor has the most uplifting feeling of pleasure that she's ever experienced in her whole life. "Show me all the poetry, music and magic you can, Fraser. Teach me how to dance . . . and for a time she forgot the war and Louis and the whole rest of the world, and only the two of them mattered."

All seems quiet until they hear bombs exploding all around them. Fraser leaves for the front. Eleanor wonders if she'll ever see him again. The chief medical officer is killed, and Dr. Blair is needed at the front lines. Dr. Bellford and Eleanor are the only two doctors left. They both try to mend the wounds and give hope, although Bellford still remains skeptical of Eleanor's skills as a doctor.

A telegram arrives for Dr. Blair. He's urgently needed at another clearing station. His younger brother Patrick is badly wounded. Eleanor puts on a uniform, cap, and boots and makes her way to the front lines to help out. She looks in vain for Fraser, but he's not one of the stretcher bearers. She fears he's wounded or dead. Meanwhile, she tends to the soldiers while guns are blaring and almost hits the outpost.

There are Germans hiding behind the outpost ready to unleash a bomb. Suddenly she sees a reconnaissance plane flying very low. It's Louis. He releases a bomb and destroys the German outpost, saving her life. She's shocked. She finds out that Edward signed an order to take him to Paris where his friends live it up with wine, women, and caviar. But Louis is bored and wants to fly again. He offers to marry Fanny and assume the duties of a viscount if she allows him to fly once again. Eleanor worries that the countess will be angry and will not take her on as a doctor at her hospital.

When Dr. Bellford is wounded, Eleanor operates on his abdomen and saves his life. Even Matron Connolly has a different attitude toward Dr. Atherton. Eleanor's heart still pines over Fraser whom she hasn't seen or heard from. Dr. Bellford wants to send her home to England, but she refuses to go.

Eleanor is elated. She saved lives. She's the doctor she always wanted to be. Until one day Edward tells her a secret that makes her life come crashing down. Will she be able to keep this secret from her colleagues? Will she find Fraser McCloud?

The book highlights the bravery, courage, and determination of a female doctor ahead of her time, saving broken bones as well as broken souls. Every woman's heroine. Compulsively readable.