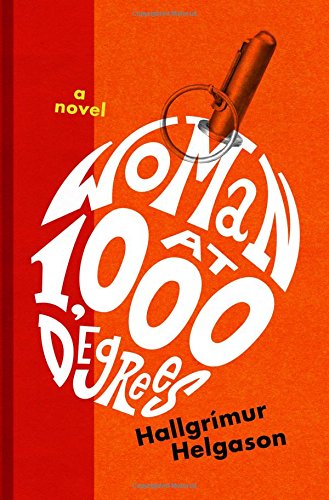 "required reading for those who want sour along with the sweet of life."

A novel of family, love, loss, but most of all, of survival, Woman at 1,000 Degrees uses gritty language and black, black humor to create an unforgettable character in Herra Bjornsson, who gleefully skewers not only her native Iceland, but rips the masks of pretension from most of the rest of the world.

“I live here alone in a garage, together with a laptop computer and an old hand grenade. It’s pretty cozy.”

Eighty-year-old Herra Bjornsson lies alone in a hospital bed that shares space with a toilet, a tiny kitchen area, and a bedside table. She is dying, but doesn’t fear it; in fact, after hearing she has only a few weeks to live she calls the local crematorium to book her own cremation.

“The more I think about it, the more I like the idea of those thousand degrees. The flames of purgatory could hardly be any hotter and ought to remove some of the blemishes on my wretched soul, which I myself have been unable to erase.”

As humorous as Herra’s conversation with the crematorium’s agent is, the reality is the polar opposite: the old woman is afraid her sons will not attend her funeral. They have seldom visited her during her eight years dying in the garage; there is little reason to expect them to visit her after death. And she definitely doesn’t want to spend another “lonely Christmas” in the garage.

Herra finds humor in her own dying by describing it in terms of WWII. “World War II therefore still rages in my body; it’s an eternal struggle. The Germans marched into my liver and kidneys just before Christmas last year with their ruthless malignance and still occupy the area, although the Allies pushed them into retreat from the stomach and colon the previous spring.”

One must admire a person able to see humor in her terminal condition, a humor absolutely necessary to a survivor, which Herra is. “I’ve nothing left except a few weeks of life, two cartons of Pall Malls, a laptop, and a hand grenade, and I’ve never been better.”

On the other hand, she is honest with herself as to her real situation. “. . . the discomfort of the unburied, they used to call it in the old days.” In reality, Herra is a lonely old woman, estranged from her children, dying alone except for visits from Home Care nurses. Herra sees the humor in her coming death, and as is not a greedy woman, accepts what life has dealt her rather than whining for what she does not have.

As she lies dying, Herra makes what amounts to a death bed confession, recounting her life story in fits and starts, jumping from past to present and all the years in between. It’s a chaotic narrative style, but mirrors Herra’s life, which has been sad and happy, frightening and reassuring, and plays out against the background of the Great Depression, Hitler’s rise, the birth of Iceland’s independence and the country’s subsequent economic collapse, the Cold War, and the Beatles.

Born in 1929 as a result of a one-night stand between her father, eldest son of the first President of Iceland after the country achieves independence in 1944, and her mother, Massa, a working-class woman from one of Iceland’s numerous islands, Herra lives alone with her mother for the first seven years of her life.

Her father, Hans Henrik Bjornsson, learning of the pregnancy, informs his own father. The seven second delay of speech by her grandfather is interpreted by her father as disapproval—which it is not. That seven second delay allows Herra in her grown-up life to deliver a hilarious discourse on Icelandic Silence and its relationship to the unchanging Icelandic language. That scene alone is worth the price of the book.

After seven years alone with Massa, Hans Henrik appears, apologizing for his absence, and takes his wife and daughter to live with his own parents. It is the first of many dislocations, both physical and emotional, that Herra endures. The next dislocation is emotional. Her father chooses to fight for Hitler and Germany during WWII much to her mother’s disapproval. In her later years Herra sees her father as suffering “Leader-induced paralysis.”

Much of the book recounts Herra’s life during WWII. From Copenhagen and life with her father’s mother, then briefly in Germany with her father until he sends her to the Frisian Islands after the Allies begin bombing Germany. An incident involving Herra protecting the identity of a downed English pilot leads to a brutal interrogation and humiliation by the Germans.

Under threat of death the child Herra gives up her knowledge of the Englishman and his rescuers. All are shot, and Herra condemns herself. “I had become a war criminal.”

When her father leaves Herra at the Hamburg train station to wait for her mother’s train, he gives her a hand grenade, the very one she still has as she waits to die. Her father leaves for the eastern front, and her mother never arrives on the train and is likely dead. Now Herra, not quite 13 years old, roams through war-torn Germany, its shattered cities and blighted countryside.

Whether in Argentina where she and her father fled after Germany’s defeat, or years later, back in Europe where she kisses the Beatle, John Lennon, Herra survives, even though she loses pieces of her character such as compassion and love to do so.

Woman at 1,000 Degrees is compelling and repulsive, uplifting and depressive, featuring a character that one admires while not particularly liking. While it will not appeal to those who merely want entertainment, it is required reading for those who want sour along with the sweet of life.