The Woman on the Stairs: A Novel 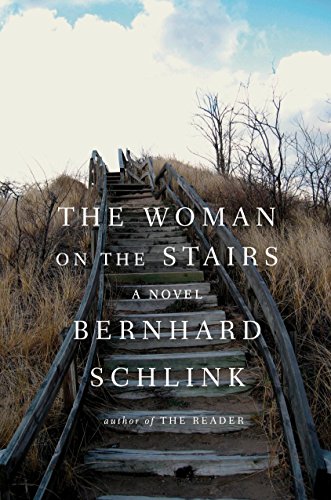 Berhard Schlink’s latest novel is a reminder that his style and his stories are unique, mysterious, and deceptively simple. He writes about big themes like love, obsession, betrayal, and moral dilemmas, and yet his plots appear to be uncomplicated while his characters are few and often not exactly likeable. He is, in short, a philosopher-writer with an interest in history, politics, and what makes people tick.

The Woman on the Stairs is both an aging character and a painting of that character as a young woman. There are three men in her life: Gundlach, a (mostly former) husband; Schwind, the artist who painted her; and an unnamed lawyer engaged in a dispute over the painting between husband and artist.

All of these men have been in love with Irene at the same time but she has remained elusive, physically and emotionally. In fact disappears for years while the three men go on with their lives. When they meet again in later life, the story takes on a new twist when the woman is discovered by all three of her former suitors where she is hiding away on an Australian island.

These details and more hardly seem to matter although they do serve to make the book a page-turner. They are really a vehicle for Schlink’s unique storytelling techniques, providing a framework for his exploration of larger themes that really interest him, including the impact of various choices people make in their lives.

Here, for example, is part of a conversation between the lawyer and the woman. “Are you trying to tell me that the only choices you had were trophy, muse or princess,” he asks her. “Between what Gundlach, Schwind and I wanted from you? With your money and your career, you had every opportunity to find your own identity.” She responds, “You don’t understand, you want to judge. Is that what matters to you? That you can judge me? That you can have a clear conscience? Is this what happens to someone who spends their life with law?”

Conversations like that are the essence of the characters Schlink has created, and they are at the heart of what he is writing about as he explores the human condition. Whether it’s Gundlach and Schwind revisiting their past, Schwind and the lawyer arguing over who has the legal right to the painting of Irene, or Irene and the lawyer quietly playing word games as they process the paths their lives have taken, the various dialogues that take place as the book progresses become, in a sense, the main character.

There are also moments of introspection when the lawyer captures the unease that each of these characters feel and have felt all their lives. At the beach house where they all come together for the denouement, he thinks, “There was a peculiar restlessness in the house, as if Irene couldn’t keep her hands and legs still, as if Gundlach was tossing and turning in bed, as if Schwind was talking in his sleep . . . as if the house were trembling, not shaken by the wind or a tremor, but under the burden of hosting incompatible people. I lay completely still.”

Such passages illuminate the suffering and isolation that each character feels. But more than that, they shine a light on Schlink’s brilliance as a contemplative writer who, through simple prose and complex characters, mediates on life and all its challenges in ways that are as troubling as they are helpful.