The Wolf Wants In: A Novel 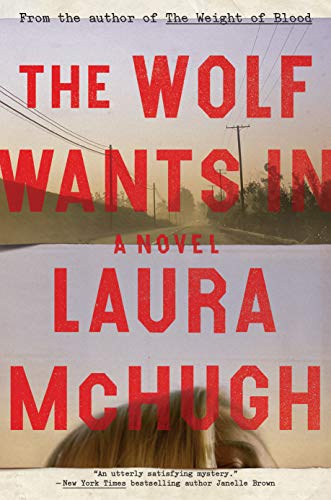 “Those who like a lengthy and sedate description of small-town life in which its inhabitants’ hidden crimes and secrets are slowly uncovered for all to see will appreciate The Wolf Wants In . . .”

Welcome to Blackwater, Kansas, a small town where everyone knows everyone else and also everyone’s business. In spite of that, no one can tell Sadie Keller anything about her brother Shane’s death. His wife even waits before calling his family to tell them of his death.

“It wasn’t unusual for someone to die young in Cutler County—there had been so many overdoses in recent years—but our brother wasn’t an addict.”

Sadie wants answers but isn’t getting any help from Shane’s wife Crystle or the police.

“The detective told me she had real work to do, as if the sudden passing of a thirty-six-year-old didn’t warrant even the briefest examination.”

The discovery of a child’s skull in the woods outside Blackwater warrants more investigation. It could be Macey Calhoun, who disappeared along with her father. At the time, it was considered a parental abduction, but now Sadie’s not so certain.

“I thought of the skull, of whomever it belonged to lying alone in the woods night after night as the moon came and went, and hoped Hannah Calhoun would never have to think of Macey in the past tense the way I still had trouble doing with Shane.”

Henley Pettit is Crystle’s cousin, and she’s in the know about more things her family has done than she’d like. Currently, she’s the housekeeper for the Sullivans, the richest family in town, inheriting the position when her mother, Missy, is jailed for possession.

“She had no interest in a career as the Sullivans’ housekeeper, but Earl paid better than any job she could find in town, and she needed to stay in his good graces for a while, at least.”

Henley’s desperate to escape Blackwater but that’s before she falls under the spell of Jason, the Sullivan heir. Trouble is, the Sullivans have a tragic history of death and accidental murder, and Henley has enough disasters in her own family without taking on Jason’s, too.

“Harlan Sullivan accidentally stabbed his daughter to death with a pitchfork when she hid in the haymow to surprise him. Harlan’s son Earl gave up college to run the family business, and Jason’s mother had died of cancer when he was six. Whether or not people knew Jason personally, they knew he was arrogant and spoiled, and a disappointment to his father.”

While Sadie persists in trying to piece together Shane’s last days and determine the truth of the facts she’s been told, comparing them to the things she knows about her brother, Henley struggles against loving Jason and hiding what she knows about her cousin Crystle’s relationship with Shane.

Over it all hangs the investigation of Macey and Roger Calhoun’s murder and how it ties in with what both women know.

Each hold part of the answer, and it’s only when they put their parts of the puzzle together that the truth will be revealed.

Told in the first person by both Sadie and Henley, the story takes place over several months, and the jumping from one narrator to the other—though notated—as well as the skipping back and forth between months, may be confusing to some readers.

This is a slow-moving, leisurely narration, beginning shortly after Shane’s funeral and moving steadily toward its conclusion. The reader will be given a rich and full history of everyone involved, from the Sullivans to Henley herself, as well as how each character fits into the puzzle but without focusing on any of the participants in particular, other than the two narrators. This makes for a lengthy chronicle, which, though by in no way dull or uninteresting, may make the reader wonder at the outcome.

Though this story covers at least three recent murders as well as one in the past, it may be considered one of the most non-violent crime novels imaginable. Most of the story is narrative exposition, merely one fact after another laid out until the actual moment of discovery seems anticlimactic, with the ironic ending supplied by Henley added as afterthought.

Those who like a lengthy and sedate description of small-town life in which its inhabitants’ hidden crimes and secrets are slowly uncovered for all to see will appreciate The Wolf Wants In, as well as the thoroughness with which the author accomplishes this.