Wolf at the Door by MaryJanice Davidson 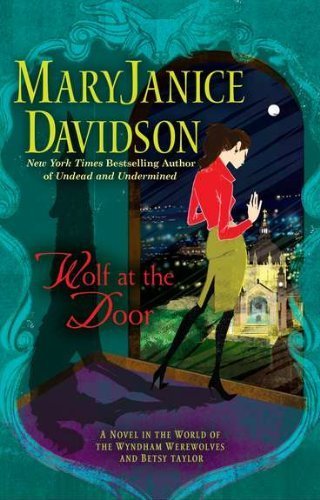 “While formula is a four-letter word in the romance industry, it’s clear that Ms. Davidson has a preferred style, depth, and themes—and that they have worked very well for her. . . . Unfortunately, they didn’t work for me.”

This latest novel from MaryJanice Davidson features an accountant for a hero. If that’s not intriguing enough, the heroine is also an accountant.

Of course, she’s also a werewolf and cousin to the Pack Leader. His best friends are a vampire and a vampire slayer. A mundane occupation can be a plot point, but a paranormal romance needs to deliver a little more.

And, without giving too much away, the mundane occupation is a plot point. And also the source of the few funny one-liners throughout the course of the story.

Rachel adores her cousin Michael, but she’s not happy with him. Taking one for the team is a matter of course in pack life, but that “one” doesn’t normally involve leaving Cape Cod for St. Paul for an indefinite amount of time. But the Vampire Queen, her consort, and her court live in St Paul, and information is vital, especially among the supernatural community. So Rachel packs up her accounting business and heads west.

Edward Bately is in a rut. When an unsolved paranormal mystery pops up—regardless of how tenuous his claim on inclusion in the paranormal world is— he hops on a plane to St. Paul to solve it. Instead, he meets a hot girl in a coffee shop, catches the attention of the wrong people, and learns a whole lot more about the world he lives in.

If not well-versed in the MJD universes already, readers should avoid starting here as this book combines three—Queen Betsy, the Wyndham Werewolves, and an early short story from the Secrets anthology. While some background is covered, it is not enough to catch up new readers on the details—which is a boon for readers already familiar with the characters looking to avoid infodump, but no doubt confusing (Is Betsy insane? Irritating? Kind of brilliant? All three?) to those newly introduced.

Those able and willing to take on Wolf at the Door, however, are going to find MJD’s trademark features: pop-culture references, snark, sarcasm, slapstick humor, and quick, frequent dialogue. As with all of Ms. Davidson’s novels, this one is very light, which—to stray into truly terrible pun territory—offers little for readers to sink their teeth into.

Instead, one is left with the impression that Wolf at the Door was written very quickly to fill in some plot holes—and then edited even faster. What plot there is is brushed over, leaving readers confused as to what the intrigue is, and exactly what happens to see it resolved. The bad guys are second thoughts, their motives impossible to follow, let alone explain though Ms. Davidson does try with a chapter of exposition that makes little sense.

The relationship is clearly the focal point, and a little more detailed, but it too goes from zero to 60 in 50 pages or less. The whole romance takes part over a couple of weeks with little in the way of a story arc—both characters like each other at the start; they continue to like each other; she surprises him, but it’s a nonevent; they like each other in the end.

Characters from both previous novels and this one are paraded across the page with alarming frequency, leaving very little time to develop dimensionality beyond personal wardrobe choices. One subplot—the newsletter—is well handled, but it’s an afterthought, and the reader is left wishing that attention had been paid to the main story.

Einstein defined insanity as doing the same thing over and over again, but expecting different results. This may very well apply to reading MaryJanice Davidson novels as well. While formula is a four-letter word in the romance industry, it’s clear that Ms. Davidson has a preferred style, depth, and themes—and that they have worked very well for her. If they don’t work for you, then there’s really no point in pursuing a reader relationship with her. If they do, then chances are this book will, too. Unfortunately, they didn’t work for me.