The Wolf and the Watchman: A Novel 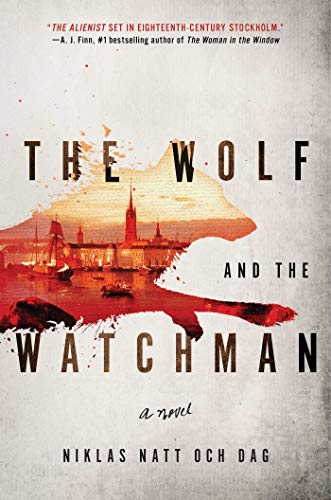 “This is Natt Och Dag’s first published novel, but it seems too skillful and too assured to be his first writing. He has obviously learned from previous miscues and surely has more fine work ahead of him.”

Natt Och Dag divides his book into four sections, each from the point of view of a deeply damaged character. All struggle to survive and some almost achieve a happy ending. The complex and richly realized characters drive this novel, set in Stockholm in 1793.

One winter morning, young boys wake drunken watchman Mickel Cardell to report that a dead body is floating nearby. Cardell suspects a practical joke but follows them to the site and finds a butchered torso. Cardell, who lost his left arm as a soldier and wears a wooden prosthetic that serves him well in fights, still manages to recover the body and report the incident to the police.

Police Chief Norlin assigns the case to Cecil Winge, who has less than a month to live before consumption takes him away. His tireless efforts in court earned him the nickname of “the Wolf,” but now he maintains his sanity by taking his pocket watch apart and reassembling it. He claims to have left his wife because his suffering disturbs her, but he admits to Cardell that he encouraged her to take a lover—and then accidently caught them together.

These two unlikely partners explore the filthy slums and filthier corruption of a town rebuilt in stone after fire destroyed several precincts. They also learn about themselves and how all things and people are connected.

Kristofer Blix, a country boy who has come to Stockholm to make his fortune, becomes the epistolary narrator of the second part of the book. In letters he never sends to his sister (whom we eventually learn is dead), he tells of trying to make his fortune by gambling—sometimes cheating—and ending up the dupe instead of the predator. His debt is purchased by sadistic Johannes Balk, who forces him to pay what he owes through horrifying acts. He eventually finds a path to redemption, but it will cost him everything he has left to offer.

The third section follows the travails of Anna Stina Knapp after she repels a suitor’s attempt to rape her. He accuses her of trying to entice him and she finds herself in prison, at the mercy of sadistic Inspector Bjorkman. Sister prisoner Karen Ersson teaches Anna to stand up for herself—and is ultimately killed. Another prisoner, Johanna, tells her of a hidden tunnel through which she might be able to escape. To gain entrance to that tunnel, she must sleep with Jonatan Lof. Months after her escape, she discovers that she carries Lof’s child.

These disparate worlds connect seamlessly in an ending that is both satisfying and unexpected. Battling the ticking clock of his fatal disease, Winge uses his insight into human frailty to give most of the players a better ending than they deserve. Yes, they are pawns of fate, but Natt Och Dag’s dark ironic tone matches the characters and their worlds perfectly.

Besides the rich and fascinating characters, Natt Och Dag’s greatest strength may be selecting details to convey a city of two centuries past. He eschews long passages of description, focusing on a few key points: the stench of the ubiquitous piles of excrement in yards, the cheaply constructed stone buildings and narrow, filthy alleys. The mindset of the poor becomes a setting in itself. These people have no hope and only the dream of not being exploited and tortured by the corruption above them.

This is Natt Och Dag’s first published novel, but it seems too skillful and too assured to be his first writing. He has obviously learned from previous miscues and surely has more fine work ahead of him.