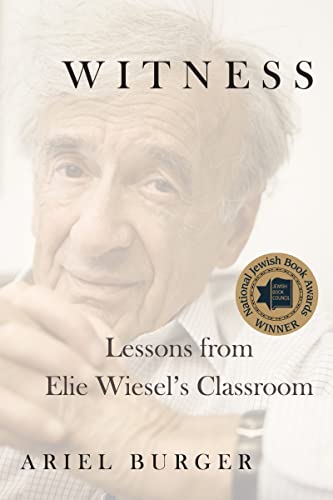 “‘Whatever you learn, remember: the learning must make you more, not less, human.’”

Ask most people what Elie Wiesel’s main contribution was during his lifetime and they are likely to respond that the noted Holocaust survivor was an important writer, a global humanist, and a great thinker. But Wiesel defined himself as primarily and most devotedly a teacher. His student, protégé and friend, Ariel Burger, helps us to understand why he self-identified that way and allows us to be his students too in his touching memoir, Witness: Lessons from Elie Wiesel’s Classroom.

Burger takes readers with him into Wiesel’s classroom and into his study, where he and his mentor shared many meaningful moments. Both are a gift, the former more so because we have much to learn from the Nobel Peace Prize winner who survived over a year in Auschwitz as a teenager, emerging at the end of the war as the only survivor in his family.

The impact of that experience, as readers of Night and Wiesel’s other books will know, was beyond profoundly impactful and gave shape to his lifelong work. That work was grounded in the hope that everyone—at least those whose path he crossed—would come to bear witness to inhumanity, thereby becoming part of a world in which inhumane behavior could no longer exist.

Wiesel, whom Burger met at the age of 15 and studied with for 20 years, was an extraordinary teacher. His resources spanned biblical stories to Bertolt Brecht’s plays as well as classical works of literature and his personal thoughts and experiences, and his teaching style was nothing short of remarkable, drawing students of all ages and academic engagement.

“At the center of the book is Elie Wiesel’s teaching that ‘listening to a witness makes you a witness,’ Burger points out. “Wiesel saw this as the response to the difficult question of what will happen when the last Holocaust survivor is gone: who will tell the story? . . . As long as there are children and students willing to listen with sincerity an attentiveness, the reality of the Holocaust will never be lost.”

But Wiesel’s wisdom and teaching go beyond Holocaust remembrance and the cry “Never Again!” By telling and interpreting stories, by asking his students compelling questions and asking them to go deeper, Wiesel models a kind of teaching that is hard, but not impossible to emulate. His words and work will resonate with writers as well as teachers and scholars.

Here’s an example of him in the classroom at Boston University. After discussing an assigned reading, Wiesel asks a typically challenging question. “How is it that the twentieth century shows us example after example of the radical separation of ethics from knowledge? What do we do with the fact that it is possible to acquire knowledge and use it to harm people?”

The students ponder, and then slowly begin to speak. Wiesel acknowledges their thoughts as useful or important. Then he digs deeper. “I need more” he says, and the conversation continues. Perhaps he tells a story to answer a question, delving into the meaning of the relevant tale. At the end of class, he tells his students, “Whatever you learn, remember: the learning must make you more, not less, human.”

Burger’s personal story of his perpetual search for meaning in his life through Jewish studies is woven into the telling of what he learned from Wiesel, and while both Wiesel and Burger are religious and scholarly Jews, Burger is perhaps somewhat more Orthodox than Wiesel in his daily life. Readers who have trouble accepting the Hasidic way of life, and the unending rituals of learning among men of the Hasidic tradition, may find the accounts of Burger’s unrelenting psychological and intellectual struggles a distraction if not at times an unwanted interruption. But he has done a great service in bearing witness himself to the work and life of a great and humble man, who would probably reject the notion that he was a learned master, a legendary philosopher, and perhaps what one might call an intellectual philanthropist.

At his teacher’s funeral, Burger notes, “tributes from world leaders flooded in. . . . They described a modern saint, the world’s conscience, an icon whose example had influenced millions. Though all this was true, I didn’t recognize . . . the teacher I had known and loved.” He goes on to describe his mentor and friend this way: “He was akin somehow to the Beats and Essenes, the sadhus and dervishes and dancing Hasidim. He was an artist, a writer whose writing was a prayer, a pray-er whose language was silence. And laughter.

Wiesel was all this and more. We are lucky to have been in his classroom and to be privy to his memories, thoughts and wisdom through this important and moving memoir.