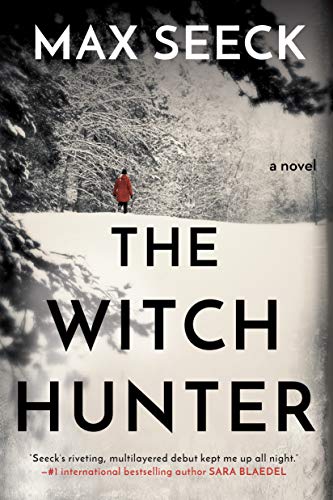 “With its hint of the occult and a powerful storyline, The Witch Hunter is a thoroughly chilling thriller making a solid entry as a first novel in a new series.”

Sergeant Jessica Niemi of the Helsinki police has been called to the scene of a ghastly crime.

While Roger Koponen, Finland’s most famous author, is at a book signing in Savonlinna, his wife has been murdered, her corpse dressed in a black evening gown and placed at the head of their dining room table, her face molded in a ghostly rictus of a smile.

“Have you ever seen anything so creepy?” Koivuaho asks somewhere behind Jessica, but she doesn’t hear the question. The dead woman’s face is twisted up in a hysterical grin. Even her eyes are laughing. The expression is in utter contrast to that fact that this woman lost her life just a moment ago.”

Koponen isn’t a suspect; he was too far away at the time, but he may also in in danger, because it’s quickly obvious that whoever killed Maria Koponen, is following the plots of the bestselling Witch Hunter book series Roger has written.

Taken into protective custody, he’s driven back to Helsinki by another officer. He and his driver disappear, only to be discovered as flaming corpses in a forest between cities.

Then a man is seen in a CCTV tape taken at a subway station. “This guy is a carbon copy of Roger Koponen. If the DNA test hadn’t proved he burned to a crisp last night, we’d swear its him.”

Meanwhile, A woman is discovered under the frozen lake near the Kopenen home, her body thrown to the surface by some mysterious force when Jessica arrives.

Gradually, more victims emerge, and messages, taunting and ironic, are left where the police will find them.

“We have five victims now, and one survived, because for whatever reason, they didn’t want to kill her.”

Soon it becomes obvious that, though the survivors are telling the truth, they are also misguiding the police; not only are they victims, but they are also part of the crimes.

“He wants to be seen. We’re following the tracks the perp specifically wanted to leave for us.”

Jessica  soon comes to realize that somehow this is a conspiracy against her. The killer or killers are committing these crimes to bring them to her attention, but how or why?

Time will tell, as the sergeant slowly unravels the lies, subterfuges, and misconceptions of the case, but does she have time to actually find the killer? Who can be trusted or believed, when even the members of her own squad may be in on the conspiracy?

This mystery set in Finland, is indeed chilling. Too complicated and convoluted to give a concise synopsis, it’s safe to say, this one will keep the reader awake at night attempting to second-guess the plot.

Though each seems at first a cliché, the investigating group of officers is described in detail, and each is given enough individuality and diversity to break the mold: the commanding officer, hiding the disease that is slowly killing him; the young sergeant who’s his protégé and daughter-figure; her partner and good friend, the well-trained technician whom everyone gives a wide berth; and the two officers carrying on what they believe is a clandestine affaire of which everyone is only too aware.

In spite of this nod to the rules of who is who in the detective squad, the moment it’s discovered that Roger Koponen’s novels are the basis for the crimes, nothing else goes according to any kind of mystery novel formula. The police are indeed being led around by their noses, given clues by the killer, being told what they need to know and taunted to guess the rest.

How to solve a crime when the victims are also in cahoots with the perpetrators? While they may be telling the truth, how much of it are they holding back?

That is the question and the investigators go through a great deal of shock and betrayal to arrive at the answer.

The one impediment to this otherwise flawless chiller is the interspersing of an episode from years before in which the younger Jessica has a horrific affaire in Venice. This interruption of the flow of the story wouldn’t be so bad if it pertained to the current narrative. Only the last page of that entire flashback has any bearing, however, and leaves the reader with some disappointment.

That last sentence ending the novel? It will definitely have readers mulling over its significance, and its many interpretations.

With its hint of the occult and a powerful storyline, The Witch Hunter is a thoroughly chilling thriller making a solid entry as a first novel in a new series.