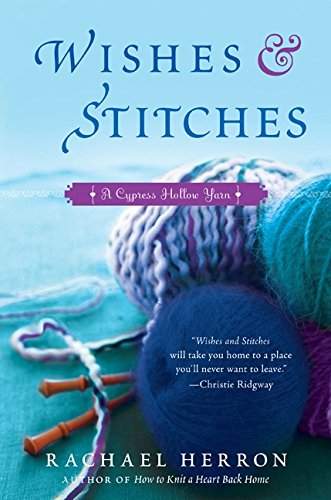 “Wishes and Stitches delivers a heroine with enough issues to be convincingly difficult to love, a hero who’s immensely likeable, several steamy love scenes, and a comfortably familiar small town setting. All in all, a pleasant read for a fall afternoon.”

Wishes and Stitches is the third of Rachael Herron’s Cypress Hollow Yarns, all set in a small California coastal town with the requisite collection of eccentric secondary characters, a knitting shop and a bookstore. Each chapter begins with a quotation from a famous (fictional) knitter and the end papers include a pattern for a wedding shawl, putting the novel in the knit-lit category. However, there’s surprisingly little knitting in the actual story as the heroine is afraid to admit she knits for fear of being mocked by more proficient practitioners of the craft.

In fact, Dr. Naomi Fontaine refuses to admit many things. Socially inept to the point of rudeness, the obsessively private Naomi has not been accepted by the denizens of Cypress Hollow, despite being their doctor for a year. As the story begins, she has just returned from an out-of-town medical conference where she had a mind-blowing one-night stand with a fellow conference attendee.

It is perhaps a little difficult to imagine someone with Naomi’s interpersonal issues engineering such a bold, reckless encounter, but in med school, she treated sex as just another subject to be mastered, so she’s evidently pretty good at it. At any rate, the intimate connection has left her feeling lonelier than ever in her adopted town.

Until Rig Keller strides into the diner where Naomi breakfasts every morning. Of course, he’s her one-night stand. Even worse, Naomi’s absentee medical partner has hired Rig to take over his share of the practice. Rig is Naomi’s polar opposite: totally at ease with people, charming his patients, and instantly embraced by the small town. He’s also a quintessentially sexy man and breathes vibrancy and warmth into Naomi’s life and into the story itself.

Rig, whose perfect nickname came from his occupation as an itinerant oil rig physician, is back in town to support Jake, his widowed brother, and to reconnect with his elderly father. The all-male Keller household includes Rig’s five-year-old nephew Milo, who adds some entertaining comic scenes.

While Rig and his brother have a few differences of opinion about Milo’s upbringing, they are minor. Rig concentrates on fixing Naomi’s many problems. Her health clinic is a dismal failure; Rig rejuvenates it with his great ideas. Naomi alienates her indispensable receptionist/administrative assistant Bruno; Rig orchestrates a reconciliation. She hides her knitting; Rig drags her out of the knitter’s closet.

Naomi is clearly a good, conscientious doctor—even Bruno says so—yet she makes one uncharacteristic mistake which nearly kills someone important to her and Rig. When her pregnant sister Anna shows up on her front porch, it brings forth all Naomi’s profound issues with her dysfunctional family and she says terrible things to Anna, driving her sister into the arms of Rig’s grieving brother. All of which makes it occasionally hard to understand why Rig is so taken with the somewhat unsympathetic heroine.

One possibility is the very hot sexual chemistry between them. As hard as Naomi fights to be a professional and hold Rig at arm’s length, the awareness flares and they succumb to it on several glorious occasions. As a lover, Rig is delicious, and Naomi drops her guard long enough to respond with fervor.

The story comes to full emotional life when Naomi’s and Anna’s mother sweeps into town, blowing open family secrets right and left. At last Naomi’s rigid shell is shattered, and she finds the courage to face her pain.

Wishes and Stitches delivers a heroine with enough issues to be convincingly difficult to love, a hero who’s immensely likeable, several steamy love scenes, and a comfortably familiar small town setting. All in all, a pleasant read for a fall afternoon.