Wish You Were Here: A Novel 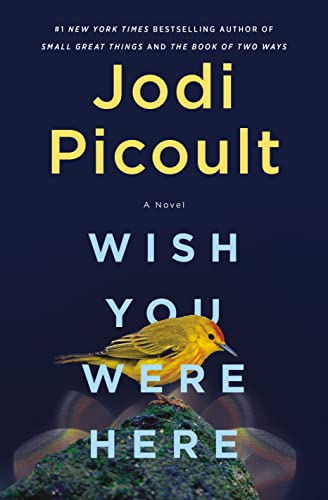 “The stark and concise portrayal of the pandemic gives food for thought about what exactly matters most in one's life.”

Most folks like to plan out their future, and Diana O'Toole believes all her plans will fall in place. She hopes to be married to resident Dr. Finn Colson, the man she loves and with whom she lives, have children within five years, and move out of New York City to the suburbs. Meanwhile, she has an enviable position at Sotheby's as an associate specialist, working in the art world that held her photographer mom and artist captive for many years.

Diana and her boss meet with a wealthy, well-known client hoping to gain her prized Toulouse-Lautrec painting for auction; acquiring this deal could cost her a much-wanted promotion.

Shortly before Diana's 30th birthday, she and Finn plan a holiday to the Galapagos Islands, and she knows he will propose to her. Suddenly, the Corona virus hits, and Finn is needed at the hospital to care for those stricken. He suggests Diana go alone, for the trip is nonrefundable. Unsure, she agrees and leaves the city.

After a long flight, she learns the airlines lost her luggage, and the hotel she booked is closed because of the pandemic. With the whole island under quarantine, where is she to go?

Diana connects with some locals, and Abuela, the grandmother, offers to let her stay in her basement apartment.

"Even though I know it can't be true, it feels like I'm the last person on earth. Since being dismissed by the man from the tortoise breeding center, I have not seen a single soul. There is no movement of light in Abuela's part of the house; the beach is entirely empty. Even if there are no tourists descending on Isabela Island—even if people are being cautious because of coronavirus—it feels as if I've been dropped onto the set of a dystopian movie. A beautiful set, but a very lonely one."

WiFi is next to nonexistent, so she has trouble contacting Finn; they contend with sporadic texts. While stuck there, she forms a friendship with the elderly Abuela, who has taken Diana under her wing though she does not converse in English. Abuela's grandson, Gabriel, is distrustful of Diana at first, as he is suspicious of outsiders. His teenage daughter, Beatriz, is now with him since her mother sent her there, and she is aloof and standoffish. Still, Diana is drawn to the young woman—possibly due to the similarities with their mothers?

As the world deals with the ravages of the virus, Diana experiences safety and protection on the island, which turns out to be a paradise. As she gets closer to Gabriel and Beatriz, she reflects on her life and the plans for her future.

The days turn into weeks, then months, and Diana learns her employment has been put on furlough, leaving her to wonder what is happening. Will she ever be able to return home to her beloved Finn and her dream career?

"The more time I spend on this island, the more clarity I have about the time leading up to it. In a strange way, being stripped of everything—my job, my significant other, even my clothing and my language—has left an essential part of me, and it feels more real than everything I have tried to be for years. It's almost as if I had to stop running in order to see myself clearly, and what I see is a person who's been driving toward a goal for so long she can't remember why she set it in the first place."

The longer she remains at this tropical paradise, she sees her world change:

"Here, I can't lose myself in errands and work assignments; I can't disappear in a crowd. I am forced to walk instead of run, and as a result, I've seen things I would have sped past before—the fuss of a crab trading up for a new shell, the miracle of a sunrise, the garish burst of a cactus flower. Busy is just a euphemism for being so focused on what you don't have to ever notice what you do."

With Gabriel as her guide, Diana explores areas only known by the locals. They swim in secluded lagoons, hike the mountains, trek through lava arches formed by long-ago volcanos, and explore the jungle with all the intrinsic beauty of the area.

Beatriz confides to Diana about her pain of being abandoned by her mother, and Diana confesses her circumstances were similar. Her mother seemed more involved in traipsing the world for her photography and leaving her alone with her father. The two become close, and the girl begins to trust Diana—that is until she catches Diana and her father in bed together. Filled with regret and guilt, Diana chastises herself. What is she doing?

"I have always believed we are the architects of our own fates—it's why I so carefully planned my career steps and why Finn and I dreamed in tandem about our future. It is always why I could blame my mother for choosing her career over me—because it was just that: a decision she made. I have never really subscribed to the mantra that things happen for a reason. Until, maybe now."

As the world copes with the current crisis, everyone wonders if things will ever return to normal. This is especially true for Diana, who, before long, must face what is real. Has this all been a dream? What is to become of her and her life?

This novel offers an exciting and colorful escapade describing the Galapagos Islands, giving the reader a visual journey of the area. However, by confronting reality, we are brought back to the heartbreak and terror caused by this virus, which has shaken the planet and changed life for everyone. The stark and concise portrayal of the pandemic gives food for thought about what exactly matters most in one's life.