Wisconsin Sentencing in the Tough-on-Crime Era: How Judges Retained Power and Why Mass Incarceration Happened Anyway 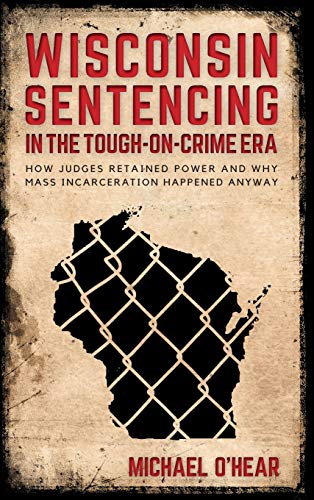 “The criminal justice system has adapted itself to the world of mass incarceration.”

In Wisconsin Sentencing in the Tough-on-Crime Era: How Judges Retained Power and Why Mass Incarceration Happened Anyway, Michael O’Hear uses his expertise as a professor of law to discuss the history of sentencing in Wisconsin since the 1970s. Throughout the book, O’Hear examines sentencing policy, practice, and ideology, concluding with recommendations to reduce the prison population.

While mandatory sentencing guidelines are often cited as the primary contributor to mass incarceration nationwide, O’Hear cites an alternative reason for mass incarceration in Wisconsin. Wisconsin has fewer mandatory minimum policies than many states, as well as the federal system. Consequently, judges in Wisconsin exercise a considerable amount of discretion when sentencing offenders.

Moreover, the sentencing guidelines in Wisconsin provide little guidance to judges. In fact, these guidelines have not been effective at eliminating judicial discretion, and many judges have taken a punitive approach when sentencing offenders to prison. This discretion has, in part, contributed to the state’s high incarceration rates.

O’Hear examines the history of sentencing in Wisconsin from the “seventies synthesis” to the “millennial synthesis.” In this context, a “synthesis” refers to sentencing policies and practices for a particular era. In the 1970s there was considerable judicial discretion in Wisconsin, and probation and parole were widely used. During this time period, professionals relied on rehabilitation and their own expertise to manage threats to public safety, while incarceration was used as a last resort.

However, in the 1980s and 1990s, correctional philosophies became more punitive. This was considered the height of the “tough on crime era,” which promoted mandatory sentencing, habitual offender, and truth-in-sentencing laws. Offenders were more likely to be sentenced to prison and less likely to be paroled. During this period, policy makers also viewed rehabilitation as an unfavorable sentencing philosophy.

O’Hear discusses how sentencing and incarceration have stabilized during the “millennial synthesis.” While there has been a decrease in local jail populations in Wisconsin, there has not been one within the state’s prison system. During this period, judicial discretion has continued to be widespread, the state continues to incarcerate offenders aggressively, and there is no discretionary parole—meaning that offenders are serving all of their sentence in prison.

Although Wisconsin’s prison population has remained stable since the turn of the century, there is little hope for significant decreases in the prison population. O’Hear highlights how increased rates of incarceration have not contributed to significant reductions in crime.

Furthermore, Wisconsin spends more money on prisons than it does on universities. Aside from financial costs, the negative effects of mass incarceration extend to prisoners and their families, including financial burdens, difficulties meeting basic needs, and mental health issues.

Even though the prison population seems to have stabilized, reform is still needed. In order to limit judicial discretion in sentencing, O’Hear suggests that sentencing guidelines be presumptive and designed to limit excessive imprisonment. He also suggests that local officials be given more control over alternatives to incarceration to promote successful rehabilitation of offenders. This will allow for more innovative programming to fit the needs and resources of specific communities. Finally, he suggests awarding good-time credits to inmates who participate in programming, allowing them an early release from prison.

Wisconsin Sentencing in the Tough-on-Crime Era is well written, and it addresses many issues that have plagued our correctional system for decades. O’Hear’s recommendations for sentencing reform in Wisconsin could also be used to promote decarceration in other states throughout the nation. This book is highly recommended to judges, academics, students, or anyone interested in learning more about effective sentencing reform.