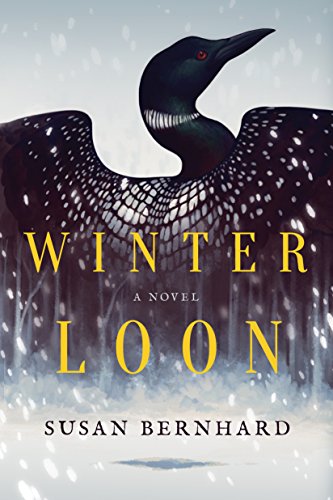 “Winter Loon, a debut novel, is both emotional and skillfully written. Though it may be considered depressing, an inspirational facet is revealed through the eloquent and dynamic prose.”

No family is "normal" or perfect, for everyone deals with some type of dysfunction, as is glaringly shown in the Ballot household. Mom Valerie and dad Moss live on the edge of poverty and are raging alcoholics. Their days consist of being in a drunken haze with constantly escalating arguments. Who is bearing the brunt of it? Fifteen-year-old Wes. And the older he gets, the more chaotic his home life becomes.

Moss often leaves for long stretches of time allegedly searching for a job, abandoning mother and son. When they are evicted from their tiny apartment, they end up residing in a shack in the woods. One day, after a vicious confrontation, Moss takes off, leaving an inebriated Valerie and Wes holed up in his room trying to ignore the situation. Later, sound asleep, Valerie drags Wes out of bed into the cold winter night to go to the lake. Mesmerized by the loons— though they supposedly head south to get away from the harsh Minnesota climate—she swears one is out there.

Wes begrudgingly follows her and when she crashes through the ice and into the frigid water, he tries to rescue her, but cannot. He grabs onto his mom's hand and she appears to pull him in with her. In horror, he watches her sink and he is later discovered curled up in a ball on the shore.

He is rushed to the hospital; lucky he doesn't perish from hypothermia. Moss is located at a nearby bar, totally intoxicated, and comes to Wes's aid. After burying Valerie, he takes Wes to his maternal grandparents' home, promising to come back for him when he attains gainful employment.

Wes doesn't know if living with his mother's parents is better or worse than being with Valerie and Moss. Given Valerie's childhood bedroom amid her possessions, he is forced to deal with Gip, a cantankerous drunkard with a nasty attitude toward almost everyone, and Ruby, a chain-smoking shrinking violet afraid to stand up to Gip's abuse. Furthermore, they refuse to discuss Valerie and show their contempt to him for interrupting their lives.

Wes meets Kathryn Rook, a local classmate whose father owns the bank holding the title to the grandparents’ home. Gip despises the man and is happy Wes is dating his daughter, knowing what the elder Rook thinks of him. But soon, Wes comes across Jolene Oliver, a Native American and instantly falls in love with her, much to Kathryn's shock.

Gip and Ruby also display their prejudice for the girl and their aversion to Wes for being with her. But Jolene and he share a common bond: They both have lost their mothers. Now Jolene is being raised by her aunt Mona and uncle Troy Hightower and Wes discovers a pleasing and harmonious family life within their home as shown with his first encounter.

"The Hightower house was a rundown ramshackle, its blistered brown paint peeling like a sunburn. The front-door screen had a dog-shaped hole in the bottom. Mismatched lawn chairs and tires turned to flower gardens littered the side yard. I imagined it was that house where kids gathered to run through sprinklers on hot days, where kick-the-can games ended at night. I loved it the moment I saw it. I had never been in an Indian's house before and the conditioning I'd gotten my whole life—to be wary, suspect—put me on edge. I didn't know whether I would be welcomed or turned out. I felt the white on my skin like dried paste."

Wes and Jolene become close, and tensions flare with his grandparents, and Wes learns shocking information regarding his mother. At first, he wants his dad to return and take him away, but spending time with Jolene and her relatives makes him imagine being part of a real family.

Through the hardships and heartaches Wes endures, he matures, facing reality and realizing happiness comes from inside. He vows to be a better man than his father and grandfather, and though he struggles, he grows strong and gains confidence in himself despite the horrors and anguish he faces. The disparity between characters is spot on and somewhat distressing at times, though each one augments Wes's journey to manhood.

Winter Loon, a debut novel, is both emotional and skillfully written. Though it may be considered depressing, an inspirational facet is revealed through the eloquent and dynamic prose.