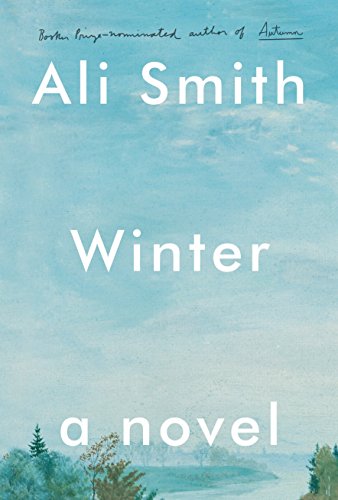 When Autumn was published 15 months ago—the first in a planned “seasonal” quartet by the award-winning, Scottish-born writer Ali Smith—it was dubbed “the first great Brexit novel.” So what does that make Winter, the next in Smith’s series?

Well, it’s a novel partly about climate change, although not the first. It also touches on Trump, Brexit, Syrian refugee camps, and even the 1980s cruise missile protests at Greenham Common in England.

Let’s just call it another enthralling Smith story, peopled by richly imagined characters, interwoven with insights into art, truth, and politics, that adroitly ambles in and out of chronology—while also, for the purposes of this series, regularly connecting the action to the eponymous season.

“He never wants to see another Christmas Day again,” muses one of the main characters, Arthur Cleves, a 20-something Internet patent consultant and surprisingly sympathetic slacker, nicknamed, appropriately for the book’s themes, Art.

“He wants real winter where woods are sheathed in snow, trees emphatic with its white, their bareness shining and enhanced because of it, the ground underfoot snow-covered as if with frozen feathers or shredded cloud but streaked with gold through the trees from low winter sun, and at the end of the barely discernible track, along the dip in the snow that indicates a muffled path between the trees, the view and the woods opening to a light that’s itself untrodden, never been blemished, wide like an expanse of snow-sea, above it more snow promised waiting its time in the blank of the sky.”

Arthur has brought a faux-girlfriend named Lux to his mother’s sprawling 15-bedroom home in southwest England for the 2016 Christmas holiday, because he doesn’t want to admit that his actual live-in girlfriend, Charlotte, has dumped him. Not only did Charlotte abruptly move out— furious that his “Art in Nature” blog ignores politics and climate change— but she has also been hacking his Twitter account to send out deliberately ignorant and even salacious messages.

“Just letting you all know that I charge L10 a snow-job or L5 mates rates for followers,” she Tweets, being sure to include Arthur’s cell-phone number.

Sophia, Arthur’s iron-disciplined mother, hardly notices the girlfriend switcheroo. For one thing, Sophia is now involuntarily retired, because her once-thriving “antiques” business—selling antiques as false as Lux’s identity —has collapsed. More challenging, as the novel begins, Sophia is being followed around by a head.

“It had a face, and a thick head of hair a couple of inches longer than itself, straggly, rich, dark, wavy-straight, rather romantic like a miniature cavalier . . . It was sweet, and bashful in its ceremoniousness . . . and it didn’t seem the least dead.”

When Arthur and Lux arrive at the darkened, overheated mansion, they discover an empty refrigerator and an emaciated Sophia sitting at the bare kitchen table, “wearing a buttoned-up coat, a scarf, sheepskin gloves and a fur hat of a thickness that makes her head look animal.”

They summon what would seem the worst form of assistance: Sophia’s long-estranged older sister, Iris, a passionate veteran of nearly every left-wing protest going back some four decades.

At the kitchen table on Christmas Day, as Arthur and Lux try to maintain a discussion about the most beautiful things they’ve ever seen, Sophia starts talking directly to the wall while Iris addresses the ceiling:

“It is no wonder my father hated her. (His mother.)

“Our father didn’t hate me, he hated what had happened to him. (His aunt.)

“And mother hated her, they both did, for what she did to the family. (His mother.)

“Our mother hated a regime that put money into weapons of any sort after the war she’d lived through, in fact she hated it so much that she withheld in her tax payments the percentage that’d go to any manufacturer of weapons. (His aunt.)

“My mother never did any such thing. (His mother.)

“I know she did. I’m the one who helped her work out the percentage every year. (His aunt.)

By now, readers know to expect high quality from Smith: Four of her novels (including Autumn) have been shortlisted for the Man Booker award; she has won numerous other prizes; and she is a Commander of the Order of the British Empire as well as a fellow of the Royal Society of Literature.

Still, is it nitpicking to wonder if Smith pushed too hard by publishing two novels so quickly after the Brexit vote and the U.S. presidential election?  Lux, for one, feels rushed; she needs more depth and more flaws, to be as alive as the other characters.

“How could she know more about his own culture than he did, and such interesting things, and not just know them but know them so well that she could make jokes, make jokes about a culture that isn’t her culture and in a language that isn’t her first language?” the lovelorn Arthur rhapsodizes about Lux, a refugee from Eastern Europe who was raised in Canada.

And what about the disembodied head, by the way? That got resolved pretty abruptly.

Well, whether or not you like the snowy fantasyland of a northern winter, Spring and Summer are usually even better.