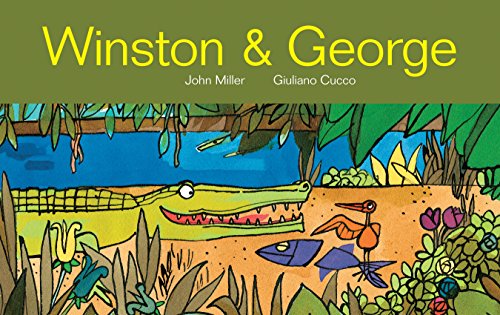 Winston & George highlights a surprising friendship between a crocodile and a crocodile bird and, at the same time, an unlikely publication, capping a creative collaboration that occurred 50 years ago in Rome.

Art directors snubbed the vibrant illustrations then, saying they were “too costly” to reproduce, notes the author. The rejected picture book was packed up and, in time, forgotten. Luckily, John Miller uncovered the work while adding insulation to his attic. Despite years of dust, neglect, and exposure to roving mice and rodents, the art emerged in pristine condition, ready for some spirited publisher to release it.

The fresh and funny story, along with its bright, energetic full-page illustrations, retains its power to please. Oozing with lush tropical hues that reflect the alluring setting of a languorous jungle river, Cucco’s watercolors buoy the simple but dramatic story.

Winston is “a very, very patient crocodile” who spends his days with a water bird named George. Like the monkey Curious George, this bright little bird delights in playing pranks, even on his best friend.

Depite—or because of—his mischief making, children will relate to George and will want Winston to resist the other crocs’ advice to devour the pesky bird. The wise crocodile understands that tricks aren’t the only things George offers; he’s also a devoted, vigilant friend who helps him by spotting fish and then shouting for Winston to dive.

The bold bird finally goes too far, though, when he notices a shoal of soft mud on the bottom of the river, yells “Dive!” and causes his friend to get his snout stuck in the mud. Even George sees he made a mistake, but he can’t fix it alone and finds it difficult to convince others to help after having tricked them so often. George demonstrates his real benevolence by deciding to do whatever it takes to rescue Winston, even if it means getting devoured.

This amiable friendship story is complemented by simple information about crocodile birds, which live in Africa and “keep company with crocodiles along river banks.” In fact, these water birds do cry out as soon as they see danger, and they help crocodiles by picking leeches and lice from their leathery, scaly skin.

Lamentably, no sequels will explore the pals’ further adventures, as Cucco died in a motorcycle accident, according to a concluding note. Yet readers can hope to encounter three more books the pair created in the 1960s. Enchanted Lion, known for its creative children’s books translated from various languages, also plans to release a biography author Miller has recently written on the Italian artist.