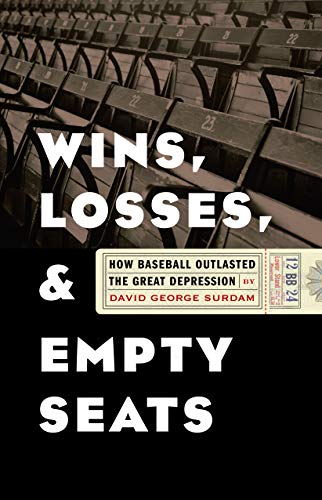 “Surdam’s book represents the best and probably the only solid study of major-league baseball’s economic situation during the Depression.”

This scholarly study by a professor of economics gives us the history of professional baseball’s struggle to survive the Depression of the 1930s, explaining how and why individual clubs as well as leagues not only scraped by, they often made money.

The author, David Surdam points out that the clubs were affected partly because they were all located in the northeast quadrant of the country, where depression hit very hard. Then he poses questions he will address on how the major league clubs coped with the severe economic downturn.

Although Black Friday occurred in the fall of 1929, not until 1932 did Americans curb their spending on spectator sports, and by 1935 baseball was already returning to profitability. How did the baseball club owners manage that feat?

One way was by finding methods of keeping more income, such as by clever reporting of expenses. Clubs found that they could “expense” a player like Babe Ruth as a “durable commodity.” They could also amortize park expenses and improvements as well as player purchases.

Although some big player salaries were cut, most remained about the same. Owners saved in other ways, such as revoking the per diem food allowance and forcing players to charge only for what they actually consumed. Owners also used the farm system and working agreements to cut costs, sometimes unnecessarily prolonging a player’s stay in the minors. The reserve clause kept player trades and sales under control.

Since the fans wanted to see games played between teams of approximately equal ability, owners worked to even the power of clubs by better revenue sharing. Unfortunately for them, those efforts didn’t help competitive balance between clubs.

Some teams tried to manipulate the schedule to give them dates on which they could expect high attendance, such as on holidays, but the advent of night games complicated those efforts. Those club owners willing to take a chance on night ball did well with it, and others gradually reconsidered their original objection to it as lighting improved and players got used to playing under lights.

Emphasis on concessions in the park really paid off for the owners; the amount they earned from selling hot dogs and beer actually increased during the Depression. Radio, although at first feared as a possible attendance reducer, eventually increased club income because clubs found that they could charge the stations for the use of games on their broadcasts. Other devices to improve the fans’ park experience appeared to boost attendance, like numbering uniforms, using a public address system, and dealing firmly with rowdy fans and gambling.

The sources listed in Mr. Surdam’s bibliography display his solid research. He also backs up many of his points statistically by including an appendix packed with statistical tables that should be appreciated by those who grasp their value. Those of us whose eyes glaze over with the mention of statistical “standard deviation” and economic formulas like the “Coase theorem” need not worry; the author gives us plenty of straightforward, non-statistical explanations for his statements.

Of course, when World War II started, the owners found themselves facing different challenges. They responded just as nimbly to wartime restrictions as they had to the tight money situation of the thirties. I can’t help wondering if their legal protection against antitrust legislation and their situation as a legal cartel, which the author mentions early, might have given them support that other industries could not match, and I wish that the author had explored that question.