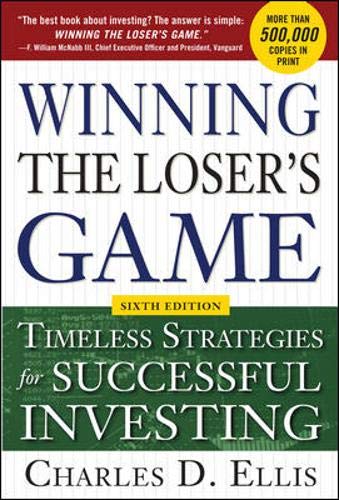 In 1975 Charles Ellis published an article in the highly regarded Financial Analysts Journal that advanced the provocative proposition that investing is a game dominated by losers. Even though his central thesis that investing is a losers’ game represents a profound challenge to accepted conventional investing thinking, his paper was recognized with the Graham and Dodd Award for Excellence.

Winning the Loser’s Game: Timeless Strategies for Successful Investing is the fuller development of the reasoning and implication of his thesis. Indicative that his message has legs is that over a half million copies of the previous four editions have been sold. The esteemed management guru Peter Drucker lauded an earlier edition proclaiming, “This is by far the best book on investment policy and management.”

This book was inspired by Dr. Simon Ramos's observation that tennis really involves two games. According to Dr. Ramos, winners of the winner’s game—which involves a handful of professionals and very talented amateurs—most often prevail by making the winning shot.

In the loser’s game, played by amateurs, outcomes are determined by the losers’ mistakes, for most of the points in the games played by the non-pros are won by the player who does not make mistakes.

Analogizing investing to tennis, Mr. Ellis avers that investing outcomes are determined not by the shrewd strategy and excellent execution by the winner. Rather, investing outcomes are determined more by the losers’ mistakes than by the winner’s proficiency. The key to winning the investing game, then, is not making mistakes. And, the best way not to make mistakes is not to seek to score by shrewd strategy or superior technology. Instead, Mr. Ellis advises adapting a passive, match-the-market-index strategy.

In making his case, for redefining investing winning as not losing, Charles Ellis takes his readers on a tour that is more philosophy than technique, verging on a manifesto, even a meditation, on investing. If Winning the Losing Game is a meditation on investing explored through the prism of games—their essence, purpose, and definition—then it is relevant to consider what games and their winning involves.

In his provocative, illuminating, Finite and Infinite Games (Free Press, New York, 1986), James P. Carse asserts, “There are at least two kinds of games. One could be called finite; the other, infinite. A finite game is played for the purpose of winning and infinite games for the purpose of continuing the play.” Mr. Ellis’s investing manifesto in some ways parallels Carse’s enlightening treatise, both being philosophic journeys, exploring players, power, motivations, place, and time.

To read Carse is to discover that games have many facets and that their meaning derives from interdependency of assumption, anticipation, perception, experience, reflection, and thinking. Just as is the concept of a game—once you unpack its many attributes, implications, and nuances—is far from simple, so, too, is the investing game far from simple.

Investing is amongst the most fascinating of games, because so many forces—nature and engineering, society and culture, religion and competition, politics and regulations, technology and innovation, business strategy and pricing power, crowd psychology and individual deceit—influence its participants’ fear and greed, their decisions, and the consequences of these decisions.

To comprehend the investing game, you must consider not just tactics and techniques but meta-level forces. Thus, a philosophy of investing is the appropriate strategic foundation.

Independent of the discouraging implications of the inherent knowledge and information disadvantages that constrain many in seeking competitive investment performance, Mr. Ellis cogently cautions that the system is rigged against investors’ interests and tilted to favor the interests of those who help themselves—even through helping investors presumably is their function.

He trenchantly observes that the job of stockbrokers and mutual fund salespeople is “not to make money for you. Their job is to make money from you.” Suggesting that a typical stockbroker may each year need to generate gross commissions of 6% of his or her clients’ money, the author points out that “to generate this volume of commissions, which is a heavy expense to the investor, a broker cannot afford the time to learn what is ‘right.’ He or she has to keep the money moving and it will be your money.” This intuition about the rewards realized by those engaged in keeping money moving is unequivocally substantiated by the dominant share of the economy claimed by the financial services sector.

The proposition that investing is a loser’s game follows from his observation that “accurate investing is a seriously negative sum game. To achieve better than average results through active management, you depend directly on exploiting the mistakes and blunders of others.” Mr. Ellis argues that the majority of investors are in a can’t-win position, as they lack the skill and resources to compete effectively with pros, who possess superior training and resource advantages.

Investors’ returns, of course come from what may remain after paying the 6% commission norm. As long-term realized stock market returns before considering commissions and related expenses average 9% to 10%, not much remains. What to do?

How should investors play a game that is dominated by losing? If the only way to win is to avoid making mistakes, how can investors learn what they need to know so that they do not make those mistakes?

After 95 pages discussing the challenges of playing what is fundamentally a loser’s game, Mr. Ellis reveals his insight: “The winner’s game investing—open to all investors, so every investor can be a real winner—is almost easy. Almost.”

He suggests that the conventional thinking about the complexity surrounding investing appropriately can be unbundled into five separate levels of decisions:

But what if not losing is neither the game you want to play nor the outcome you wish to seek? While some might be tempted to avoid the game entirely— after all, who wants to play a loser’s game?—as a practical matter, most cannot reasonably and responsibly avoid confronting investing issues. Are (1) probable market matching and (2) seeking to win a game you cannot win, the only two viable strategies? No.

Successful investing can seem like magic. Most readers of Winning the Losing Game will be awed and impressed by the author’s magic, not getting the secret of the major trick. In the investing realm, just as in magic, things are not always what they seem. Indeed, the essence of magic is to “trick” the audience into seeing—or thinking they saw—something that was not really there or did not really happen.

Most magicians are loath to reveal their secrets. The secrets of some magicians, however, can be discerned through careful observation, diligent study, and creative thought experiment. By combining applied knowledge and analysis, you can discover the secret to the magic trick in Charles Ellis’s book. The hidden secret, revealed a careful reading of Winning the Loser’s Game combined with critical analysis, is that there really is a third option, which embraces strategy, knowledge, and guidance.

This conclusion about a third option is reached the same way an effective investing strategy is developed and implemented by such investment pros as Warren Buffet though Berkshire Hathaway, David Swenson of Yale’s endowment (who writes a glowing preface for Charles Ellis’s book), and Charlie Ellis himself.

This third option involves developing strategy knowledge and rigorously applying that knowledge. But to grasp this third option, you have to study the magic manuals, be an insider—or known someone who is—rather than an audience member, and apply both ingenuity and hard work.

Slyly, in relating a personal story of his own investing acumen, applied through committing disproportionate capital to John Neff’s Gemini Fund, Mr. Ellis lets his readers in on the magic trick, which decision resulted in a most rewarding outcome. The unsophisticated should readily recognize that the capacity to perceive this opportunity and the reasoning that validates the investing thesis could only be possessed by a sophisticated professional, such as Mr. Ellis. Fascinatingly, the author made this investment in the very year that he published his You Can’t Beat The Market Loser’s Game thesis.

3. Deciding to few are manage your investments independently—a most daunting tasks that equipped professionally or emotionally to undertake—or select an advisor, aka wealth manager or financial planner, to work with you concerning your investment.

4. Developing your strategy concerning investing policy, portfolio allocation, and decision criteria re manager selection: either independently, in collaboration with your advisor, or delegate that task to the advisor.

5. Delegating implementation of your strategy to your advisor/wealth manager.

6. Managing your objectives, your strategy, plus your wealth manager advisory relationship.

How to implement this third option is the subject of a very important book, but not this book. As entertaining as is this book, as sound as is much of its reasoning, and as much as I admire Charlie Ellis—by way of disclosure, he is a friend whom I have known for nearly four decades—the overall thesis and teaching fall short in certain critical dimensions:

One especially glaring omission is that the investment universe presented reflects only the traditional thinking of stocks, bonds, and cash. Significantly, though real estate represents a larger share of the global wealth portfolio than corporate equities, real estate as a credible investment class is largely omitted.

While Winning the Loser’s Game contains a wealth of insight, perspective, and stories, the message of this book is necessary but not nearly sufficient for successful investing in the 21st century. In application, the winning investor process is considerably more nuanced, comprehensive, and sophisticated than what is discussed here.