On Wings of a Lion 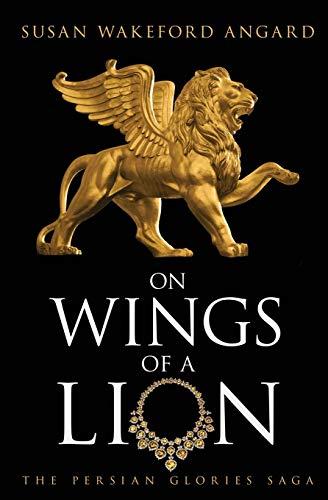 "On Wings of a Lion is a debut novel that far surpasses expectations."

Set in the days of the Shah of Iran's deposition in 1978, On Wings of a Lion is a sweeping historical epic with a twist of romance and the pacing of a thriller.

Kathryn Whitney's career is in the dumps. She badly needs this Boeing Super Bowl commercial to resurrect her career. The commerical is set to shoot in Iran, during a time of revolution and domestic upheaval, wherein the SAVAK, Iran's secret police, is casuing mayhem and terrorizing its population, many of whom are trying to leave the country but find themselves thwarted at every turn. Kathryn, while at a bank arranging for the commercial's financing, sees a display case housing the Persian Glories, a priceless collection of canary diamond jewelry with a history all its own. She is awed and impressed. Little does she know that she is about to meet its owner.

In comes photographer Anthony Evans, hired to shoot the stills for the commercial. Anthony is handsome, charismatic, polished, and a world-class playboy. Immensely talented, he manages to charm the entire crew. Kathryn hates him on sight. He is everything she cannot stand, and she cannot wait for him to be finished with his part of the project.

But there is more to Anthony than meets the eye. He is both British and Persian, and is constantly town between the two identities and his love for both countries. His parents were murdered when he was young, and he still bears the scars of their unsolved murders. He is also a covert helicopter pilot who saves innocent families from the secret police while helping them escape Iran. He may drive fast cars and may be known for dating fast women, but his exterior hides a much more complicated interior.

Complicating matters further are Anthony's cousin Mirdad and his mother Rena Ajani. Rena aspires to possess the Persian Glories, which she believes should have gone to her and not to Anthony after her sister's demise, and her son Mirdad must balance his loyalty beween Anthony and his mother. Mirdad, complicated in his own right, also has some compelling secrets that could bring him far down—in his life and in Anthony's esteem.

The shoot proceeds well with Kathryn's crew, which she has brought with her from the States. Then an unexpected encounter with the Black Gloves, a covert terrorist group of the SAVAK, puts her life and the lives of her crew in danger. Kathryn is infuriated, but she must learn to navigate the political situation in order to finish her job and get her crew out safely. Meanwhile, Rena's hatred for Anthony and her pursuit of the Persian Glories heats up when she enlists an official high in the goverment to help her in her mission to wrest the jewels from Anthony for once and for all.

Author Susan Wakeford Angard keeps the pacing of this novel nearly breathless. The characters are all flesh and blood, fully drawn and well-explored amid the action, even the supporting characters in Kathryn's crew. The writing is sublime, with the setting of Iran so exquisitely explored that you can hear the sounds, see the incredible historic sights, and even smell the Persian cooking. And the descriptions, down to the tiniest details, are so seamlessly woven into the novel that the action never slows. The blending of the romance, historical fiction, and thriller genres makes this book a winner on many levels.

On Wings of a Lion is a debut novel that far surpasses expectations. The drama of the revolution, set across the backdrop of a beautiful country in turmoil, establishes a sense of urgency that explodes when Anthony is called upon to save an Iranian family before they are captured by terrorists. Kathryn, who has developed a bond with Anthony despite her best judgement, is a female protagonist you can root for. She is creative, warm, brave, and fiercely driven. And those lovely jewels—in whose hands will they end up? You'll have to read the book to find out.