With Wings As Eagles: The Eighth Air Force in World War II 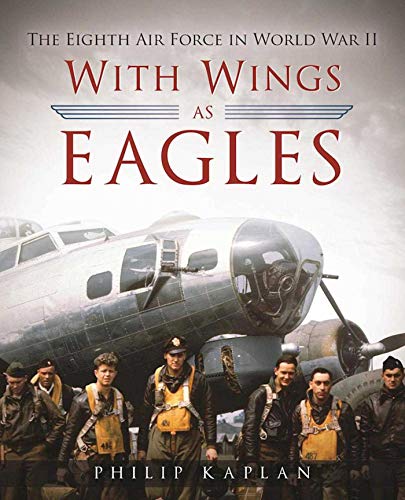 “another fine tribute to those who put their lives on the line for those of us who have come after them.”

One can find a library full of books on the Eighth Air Force in World War II, everything from personal memoirs to full-blown histories of the most well-known aviation formation that fought in the European Theater of Operations. Should another be added to the canon?

In this case, yes, author and former magazine art director Philip Kaplan has made an outstanding contribution that honors and remembers those who served in this Army Air Force with a publication which combines text and many photographs. Indeed, it can be described as an illustrated history.

The former in multiple instances are reminiscences of many who experienced the air war over Europe. The latter accompanies these showing many heretofore unseen black and white shots of the time with numbers of contemporary color photographs of surviving wartime aircraft and airfield locations in the English countryside, among other subjects.

The book’s chapters cover just about everything from a history of the Eighth, its component aircraft (bombers and fighters), weapons, equipment and ordnance, the fliers themselves and their experiences, to its cinematic influence on Hollywood, the fear factor and psychological consequences, relations with the locals, and weather and other climatic conditions to evaders and prisoners of war.

The personal reminiscences range from multiple, short paragraph length quotes within a chapter to one individual’s longer and virtually entire chapter length text providing a considerably closer look into that flier’s perspective and experience.

Insofar as the text is concerned, highlights are the personal stories and how the air war was portrayed by Hollywood. One chapter shows the tragic nature of air combat, detailing the experience of Bert Stiles who had completed his tour of duty in bombers, requested transfer to fighters, and was killed in a combat-related air accident.

Given considerable coverage is the well-known film Twelve O’Clock High, nominated for four Academy Awards in 1949 and originally written by two men who had actually “been there.” Other quality air war films mentioned include Command Decision, The War Lover, The Great Escape, Fighter Squadron, and Memphis Belle.

Each chapter is well-illustrated with relevant photographs, including a two page, no-text “chapter” which is comprised of color photographs of A-2 bomber jackets worn by members of various bomb groups that flew missions over Europe.

The photographs include those of aircrew portraits, aircraft, airfields, facilities, weapons, equipment, and clothing. They show the emotional and physical toll taken on the fliers by combat as well as happier days when they had down time from flying due to weather or lack of mission assignment.

Again, photographic highlights are the color shots, some actually from wartime and others more recent. These latter are of surviving and restored aircraft, mostly P-51s but also a B-17. Those of now abandoned airfields in England show the ravages of time on weeded runways, Niessen huts, control towers, and other facilities.

There is an “operational summary” or short history at the end by Eighth Air Force Commander James “Jimmy” Doolittle. Included as well are highlights of the Eighth’s combat operations from January 1942 to May 1945.

Statistics of its heavy bombardment effort from the inception of operations in August 1942, include sorties, bomb tonnage, aircraft losses and enemy aircraft losses destroyed, claimed, probable, etc., in addition to information on total flying time, gasoline and ammunition consumption, a glossary of operational definitions and a list of awards and decorations.

Not surprisingly, the list of photo credits, acknowledgements, and bibliography is quite extensive. There are no footnotes, yet that is to be expected in what is essentially an illustrated history.

Although Skyhorse doesn’t necessarily come immediately to mind in terms of World War II publishing, this establishment has produced a quality, visually appealing, well-formatted, eminently affordable book that should catch the eye of discriminating readers, certainly for those whose interest may lie in aviation, the Eighth Air Force and/or World War II.

As the “Greatest Generation” is rapidly departing the earthly scene, this is another fine tribute to those who put their lives on the line for those of us who have come after them. Their exploits and sacrifices deserve to be remembered: in writing, photographs or otherwise.