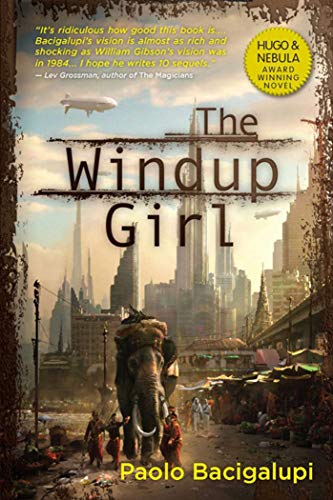 This is a world where calories are more precious than gold—where crops are engineered sterile by the titans of the industry, and the side effects of their genetic mistakes afflict the world at large. This is a world where bio-terrorism is a casual business transaction. Welcome to the world of The Windup Girl.

Emiko is a windup—a humanoid, genetic hybrid programmed to obey, and misused as a slave on the streets of Bangkok. Here she encounters Anderson Lake, a man who seems all too interested in the seedbank information one of her clients has shared. As compensation for this information, he gives her something she’s never imagined: news of a place where windups live in harmony without masters; a dream that consumes her and drives her to act as no domestic windup ever should.

Anderson Lake is a wealthy, if despised, foreigner looking for access into Thailand’s coveted, unmodified seedbank. He uses his work as a kink-spring factory manager to cover up this mission. His secretary, Hock Seng—a refugee of the destroyed Malayan Chinese—has no love for his employer, and is constantly looking for ways to steal plans to the factory’s most lucrative product, in an effort to secure for himself the future he’s always wanted.

But as political pressures begin to rise, suddenly a bribe isn’t enough to keep Anderson’s problems as bay. Filled with gang lords, corrupt politicians, and men who live as gods, The Windup Girl paints a violent picture that is difficult to forget.

From the first page, Paolo Bacigalupi establishes a world so vividly different from our own, that we as readers are forced to accept it as truth. Instead of wasting time on tedious backstory, the author plunges headlong into what could be called one of the most well-developed worlds in science fiction today. This world is complete with a new political structure, social customs, history, and slang.

The Windup Girl hosts a diversity of characters, each with their own agenda, operating as separate entities, rather than as a whole cast working toward a sole objective. Because of this, they act more like people than characters and behave in an accordingly human fashion that can only be described as predictably unpredictable.

Bacigalupi’s prose is very fine, having been whittled down to a dramatic, yet succinct, style that is as unique as the storyline it presents. And although the author is prone to repeating himself, this flaw stands as a way to acquaint the reader with particulars of the story that would have otherwise been lost to all but the most keen.

Unfortunately, The Windup Girl is a story so complicated it will easily alienate casual readers. Even those more experienced within the genre may feel as though they are floundering for the first hundred pages. Much of this is due to the fact that, because of the nature of this novel, the reader will miss important details if their attention wavers for even one paragraph. And because of the particular style of Bacigalupi’s prose, the reader may have difficulty following, or identifying with, any one thing. Add to this the often unexplained Thai words and slang terms, and newcomers to science fiction will most likely feel compelled to stop reading early on.

Aptly classified as “biopunk,” The Windup Girl fills the earthen gap in a world of technologically-based science fiction. And with its sweeping plot, and an ending that proves thought-provoking to even the most cynical of readers, Paolo Bacigalupi’s award-winning offering will intrigue devotees of the genre for years to come.