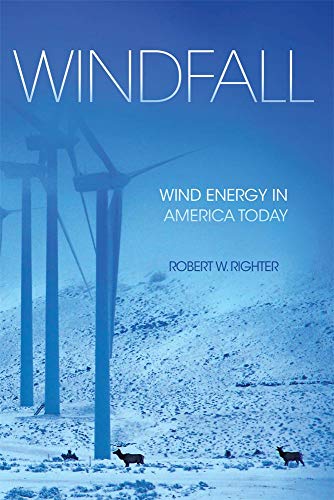 In medieval England the violent winds that tore through the woodlands on a lord’s estate brought bounty to the local peasants. For a time, they were allowed to the lord’s lands and carry away fallen limbs and trees that they could use to heat their dwellings and cook their meals. This practice gave a positive spin to the term “windfall” that persists to this day. It also makes it a good title for Robert Righter’s book about wind energy, for wind is a free energy source readily available to anyone with the ingenuity to capture it.

Ironically, the technology we use today to generate electricity from this “free” energy source costs several million dollars per unit.

No one who has stood beneath the towering rock formations of Utah’s Arches National Park near Moab, Utah can doubt the wind’s power to shape the landscape. Today, however, it is reshaping it in a new as forests of towering wind turbines spring up across the rural landscape. Not everyone is resigned to these changes, particularly many of those forced to live in the shadow of towering 400-foot wind turbines.

Wind energy has drawn battle lines that have not only divided urban centers, where energy is mainly consumed, from the countryside where the turbines are situated, it has, remarkably, pitted one set of environmentalists against another.

Unlike many other books about this topic, Windfall gives ample space to the concerns of some of wind energy’s opponents, the people kept awake at night by the low but relentless sound of the turning blades. Author Righter looks at their arguments with an open mind and considers where and how compromises may be found.

While it does provide enough data and specifications to give the reader a grasp of the factors involved, Windfall is by no means either dry or overly technical book. It is, in fact, a history of modern wind technology, which the author has enlivened by profiles of, and interviews with, some of the pioneers that have helped bring it closer to the mainstream and colorful characters involved in the energy debate. Mr. Righter also provides enough background on competing energy technologies to view wind energy within the context of the total energy picture.

The problem is that we use too much energy. Environmentally sound sources, basically those provided by wind, sun, and water simply cannot meet our energy needs. Mr. Righter suggests that wind energy will never exceed 25% of U.S. power needs. And wind-generated electricity only flows when the wind blows.

The author gives some useful background on some of the ways the industry is working on to store that energy for later use, but for the foreseeable future baseline power will be met by plants that run on coal, natural gas, and nuclear energy.

Coal, of course, has tremendous environmental costs. It not only pumps out major air pollutants, mainly sulfur dioxide and nitrogen oxide, it releases into the contemporary atmosphere CO2 gas that had been safely sequestered deep in the Earth for millions of years. While coal is possibly the worst, all energy technologies have undesirable consequences attached to them. The author provides a fairly balanced and objective overview of what they are and how they may impact our future.

One thing Mr. Righter makes clear is that the development of clean energy technologies will depend on significant government support. Take away government subsidies and one by one the great blades of America’s wind turbines will cease to turn.

Progress to date has depended not only on direct grants, but legislation. Feed-in tariffs create an incentive for utilities to use electricity from renewable energy providers. It took the 1978 Public Utilities Regulatory and Policies Act (PURPA) to give alternative energy technologies access to the power grid.

Building new energy platforms will continue to need government help for the foreseeable future, and though critics may complain about it, they also tend to overlook ongoing government support for the oil and natural gas industries. The bottom line message is that keeping the lights on is going to cost money.

As to the book’s weaknesses, some of the information seems a bit repetitious, and it appears to lose direction in its final chapters just when the reader would expect the focus to tighten. This is a defect that will trouble few readers, however, given that by this time Mr. Righter’s real work has been done—and done admirably.