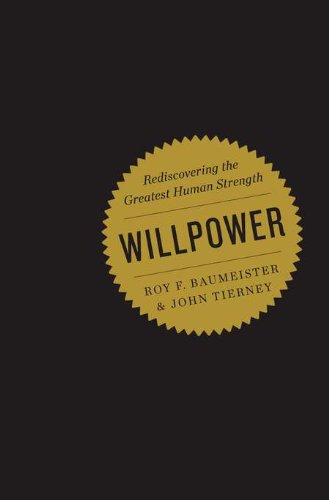 “Willpower combines research descriptions, summaries of findings, and discussion of the application of the research with stories featuring celebrities such as Oprah Winfrey to facilitate readers’ rediscovering their own willpower. . . . Willpower is highly relevant to all motivated, ambitious individuals who aspire to excellence.”

“If you can fill the unforgiving minute with sixty seconds full of distance run . . .” commences Rudyard Kipling’s classic poem “If.” He concludes that those who can, indeed, do all that he prescribes, possess esteemed character. What does it take to pursue “sixty seconds full of distance run”? Willpower. Is willpower in plentiful supply? No. Self-control not only is least frequently identified by people as a strong personal character trait, but also most frequently cited as a character defect.

Willpower is an important addition to the large, ever popular self-help literature. Concurrently, self-control shortcomings carry with them great negative consequences: disappointing academic outcomes, poor job performance, financial setbacks, even prison. The authors claim that mastering willpower self-control is the surest way to a better life, for improving self-control is a high leverage focus of personal improvement, offering the greatest rewards.

This book’s fusion of scientific research and science journalism differs from so much of the self-improvement literature, much of which offers techniques supported by no more the author’s own personal success story, which success may not have been at all attributable to the techniques being advocated.

Willpower is anchored in the foundation of scholarly research, much of which Dr. Roy Baumeister, a prolific and highly regarded psychology researcher, has personally undertaken, and the authoritative science reporting by John Tierney, the New York Times science columnist, well known for the discernment and context that he applies in his reporting.

This scientist/journalist pairing overcomes the shortcomings of many big idea nonfiction books by journalists that are neither scientific in their methodology nor sufficiently grounded in the authority of the research of the discipline. As well, academicians, often disconnected from the reality of daily life, often pursue rigor at the expense of relevance, delivering a dry, less than engaging presentation. By contrast, the presentation of Willpower combines research descriptions, summaries of findings, and discussion of the application of the research with stories featuring celebrities such as Oprah Winfrey to facilitate readers’ rediscovering their own willpower.

The authors develop the theory that too much emphasis on high self-esteem can breed self-satisfaction, diminish self-discipline, and dilute motivation. Permissive parenting—evidenced by adults lacking the inclination or capacity to discipline their children—discourages development of self-discipline. While at the individual level, these conditions represent opportunity for competitive advantage, from the perspective of country competitiveness at the global level, the implications are starkly troubling.

The authors discuss four types and contexts of willpower: thoughts, emotions, impulses, and performance. Their thesis is that willpower per se is a finite resource, for if deployed in one activity, it is less available for others. Your ability to apply self-control is influenced by food: hunger diminishes willpower; sleep: fatigue reduces your self-control; self-awareness: more is better and less not so: and stress: willpower is inversely related, for stress diminishes willpower.

But there is much that can be done to enhance willpower through intentionally of training just like strengthening a muscle and to create conditions to maximize the positive application of willpower while minimizing its diminution.

Among the fascinatingly provocative research findings presented in this book is how stress, both that recognized and unrecognized, leads to a deterioration of the quality of decisions. People under stress frequently default to the easier—either inconsistent with their prior decisions, overtly suboptimal, or even undesired—choice.

Either consciously or unconsciously lacking the willpower to apply the work involved in applying the decision rules appropriate to the situation, those under stress may accept a counterparty’s recommendation or passively disregard the right action, favoring instead a path that involves less work, even though the destination is less than rewarding.

Fewer long-term goals are more conducive to exemplary willpower than many short-term goals. Longer time horizons, fewer decisions, fewer/easier choices, and focus on a larger, higher purpose goal all contribute to more self-control. Avoiding distractions and temptations, making public commitments and seeking conditions that make it impossible to fail, and not compromising your self-discipline by alcohol and other substances are important factors that lead to greater self-control.

Willpower is an important book, deserving of a wide audience, for its message is relevant to all. Willpower is highly relevant to all motivated, ambitious individuals who aspire to excellence. This book is especially valuable for leaders of any enterprise aspiring to excellence delivered as a consequence of disciplined, reliable performance under exacting circumstances.

Thus, entrepreneurs, executives, coaches, athletes, and artists will find both much illuminating insights into what contributes to superior self-control and also considerable practical application guidance here. Others who might gain much from this volume include educators, marketers, strategic advisors, as well as organizational consultants, coaches, and therapists.