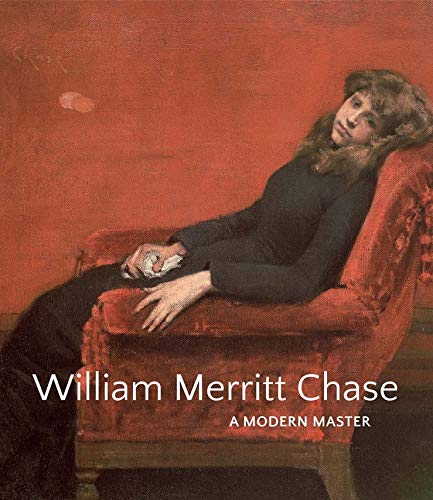 William Merritt Chase (1849–1916) is a pivotal figure in the history of American art. He was a contemporary of James Whistler and John Singer Sargent. During his lifetime he encompassed many roles: rebel, expatriate, academician, and teacher. Educated in Munich and influenced by the muscular realism of Franz Ritter von Stuck, he would usher American art into the dawn of Modernism. By the end of his life, he had founded the Chase School (later becoming Parsons The New School for Design). Among his students were George O’Keeffe, Edward Hopper, and Frank Stella.

William Merritt Chase: A Modern Master by Elsa Smithgall and others is an exhibition catalog published to coincide with the traveling exhibit of the same name. The exhibit appeared at The Phillips Collection, Washington, DC; Museum of Fine Arts, Boston; and Ca’ Pesaro–Galleria Internationazionale d’Arte Moderna, Venice, the first starting in June 2016 and the last ending in May 2017.

The Directors’ Preface announces that “This exhibition is the first retrospective on Chase in thirty years and the first since the publication of the four-volume Complete Catalogue” written by Ronald Pisano in 1983. Like other exhibits involving multiple sites and hundreds of works borrowed and owned by private individuals and public institutions, William Merritt Chase is a monumental achievement. Beneath the beautifully arranged images and polished interpretive gloss lay countless hours of bureaucratic wrangling, administrative coordination, and lots of paperwork.

The Philips Collection, Washington, DC “in association with” Yale University Press has assembled an impressive exhibit catalog. Five analytical essays examine Chase “From Rebel to Crusader,” his use of women models, his teaching career, his international style, and the role of Venice in his career. A “Catalogue of Works” follows, an extensive Chronology, and a Selected Bibliography. Short of actually visiting the traveling exhibit, the book illuminates each painting with high-quality reproductions of the paintings. In early works like The Leader painted around 1875, the oil is seen crazing on the canvas. (Crazing is the technical term for a network of fine cracks on the surface.)

William Merritt Chase adapted the techniques and subject matter of the Old Masters to the popular demands and expectations of the late 19th century. The painting My Infanta (My Little Daughter Helen Velazquez Posing as an Infanta) from 1899 is a case in point. As Erica E. Hirschler asserts, “Chase wanted to recraft Velázquez’s work in the spirit of his own age. . . . Chase and his wife dressed their daughter Helen Velasquez as a Spanish infanta. Chase painted Helen in the same costume in 1899, but his picture could not be mistaken for the Spanish master’s work. Instead, with its soft focus and Helen’s distant expression, Chase’s canvas communicates a very modern sense of a young girl’s personal ambiguity quite distinct from Velázquez’s assertive princesses.” Ms. Hirschler, the Croll Senior Curator of American Paintings at the Museum of Fine Arts, Boston, distills Chase’s practice, saying, “Through his multiple performances of the old masters, Chase embraced the new.”

Throughout his long career Chase produced works in a variety of styles and subject matter. He painted portraits, landscapes, and still life, all with equal skill and flourish. When he began his career, his work closely resembled the heavier and darker German artists like von Stuck. As his career progressed, he would mimic and adapt a variety of artists, influenced by artists like Anthony van Dyck and Diego Velázquez.

In Europe an avant-garde group of Belgian artists calling themselves Les Vingt (The Twenty) was founded by Octave Maus. As John Davis writes in the essay, “William Merritt Chase’s International Style,” “The founding document of Les Vingt is a single sheet signed by thirteen of the eventual twenty members at a meeting held at a Brussels tavern. Scrawled on the verso are the names of the artists suggested for inclusion in the first exhibition, among them three Americans, Whistler, John Singer Sargent, and Chase. How did Chase, the only one of the three who not an expatriate resident in Europe, come to the attention of the Belgians?” Mr. Davis, who works for the Terra Foundation for American Art, traces the recognition back to an essay Maus wrote “on the modernity of Hals, in which he lauded ‘the young Franco-American school,’ mentioning Whistler, Sargent, and Chase by name—a sign of the degree to which Chase had become associated with French art.”

Beyond his art and his influence, Katherine M. Bourguignon (also from the Terra Foundation), writes a compelling essay on Chase’s equally influential teaching career. “Hundreds, thousands, of students caught the Chase fever and enrolled in his classes in New York, Brooklyn, and Philadelphia. […] His quick, quotable, and often harsh comments became legendary. They were practical and philosophical, sometimes caustic, and always respected.”

Even though Chase begin his career as a brash rebel, shaking up the artistic establishment, he grew into another role as beloved teacher. He approached teaching not simply as a means to impart knowledge in easily digestible chunks, but as a sought-after performance. Sessions were infused with drama and daring. In the age before refrigeration one of his most memorable stunts involved painting the still life of a fish before it spoiled. His speed and liveliness recall another famous art teacher, Bob Ross.

William Merritt Chase is a lesser star in the constellation of modern American painting, but this status of lower degree does not diminish his contributions both as a painter and as a teacher. William Merritt Chase: A Modern Master brings together an impressive academic machinery to provide a multifaceted understanding of this American proto-Modern.