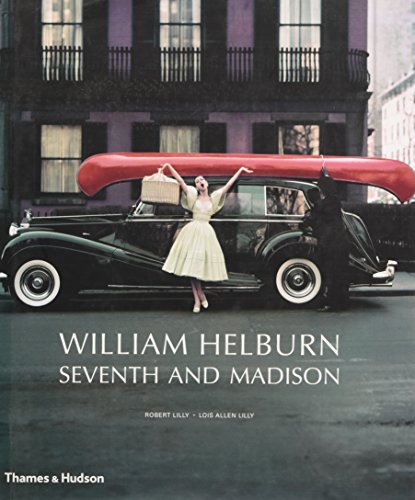 “. . . a treasure for those who consider themselves fashion obsessed . . .”

Once again this season we find a book that surprises and delights while celebrating one of those rare fashion stars who may only be known to the very savvy. William Helburn: Seventh and Madison breaks the mold of this genre by differentiating itself from most due to the approach taken in the telling of this brilliant photographer’s life and modus operandi.

The story of William Helburn is told in his own voice as well as by those who knew his genius intimately. Mr. Helburn was one of those who you might call an unsung hero, at least to the general public, but to those who counted in his professional life, he was the “ go to guy” if you wanted to get the job done right and get it done quickly. He was also the consummate professional . . . well most of the time.

Helburn, who is still with us, stood out from the flock in many many ways, but the most intriguing is that he eschewed any type of fame by asking not to have his name attributed to any photo in a publication like Vogue or Bazaar. You must admit that this alone makes the man an original especially when you consider that today everyone is vying for the spotlight. When you read this entertaining and intimate portrait of William Helburn you will discover his raison d’etre.

Another outstanding characteristic of the book is that we are invited into his private life which, while somewhat complicated, surely fits the mold of what so many believe to be the life of a fashion photographer—think Blow Up and Funny Face. The tenor of the book makes for great reading as it is filled with accolades and remembrances from his colleagues, yet the book never comes off as sappy or melancholy as you sense the total honesty that each contributor expresses.

If you want to get a sense of William Helburn, the man, think of this comparison: Helburn was to photography and fashion what Steve McQueen was to acting and Hollywood. There seem to be so many parallels that can be drawn between the two but you will need to spend some time with the subject and get into his head while immersed in the book to discover these similarities.

In the end William Helburn: Seventh and Madison is a book that will be enjoyed by so many varied readers. His is the tale of a poor boy who makes it big or the photographer who lives up to his rakish reputation or just the photographer who was an invisible but indelible part of our lives during the 20th century. All of these qualities and so many more make this book a treasure for those who consider themselves fashion obsessed, those who partook of this wondrous era, and just about anyone who has a genuine interest in knowing what makes an artistic genius.